SAN FRANCISCO ― Arlan Hamilton looks at the number of startup investments going to companies run by women, people of color and LGBT entrepreneurs, and doesn’t just see disparity, or inequity. She sees financial opportunity. These startup leaders aren’t simply underrepresented. They’re underestimated. And she is betting on that fact by investing tens of millions of dollars in people and companies that others have overlooked.

Hamilton is the founder and managing partner of Backstage Capital, a Los Angeles-based venture capital firm that has invested nearly $5 million in 100 companies led by these underrepresented founders.

If you’re a fan of Gimlet Media’s StartUp podcast, which devoted an entire season to Hamilton and Backstage Capital, you know her as the former concert tour manager who worked her way into the world of venture capital through pure hustle and grit — teaching herself the business through books, blogs and YouTube videos, building her firm through loans and hard-won investments, and sleeping at the San Francisco airport when she wasn’t able to afford a home.

But numbers are at the heart of her story. On this episode of the Numbers Geek podcast, we talk with Arlan Hamilton about the numbers that frustrate, motivate and inspire her — such as the less than 10 percent of venture capital dollars that go to underestimated founders, the 100 startups that Backstage has backed, and the $36 million that the firm has pledged to invest in black women founders through the “It’s About Damn Time Fund.”

We also check in with our Resident Numbers Geek, former Microsoft CEO Steve Ballmer, to explore the numbers behind economic mobility and race in the United States.

We met with Hamilton at a Backstage Capital investor day in San Francisco this fall. Outside the conference room where we talked, the space was buzzing with conversations between investors and startup founders in Backstage portfolio, or “headliners,” as the firm describes them. Backstage had just announced plans for a new four-city Backstage Accelerator program, and Hamilton was featured on the cover of Fast Company magazine, peering out from the airport newsstand as I flew down from Seattle to meet with her.

Is this real life? I’m the October COVER of @FastCompany! Also the first Black woman who isn’t an entertainer/athlete (@Oprah, @serenawilliams, @Beyonce, @LenaWaithe — my favs!) to be on the cover. I never could have imagined this 3 yrs ago? SO grateful. https://t.co/KInpR6TRxr pic.twitter.com/2YlpsILfsI

Listen above and keep reading for highlights, numbers, trends and charts from this episode.

“If you can put some money behind people who have no access to it, or minimal access to capital, and are also doing quite a bit on their own, just out of necessity or out of, ‘This is what I think should be done,’ it stands to reason that some of those companies will do well with more capital or with more resources,” Hamilton says. “If you are the one, or part of that movement that gets to contribute to that, to me it really was a numbers game. It really was a logical conclusion to me.”

About 2.2 percent of venture funding goes to all-women founders, and 0.2 percent goes to black female founders.

That is insane. … I’m still shocked by the numbers.

“That is insane,” Hamilton says. “Even with all the work that we’ve done at Backstage, that I’ve done personally, I thought I had seen it all. I hear it all. But I’m still shocked by the numbers.”

Backstage plans to invest $1 million in 36 startups led by black women through the “It’s About Damn Time Fund.” Hamilton confirmed this week that the first investments from that fund are expected to be announced this month.

“We want to change that number, but really it’s about not just doing it on our own,” Hamilton says. “It’s about being an example, setting an example and showing people that there is the deal flow and that it’s high quality deal flow. Being the example, putting our money where our mouth is and going in that direction. I am also a venture capitalist, so I want to have more allocation in these deals that I have access to. As it stands today in the majority of the deals that we have, we could have put in a lot more money if we had it.

She continues, “I hate watching that money either go away to someone else where we are just missing out, where we had a really good positioning that’s enviable positioning, or the deal doesn’t get done because they couldn’t rally enough around it, because people wouldn’t give them the benefit as early as we would. I think when you combine all those things, it just makes a lot of sense for us to be writing these checks and going in and moving forward in this direction.”

The trends in median income in the United States underscore the challenge and opportunity. Earlier this year, I asked Steve Ballmer what one slide he would show President Trump and Congressional leaders if he could only show them one, and he picked this one. 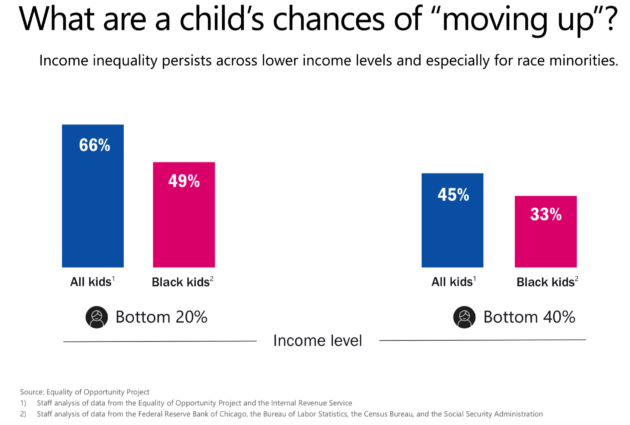 For those born in the bottom 20 percent, he explained, the chances of moving into a higher bracket would be 80 percent in a perfectly equitable system. In reality, as the chart reflects, the chances are 66 percent for kids in the lowest 20 percent, and just 49 percent for black kids.

“To me, if you take a look at this, and you give me one shot, one slide, one thing to say, I say this just isn’t OK,” he said. “Not everybody gets to move up, but everybody should have a shot at moving up. … You can’t believe there’s an American dream if everybody in your neighborhood is essentially not moving up the economic ladder. I think that’s not OK. I think that’s something our leadership needs to focus in on and understand.” 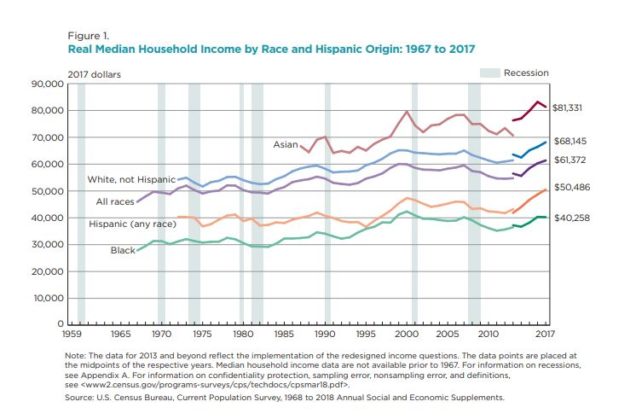 Although a change in survey questions skewed the result, median household income for black Americans has only now returned to pre-recession levels, whereas income for other races exceeded 2008 levels few years ago.

“I think that you’re talking about institutional, systematic things,” Hamilton said after I showed her this chart. “Black and brown folks are set up to lose. I mean, if we’re going to get real … black people were brought here as slaves to, to be animals. … When that didn’t work out for people, they found other ways like prisons and, and other ways to keep us enslaved.

“And while we have evolved so much over the past few decades, and we have, the way that I grew up is very different than the way my mom grew up, and the way that she grew up was very different than the way her mom grew up. While that is true, we were just not supposed to win. So that is why you have to in this country, be Oprah Winfrey to be considered a success. You have to be one of the richest people in the country. You have to go against all odds.

“I personally have to have had the story of being homeless to venture capitalist, investing in 100 people, to even have a chance to be on the radar of the American conscious as someone to be taken seriously in business.

“And when I see this, it makes me sad. And it also tells me again what we’re doing is really awesome. Because what I want to do is cultivate, catalyze hundreds, then thousands, then more than that, future angel investors, future millionaires, future billionaires, future job creators, and current job creators, and generational wealth. And if I and this company have something to do with an uptick in this number one day, that would have been my life’s work.” 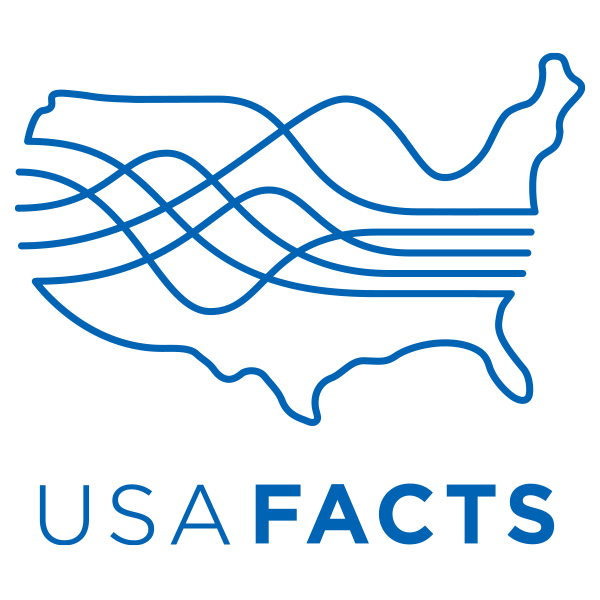