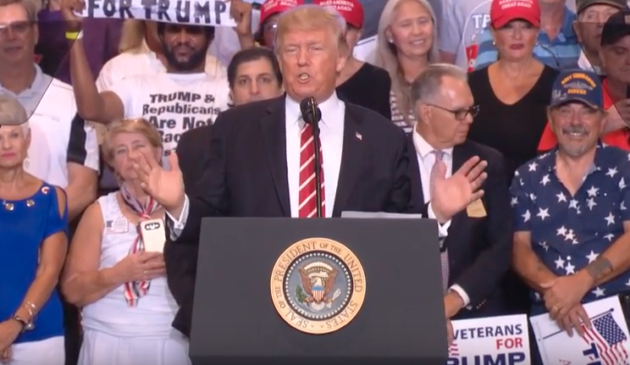 President Donald Trump weighed in on reports that Twitter has been “shadow banning” prominent conservative figures, criticizing his preferred communication platform on the social network itself.

Twitter “SHADOW BANNING” prominent Republicans. Not good. We will look into this discriminatory and illegal practice at once! Many complaints.

The tweet is in response to a report from Vice News that found Republican Party chair Ronna McDaniel, Donald Trump Jr.’s spokesman and several conservative Republican congressional representatives had been limited in search results. Vice found that they no longer appeared in the drop-down search box on Twitter, a practice known as shadow banning that the social network is reportedly using to crack down on hate speech and racism among users.

Vice reported Thursday morning that the issue appears to have been fixed.

Prior to Trump’s take on the report, Twitter CEO Jack Dorsey weighed in, saying in a tweet that “we have a lot more work to do to earn people’s trust on how we work.”

Twitter has in recent months cracked down on accounts that detract from the conversation, specifically trolls. Dorsey in his tweet embedded a thread from Product Lead Kayvon Beykpour, who said that Twitter’s behavioral controls don’t “make judgements based on political views or the substance of tweets,” but instead focus on “account behavior & interactions with other accounts that violate our rules.”

A short thread addressing some issues folks are encountering as a result of our conversational health work, specifically the perception of “shadowbanning” based on content or ideology. It suffices to say we have a lot more work to do to earn people’s trust on how we work. https://t.co/MN97l7w7RF

Twitter has for years now, grappled with how to control the dialog that happens on its platform. In recent months, it has taken a more aggressive stance, banning bots and accounts posting terrorist content.