Every year at the PAX video game expo in Seattle, rather than facing the growing frustration of trying to play big budget games from major publishers in the main hall, I prefer to spend my time taking in as many indie games as possible. Every year after the show I round up my favorite indie games at PAX. This year’s roundup takes the form of the first annual The Tim’s PAX Indie Game Awards, where a variety of games win fame and prestige across thirteen highly competitive categories. Drum roll, please!

In Donut County you play as a hole in the ground. The more you stuff swallow up, the bigger the hole gets, the larger the items you can swallow, and so on. Think Katamari Damacy, but you’re a hole. The art style is delightful, the game is relaxing and quirky, and both my seven-year-old daughter and I loved it (as evidenced in the photo above).

Donut County is out now on Steam and PS4.

Gaze upon its majesty!

The developers of Industries of Titan describe their game as a industrial city building sim/strategy game, set on Saturn’s moon Titan. The gameplay and art style both look great, and I’m really looking forward to playing this one. The biggest thing that stood out about their booth though was the full-color 3D-printed model they had on display of an example city, pulled straight from the game.

You can wishlist Industries of Titan on Steam to be notified when it comes out. The release date is currently being advertised as simply “2019.”

When I saw the name Black Future ’88 I immediately thought of “Back to the Future” and the 88 MPH speed that Doc Brown’s DeLorean had to hit in order to travel through time. When I asked the developer whether that was intentional, he was quite surprised and insisted that he “never even thought of that.”

The game looks gorgeous and challenging. The game’s developer Don Bellenger is based in Oakland, CA and is running the project mostly on his own. Bellenger says he’s aware of the racist usage some have attached to the number 88, but is sticking with his title because “nobody gets to own a number, screw those guys.”

Real-time strategy is a genre that doesn’t get a lot of love lately, so I was pleased to see the cute little viking-themed Bad North on display at the Indie MEGAbooth. While games like Starcraft II are attempting to increase the scale of RTS titles, Bad North has shrunk it down to one tiny island at a time, without losing any of the strategic challenge that RTS players expect. Although the warriors in Bad North are diminutive, the battles can get surprisingly bloody. It’s an amusing juxtaposition.

Also, they were giving away slap bracelets at their booth, so they get bonus points for that.

Bad North is available now on Nintendo Switch, XBox One, and PlayStation 4. It will hit PC late 2018 as a launch title on Discord‘s upcoming PC gaming platform.

Supermarket Shriek is a bizarre racing game that was easily my favorite at Microsoft’s ID@XBOX booth in the main Expo Hall. I had to wait for the pin-seeking crowds to dissipate to be able to play without standing in an hours-long line, but it was definitely worth coming back for.

You race a shopping cart through a variety of bizarrely-laid-out stores. Inside the shopping cart are a man and a goat, whose yells you control by pulling the left and right controller triggers. The further you pull the trigger, the louder they yell. Yell a little louder with the goat, and the cart veers to the right. Yell with the man, and the cart goes left. Perfectly natural.

I love that the game’s name is a reference to the cheesy game show Supermarket Sweep. The Supermarket Shriek website also wins the prize for best story blurb:

Set in a near future dystopian alternate reality universe world (probably) our heroes must go on a journey to discover something deep within themselves and ultimately save save SAVE! On 3 for 2 items in the canned food isle, while stocks last (Ts and Cs apply).

Treadnauts is the perfect kind of game to play with a group of friends on your sofa (you can play it online too). Everyone controls a tiny tank that rolls around a variety of levels in a frantic, rapid-fire shooting match with up to four players at a time.

The Seattle-based team has produced a sharp game with a style that is colorful and fun, and the gameplay is a blast (pun definitely intended).

Treadnauts is out now on Steam, Nintendo Switch, XBox One, and PlayStation 4.

I love puzzle games, and Shift Quantum definitely brings a unique twist to the genre. In the developer’s words, the central game mechanic is to “create negative space by inverting the world and transform barriers into escape routes.” If that’s as confusing to you as it is to me, just watch the trailer above. I played through the whole demo and it was delightful.

Shift Quantum is out now on Steam, Nintendo Switch, Xbox One, and PlayStation 4.

Eastshade‘s Seattle-based develoepr Danny Weinbaum described the game to me as “like Skyrim, but instead of the characters all having problems that can be solved by killing something, their problems can be solved by painting.”

The game is lovely to look at and Weinbaum’s passion really shines through. It’s the kind of world you could easily lose yourself in for hours.

You can wishlist Eastshade on Steam to be notified when it comes out.

Fugl is not so much a “game” in the traditional sense as it is a relaxing, highly stylized bird flight simulator. You’re a bird, and you fly around above a procedurally-generated terrain. When you get close to other animals, you become a different kind of bird, with a different look and a different flight feeling.

Fugl is currently available in Early Access on Steam.

What the Golf! – Golfiest Golfing Golfer

Ever wonder what it would be like if EVERYTHING was golf?!? Well, with What the Golf!, wonder no more! Golf the golfer! Golf a house! Golf from a ninja rope! Golf a round of SUPERHOT, because why not!

Here are the game’s important features straight from their website:

What more do you really need to know.

You can wishlist What the Golf! on Steam to be notified when it comes out.

Untitled Goose Game is probably the game I waited in line the longest to play at PAX. Even though it was tucked away up on the sixth floor far from the flash and frenzy of the main Expo Hall and they didn’t have any “Pinny Arcade” pins to give away, their booth had a consistently full line every time I walked by, all weekend long. Apparently a lot of people have been harboring a latent desire to be a horrible goose.

Untitled Goose Game is currently slated to come out in 2019 on Steam and Nintendo Switch.

The styling of 60 Parsecs! reminds me of the old Sierra adventure series Space Quest with Roger Wilco. In 60 Parsecs! you have 60 seconds to grab everything you need off your space station before you are hurtled into an irreversible mission to a far-off planet. Manage your crew and survive as long as you can.

60 Parsecs! will be released on September 18 on Steam. 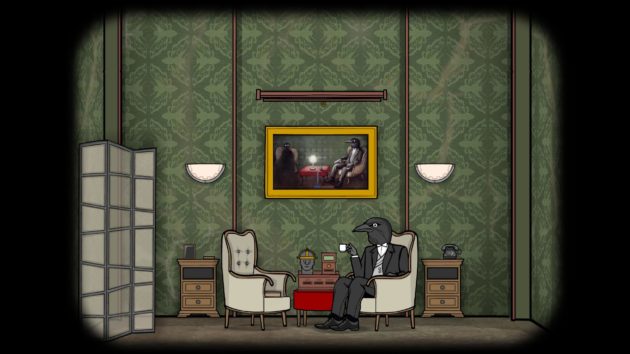 Just look at that sharp-dressed crow.

Cube Escape: Paradox is a room escape game with a very distinctive and memorable style. It is releasing in tandem with a short film of the same name. The developer Rusty Lake raised over $40,000 for the game and film earlier this year on Kickstarter.

The puzzles in their PAX demo were clever and engaging, and the story was intriguing.

Cube Escape: Paradox is coming out on September 20th on Steam, Google Play, and the Apple App Store.

I highlighted all of the remaining games after PAX West last year, so they aren’t eligible to win a prize in The Tim’s PAX Indie Game Awards, but they were back again at PAX this year and they are still great! Some of them are releasing in just a couple weeks, others will be available “when they’re done.”

The Gardens Between will be released on September 20 on Steam, Nintendo Switch, and PlayStation 4.

Light Fingers is an interactive, unfolding board game “played on a magical clockworks game board.” It combines strategy, action, cards, and exploration in a turn-based multiplayer package that just looks great.

Light Fingers comes out on September 20 for the Nintendo Switch. 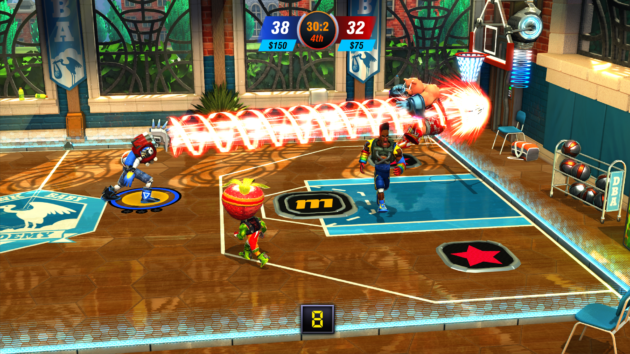 Dunk Lords is basically NBA Jam with in-game cash and between-quarters equipment upgrades. It’s a blast. I just wish they would put out a trailer because you really need to see it in action to appreciate it.

Dunk Lords has no official release date yet.

I still love this clever and cute puzzle-adventure game. Just looking at it brings a smile to my face.

Pikuniku doesn’t have an official release date yet, but they say it will be coming this year to the Nintendo Switch and PC.