Brent Frei is learning how to pick rocks with a robot as he continues to work on his new company, TerraClear. Based on the interest generated by a new funding round, Frei may have picked another winner.

TerraClear raised $5.5 million in a friends and family round that Frei said was intended to raise $1 million or $2 million.

Frei, the co-founder of Smartsheet — the Bellevue, Wash.-based company that went public in April — has been working on the Idaho farm where he grew up, developing a machine that he hopes will someday remove troublesome rocks from the land used to grow crops. He shed light on TerraClear this spring, and Thursday told GeekWire what the new funds will do.

“It’s capital to do all of our prototyping and build out the team and go bigger faster,” Frei said. “So far a lot of the design work we’ve been doing and the early prototyping, both of scale models and of life-size models, is pretty encouraging. It’s a lot of fun. It made a lot of sense that we raised more than we were originally intending to because it’ll definitely be necessary as we get closer to a production product.”

Frei plans to be in Idaho most of the summer and his team wants to have a working prototype by fall. Toiling on his parents’ farm in the town of Grangeville with his kids in tow, Frei said it’s a whole different world for them.

“They’re driving tractors, riding horses, moving cows around. What people do for vacation is what we do for a living,” he said.

His previous living was made in software. Before co-founding Smartsheet in 2005 to help businesses manage and automate key work processes, Frei was CEO of Onyx Software. TerraClear is a new direction.

“This is the first one that has a physical hardware, an actual thing along with the software, so that’s been a new experience,” Frei said. “It’s really fun to have something you can put your hands on, you’re welding and drilling holes in. It breaks and you’ve got to re-weld it. That’s very different, and more in line with my farming background. That was another reason for the more capital — when you’re building a software company it’s largely just people, but when you’re doing one that has a physical product as well, there’s a lot of capital expense that goes into the prototyping and the build and the design and the tools that are required.”

And in building what he previously referred to as a “Roomba for rock picking,” Frei is learning a whole new set of skills.

“I know a lot about software and I used to be a programmer, but it’s a whole different world in the neural net, robotics area,” Frei said. “I’m so pleased with the team, the sort of eclectic and interesting skills that they brought, some of them were really unexpected. Mike Racine, it turns out, he’s an expert in photography. So when we were trying to get better resolution from our drone images he was the guy who figured it out, not the third-party companies that do it for a living.”

Racine, who worked with Frei at Microsoft and built the services organization for Onyx, shared the below images, which show rocks that have been run through TerraClear’s inference engine. Racine described the process of developing that engine like so: 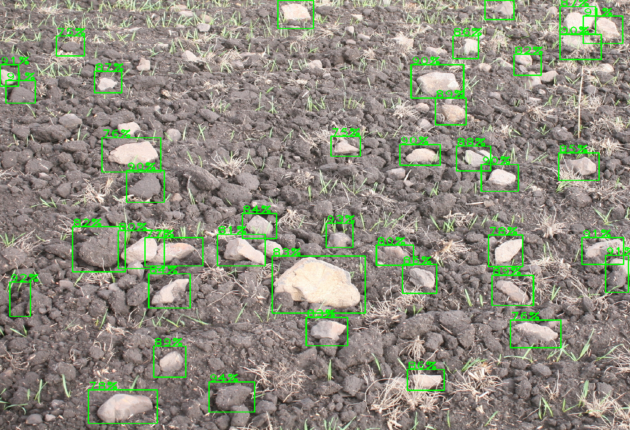 Aside from the progress TerraClear has made, Frei is also pleased that his own parents are back on board as notable investors in this funding round.

“They’ve been in every one of my companies and most of the time they had to or else I couldn’t have gotten it going. They’re the secret sauce. They’re the ones who seem to be my good luck charm,” Frei said.

Months into the process of trying to revolutionize one aspect of the farming industry, Frei laughed when asked whether the rocks feel like they’re getting any lighter.