When it comes to teens and social media, it’s not all pressure and drama. But there is a fair amount of both — apparently outweighed by the benefits of teens feeling connected and supported.

A new Pew Research Center study of youth ages 13 to 18 released on Wednesday finds teens credit online platforms like Instagram, Snapchat and Facebook with strengthening friendships (81 percent), letting them interact with a more diverse group (69 percent), and feeling as if they’ll have support during tough times (68 percent).

Teens do report downsides, but at lower percentages. Negatives include feeling overwhelmed by all of the drama (45 percent), pressure to only post what makes them look good (43 percent), and pressure to post content that gets lots of likes and comments (37 percent).

Overall — and by what Pew calls “relatively substantial margins” — teens tend to associate social media use with positive instead of negative emotions. 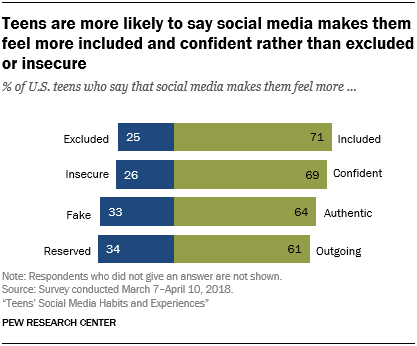 Pew Research Center’s “Teens’ Social Media Habits and Experiences” report, which was based on a survey conducted in March and April of this year, also found that teens post about personal accomplishments, their family, and their emotions and feelings far more than about religious or political beliefs.

What gets posted does vary by age and gender. Older teens post more about romantic relationships, and girls say they post more about their feelings, and emotions and families, than boys.

And that supposedly never-ending stream of selfies? Not so much. Only 16 percent of teens say they post selfies “often.” 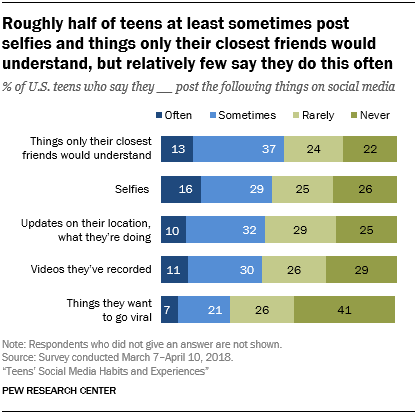 But teens are on social media, a lot. Sixty percent of those surveyed say they get together with friends online every day or almost every day. By comparison, only 24 percent say they get together with friends that frequently in person. Another Pew report earlier this year found that 89 percent of 13-to-17 year olds were online at least several times each day.

The Pew study’s emphasis on benefits over drawbacks of social media appears in line with a September report by Common Sense Media. In that national survey, Common Sense said teens are more likely to view social media as a good thing in their emotional lives.

Mike Robb, Common Sense’s senior director of research, told GeekWire at the time that many people were likely to be surprised by the large number of positives attributed to social media. “I think the data showing that kids are far more likely to say that using social media makes them feel less lonely, less depressed, more confident, and better about themselves is the most counter-intuitive, given what most people’s perceptions are about social media,” he said.