When Saba Mohebpour created an online store to sell smartphone accessories, he became frustrated with the time and effort it took to maintain proper inventory and negotiate discounts with suppliers. That’s why he came up with the idea for Spocket, a Vancouver, B.C.-based startup that provides small online retailers with a way to access products on demand and scale their businesses.

“I dreamt of a platform where I could easily find thousands of products, with prices that are already negotiated and heavily discounted, without risk of holding an inventory of products,” Mohebpour said. “So that’s what I built.”

Spocket is one of 10 startups participating in the current Techstars Seattle cohort, though Mohebpour has been forced to stay in Vancouver.

As GeekWire previously reported, Mohebpour couldn’t join the rest of his colleagues in Seattle due to President Trump’s travel ban. Mohebpour has lived in Canada for more than five years and has been cleared for visas in the past, but he is an Iranian citizen. Iran is one of the countries included in the travel ban list.

The ban does allow affected people to apply for waivers in certain circumstances, including business trips to the U.S., but Mohebpour hasn’t heard anything from officials in regard to his applications.

“Techstars provided all requested documents, contacted local congresspeople and supported Saba’s efforts to obtain information around his visa application status,” Techstars said in a statement. “Despite this, he has not been issued a visa, and we remain in the dark about the status of his application.”

Not being in Seattle has been difficult for Mohebpour, who won’t have a chance to rub elbows with other Techstars founders and build a rapport with potential investors and mentors.

“Immigrants are a huge driving force behind the U.S. economy at every level, and we all lose when talented people from any background are prevented from entering the country and putting their skills and energy to work,” said Chris Devore, Techstars Seattle managing director, in an email earlier this year. “We’re doing our best to not let a short-term aberration in our national immigration policy prevent Saba from building a big valuable business that will have a positive impact in the world, and in the U.S., and we fully expect our national elected leadership to recognize that and restore more immigration-friendly policies in the longer term.”

Continue reading for Mohebpour’s answers to our questionnaire for this Startup Spotlight, a regular GeekWire feature. 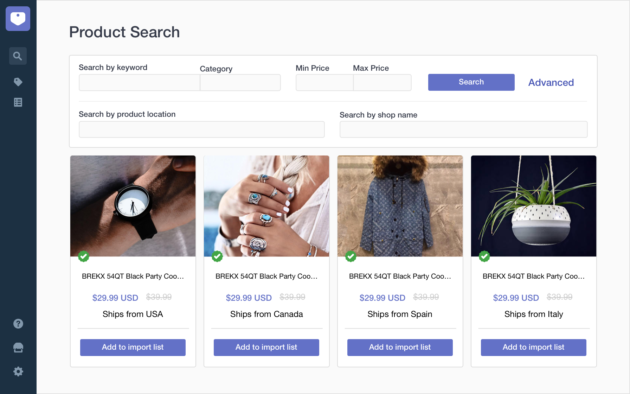 Explain what you do so our parents can understand it: “Spocket helps independent online retailers focus on marketing and building their brand, rather than sourcing products.”

Inspiration hit us when: “I was building my own e-commerce store when I realized how time-consuming and difficult it is to find products. I had to contact more than 400 suppliers and makers to ask for collaboration and product discounts, and I couldn’t afford to purchase products in bulk.

I started Spocket to help small online retailers, many of whom already have an audience or are influencers on social media, source and sell highly discounted products without having to deal with inventory or logistics. Currently, there are over 13,000 online stores sourcing products on Spocket.”

VC, Angel or Bootstrap: “VC and angel. We needed their support to move fast in the market.”

We’ve built a machine learning algorithm that determines the best products to suggest to our retailers, based on thousands of transactions, product popularity, customer preferences and location.

Our ‘secret sauce’ is: “We’ve built a machine learning algorithm that determines the best products to suggest to our retailers, based on thousands of transactions, product popularity, customer preferences and location.”

The smartest move we’ve made so far: “We launched Spocket’s beta version three weeks after the idea came up. That helped us to listen to customers and iterate very quickly. Also, launching Spocket on the Shopify platform as the starting point, as they’ve been very supportive of us, has helped us grow tremendously within their ecosystem. Our relationship with Shopify gets stronger every day.”

The biggest mistake we’ve made so far: “For six months, we thought none of our users would pay us. We hesitatingly launched our pricing tiers and boom — over 400 customers started paying in four months.”

Would you rather have Gates, Zuckerberg or Bezos in your corner: “Gates. He is not just a business leader; he dedicates his life to some truly amazing projects through his foundation that focus on saving the lives of many. There’s nothing more inspirational than that.”

Our favorite team-building activity is: “Taking short trips to the beautiful islands of British Columbia have given our brains some much needed rest and been a source of inspiration. We’re also planning on launching internal hackathons next month.”

The biggest thing we look for when hiring is: “Have a willingness to learn, and be always striving to be better today than you were yesterday. It’s fine if you don’t know everything, but you should educate yourself to become the best that you can be in your position.”

What’s the one piece of advice you’d give to other entrepreneurs just starting out: “Turn the disadvantages into strengths. I wasn’t able to participate in the Techstars program in-person due to a new U.S presidential order that prohibits citizens of Iran from entering the U.S. Unfortunate, but that forced us to have multiple internal workshops to educate teammates, who were able to attend and learn more about our business, vision, market, etc. It truly empowered them to represent Spocket and learn the ins and outs of the business.”