Smartsheet beat analyst estimates with its third quarter earnings report, posting $46.9 million in Q3 revenue and a GAAP net loss per share of $0.15. Wall Street expected a loss of $0.16 per share on revenues of $44 million. Shares were up more than 8 percent in after-hours trading.

Revenue was up 59 percent year-over-year for the Bellevue, Wash.-based work collaboration software company, which posted its third earnings report as a public company after it raised $150 million in its IPO this past April.

“Our growth demonstrates that for many of our largest and fastest-growing customers, Smartsheet has become a mission-critical work execution platform that delivers operationally important solutions across their businesses,” Smartsheet CEO Mark Mader said in a statement.

The company’s stock is up more than 30 percent since April. Smartsheet now has nearly 78,000 customers and saw the number of customers with annualized contract values of $50,000 or more grow by 148 percent to 360 in the last quarter.

Mader said the growth related to large customers is a result of adding more features and services to the Smartsheet platform.

“These are driving transaction sizes that are not only larger but solving higher-value problems for customers,” he said on the company’s earnings call. 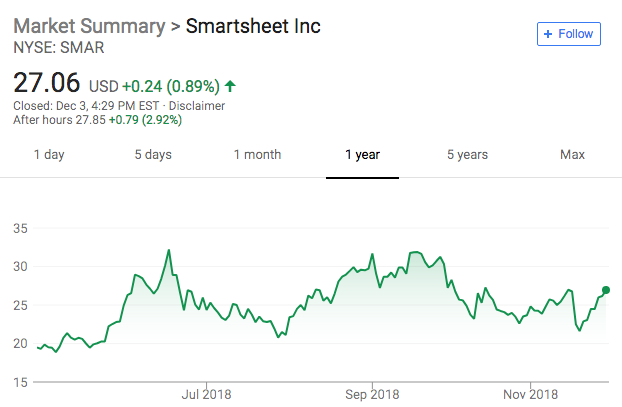 Smartsheet opened a new office in Boston in September with room for 450 employees and surpassed 1,000 employees company-wide. It released a host of new features at its Engage customer conference in October.

A flurry of “work management” tech companies such as Smartsheet are attracting interest from investors both the public and private markets. These companies, which sell cloud-based software that help customers manage projects and collaborate with colleagues, include:

There are a host of other companies such as Slack, Google, Microsoft, Dropbox, Box, and others that are aiming to redefine how we work. Check out a recent guest post on GeekWire to learn more about a fresh crop of productive apps that are trying to reinvent our workday.

Smartsheet was one of four Washington companies to go public in 2018. The others include tax automation company Avalara; e-signature powerhouse DocuSign; and industrial laser maker nLight.