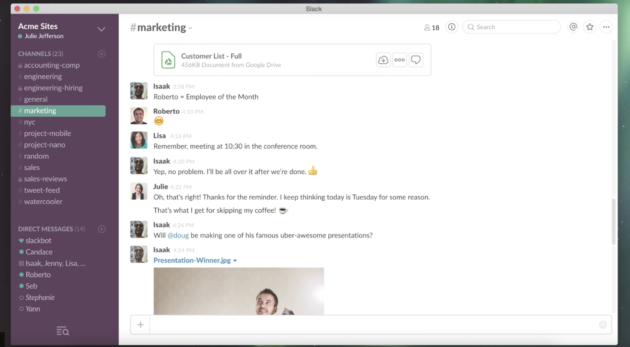 Slack is carving out a nice piece of the business software market for itself thanks to its workplace chat and collaboration app, which now has 8 million daily users, the company plans to announce Tuesday.

That’s a 33 percent jump from last November, when Slack revealed it had 6 million daily users. And 3 million of those daily users are paying for the service, or at least their companies are; 65 percent of Fortune 100 companies are Slack users, the company said.

Selectively disclosing metrics is a time-honored tradition in startup company marketing, and the tactic often diverts attention from other pesky metrics like revenue and cash flow. Slack declined to share any of those details with its latest update Tuesday, but last year it said it was on a path to $200 million in recurring revenue based on 2 million paying users, for back-of-the-envelope math purposes.

Slack is in a very interesting position as its core service grows in popularity. Developers have already built lots of apps and integrations that work with the software, and there’s a solid chance the company could turn its platform into a broader set of workplace tool. Enterprise SaaS powerhouses like Workday and Salesforce have built integrations for Slack, and over 200,000 developers are working on apps for the platform, Slack said Tuesday.

But other enterprise giants have certainly taken notice. Microsoft Teams is a clear response to Slack, unveiled last March and updated this week at Microsoft Build with a new distribution system for internal apps built on Microsoft Teams and support for Adaptive Cards.

Microsoft didn’t spend a ton of time on Teams this week, but it did emphasize its reach across vital pieces of enterprise app software, which it calls the Microsoft Graph. Developers who are already working for companies that have standardized on Office 365 and other Microsoft Cloud products might find it easier to stay within Microsoft’s orbit; 200,000 organizations are using Microsoft Teams, it said in March.

But Slack clearly has a lot of momentum, and it already has 500,000 organizations using the product, it said Tuesday. Slack CEO Stewart Butterfield told The Wall Street Journal that the company is preparing to go public at some point in the future, but that such an event won’t happen in 2018.

Now all it has to do is continue to solve the scaling challenges that cropped up several times during the past year. We’ll have Slack’s Milena Talavera, senior engineering manager, on stage talking about some of that work at the 2018 GeekWire Cloud Tech Summit.