Driving around Seattle, you might’ve noticed an uptick in Texas license plates. That’s what prompted us to look at drivers license data and find out which states the region is importing newcomers from. Could it be that Amazon is bringing in employees from Whole Foods HQ in Austin, Texas, after purchasing the grocery chain last year?

The answer to that question is a resounding maybe. But before we dig into the numbers, let’s back up a bit. Seattle is the fastest-growing American city of the decade, a boom driven largely by job growth in tech and other industries. Seattle has added 114,000 people since 2010, an 18.7 percent jump.

It’s not all Amazon, of course, but the tech giant has played a huge role in driving Seattle’s growth. Over the past decade, Amazon’s worldwide employee count has grown from 20,000 to more than 500,000, with more than 45,000 employees in Seattle.

To understand where Seattle’s newcomers are moving from, we looked at migration data from the Washington State Department of Licensing between 2008-2017. Each year, the DOL publishes a report that shows the number of people who applied for a Washington drivers license and the state where their previous license was issued. For this story, we zeroed in on King County, home to the broader Seattle metropolitan region. 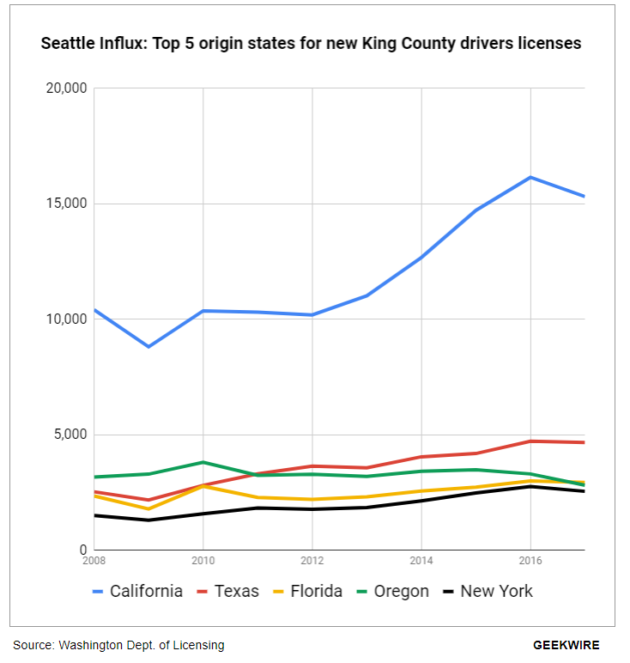 Based on those reports, Texas is the state sending the most newcomers to the Seattle area after California. It isn’t clear whether Amazon is a driving force in the Texas migration. Texas overtook Oregon as the state sending the most people to Seattle back in 2011 and that number has been steadily increasing over the years. Amazon didn’t acquire Whole Foods until 2017, when the trend was well underway. In fact, the number of Texans moving to the Seattle region and applying for drivers licenses actually dipped slightly from 4,727 in 2016 to 4,677 in 2017.

But Redfin economist Taylor Marr says the migration of Texans to the Seattle region is a sign of growing connections between the tech industries in each city.

“It really does go both ways,” he said. “As more people are moving here, more people are also moving there. The economies are just becoming so much more connected in these tech hubs as people move around from office to office.”

California sends by far the most people to the Seattle area but that trend appears to be on the decline. The California transplants peaked in 2016 with 16,155 Californians applying for Washington licenses.

The economies are just becoming so much more connected in these tech hubs as people move around from office to office.

“Housing costs in the Bay Area skyrocketed and therefore a lot of jobs moved to the Seattle area from Northern California,” Marr said.

That shifted in 2017 when the number of Californians applying for licenses in King County dropped to 15,316. The Seattle region has long been a refuge for California tech workers seeking to escape the sky-high housing costs in cities like San Francisco. But after more than a year defending the title of the nation’s hottest housing market, Seattle may not be as attractive as it once was to people looking for a more manageable cost of living.

“The housing market was the most competitive it ever was in all of Seattle’s history last year, especially in the peak of the home buying season in July and it really correlates strongly to what you’re seeing here … All of these housing trends might’ve tamed some of the in-migration of people coming here,” Marr said.

That could also explain why migration from Oregon is on the decline. Washington’s neighbor to the south sent the most transplants after California until 2011. Since then, the numbers flatlined and then began declining. Last year, just 2,821 Oregonians applied for licenses in King County. Of course, people with roots in a neighboring state may be less inclined to switch their licenses over to Washington, opting instead to take care of licensing logistics when back in Oregon.

The DOL cautioned that driver’s license data is an imperfect sample of the overall population. Not everyone who moves to Seattle changes their license or obtains one to begin with. It’s also possible that fewer people are applying for Washington licenses because car registration fees have gone up dramatically. But the DOL reports do provide a snapshot of where people are coming from and the changing demographics of fast-growing Seattle.