Amazon is gearing up for a potentially major expansion in Bellevue, Wash., Seattle’s neighbor to the east, at the same time that it has paused growth in its hometown to see how a proposal for a controversial tax on big businesses turns out.

Amazon is close to taking a pair of buildings in downtown Bellevue, Wash. totaling close to 775,000 square feet. As reported by the Puget Sound Business Journal, Amazon is eyeing Tower 333, otherwise known as Expedia’s corporate headquarters, and a nearby building called Summit III that was started just before the recession but put on ice as the economy went south.

Both structures are within walking distance of Amazon’s current Bellevue office at the 425 Centre building that opened last year. If the tech giant goes forward with these plans, the company would have more than 1 million square feet in Bellevue. 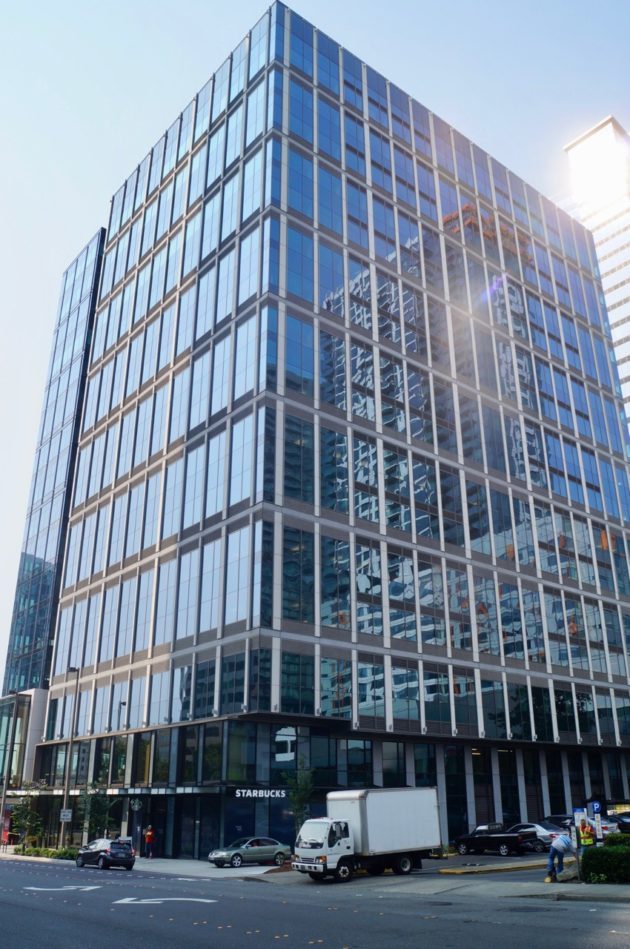 Even before Amazon opened its office in Bellevue, the city where Jeff Bezos originally founded the company out of his garage, the real estate community was buzzing about potential expansion. The retail giant has long been thought of as a likely candidate to take over the Expedia building as the travel giant gets set to move to its headquarters to Seattle in 2019. In an interview with GeekWire last year, Amazon’s Vice President of Global Real Estate and Facilities John Schoettler didn’t confirm anything, but didn’t totally shoot down the possibility of future growth in Bellevue.

“I don’t have a crystal ball; I know that as a company we are going to continue to grow and hire great talent that we find in the Pacific Northwest,” he said. “So I would imagine that you will see us growing on both sides of the lake (Washington).”

At least for now, some of Amazon’s growth on one side of the lake is on hold. Amazon last week halted work on a new office tower on a site known as Block 18 in the Denny Triangle neighborhood. Amazon is also considering sub-leasing its massive Rainier Square office project to another company, rather than occupying it itself, pending the city’s decision.

It’s anyone’s guess whether Amazon will follow through with the threat to slow or stop growing entirely in Seattle — where Bezos famously wanted to stay rather than going out to the suburbs — if the city’s proposed “employee hours tax” passes. But Amazon has already shown willingness to grow in other parts of the region, and nearby cities are urbanizing quickly, adding more density ahead of a massive light rail expansion in the coming years.

The tax plan being considered by the Seattle City Council calls for a 26-cent tax per employee for each hour worked at companies with at least $20 million or more in revenue. That comes out to approximately $500 per employee annually. The city says the tax would raise about $75 million per year for affordable housing and homeless services.

Amazon isn’t the only company putting public pressure on the City Council over the head tax. On Tuesday, more than 130 business leaders signed an open letter urging the city not to pass the tax, and Zillow CEO Spencer Rascoff on Monday called the tax misguided and said it could cause the company to focus its future growth elsewhere.

Amazon is one of a growing list of tech giants to have offices in Seattle and a city on the east side of Lake Washington. Other examples include Google, Tableau Software and Expedia, which will keep some of its Bellevue space after moving the bulk of its HQ workforce to Bellevue.