After spending a couple years working at Zillow as a software development engineer, Joyce Wu thought she had a grasp on what the biggest challenges are when it comes to the housing market. As she set out to start her own company, she learned otherwise.

Wu, 33, is the founder of Cluck, a Chrome extension that helps apartment hunters root out scam listings on Craigslist. The idea came about last fall when she started working on another project — a subletting marketplace for college students.

“We did a bunch of surveys with college students that were moving around over the summer, both looking for housing and trying to find subletters for their units,” Wu said. “The thing that they were telling me was their biggest problem wasn’t what I thought would be their biggest problem. I thought they would be complaining about price and availability, but they didn’t say that. They said they ran into scams, constantly.”

Wu looked into it. She visited the Craigslist sublet section and looked around downtown Seattle and within 20 minutes she said she found five scams.

“It was pretty clear to me that it was a big problem, so that’s sort of why I decided to go in this direction,” Wu said. “One of the big things that I care about personally is economic mobility and a big component to economic mobility is where you live. Which is why helping students find housing close to summer internships was appealing for me, because that’s helping students be closer to their jobs.” 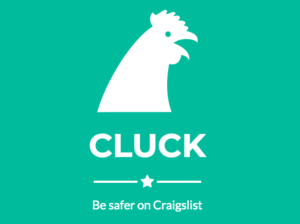 She launched the first version of the extension in mid-January and since then has gotten about 1,000 users and some early traction, mainly from a write-up on Lifehacker.

She bested four other companies with her pitch at a Founders Live event in Seattle last month. GeekWire met Wu at a Female Founders Alliance event last week where members of the organization received feedback on their pitches from reporters and heard from a panel of Seattle-area business and technology journalists.

Cluck works by allowing users to comment on listings, to either warn people away from a potential scam or to identify a listing as legitimate. Reverse image search is a big component of this, as users can see if apartment photos are showing up in other places on the web.

“Right now all I do is link out to TinEye,” Wu said. “They provide reverse image search and I just make it easy to connect a Craigslist image to TinEye. But what I would like to do is use their reverse image search API to basically build a database of verified listings, like listings where I know who owns the image, who the property manager is and where this listing is supposed to be. Then if I see that image somewhere else, then I can warn the user and say, ‘Hey, I know whose image this is supposed to be, this seems a little suspicious, here’s a link to the property that I think this is supposed to be.'”

Scammers generally rob people of a security deposit and down payment for first month’s rent. Not only are people wiring — and losing — thousands of dollars to cover those expenses, but they’re also not gaining a place to live like they set out to do.

Ads for cars and concert or sporting-event tickets are also targets for scams.

Wu, who also spent several years as an engineer at Microsoft, is working by herself on Cluck right now. The company is bootstrapped, although she’s considering raising a small amount of money through a friends and family round to get to the next milestone.

“There’s a few ways this could expand,” she said. “Obviously it’s only on Chrome now, but I could build Firefox extensions. Right now it’s only enabled on Craigslist, but it could potentially be enabled on any website. It’s focused on housing but really you could do this with any type of listing.”

As for the name, Wu said she couldn’t find a domain and was basically down to animal noises.

“Cluck works because it’s like clucking hens, and clucking hens is a euphemism for gossip, and that’s kind of what’s going on,” Wu said. “We’re warning each other about potential scams.”