FRIDAY HARBOR, Wash. — This week’s Salish Sea Expedition is unfolding amid the heavily trafficked waters off the San Juan Islands, but there’s still plenty of room here for scientific discoveries.

For example, researchers riding a deep-water submersible called Cyclops 1 announced that they discovered a new low for the feeding grounds of a prickly marine species known as the red sea urchin.

“We extended the range of red urchins to 284 meters,” Alex Lowe, a marine biologist at the University of Washington, proudly declared at UW’s Friday Harbor Laboratories, which is serving as the base of operations for this week’s expedition.

The expedition aims to assess the health of the habitats and species in the Salish Sea, a body of water that takes in the coastal waterways around the U.S.-Canadian border, from the Strait of Georgia to Puget Sound. The Salish Sea offers a rich ecosystem as well as a tourist destination and an increasingly busy shipping lane, but its murky waters make it challenging to study in depth — and at depth.

To remedy that, the expedition’s organizers are making use of Cyclops 1, a five-person craft that can descend far deeper than scuba divers go.

The survey expedition is a joint undertaking that involves scientists from the UW and other research institutions, with support from the non-profit SeaDoc Society and the OceanGate Foundation. Everett, Wash.-based OceanGate, which built Cyclops 1, is playing the lead role in getting the researchers to their underwater destinations.

On Wednesday morning, Lowe and more than two dozen other team members reviewed the previous day’s dive, and prepared for another outing with a fresh set of researchers. OceanGate’s director of engineering, Tony Nissen, worked to smooth out logistical sticking points.

“Some of us are limited by bathroom breaks and battery power,” Nissen said, half-jokingly.

That day’s scientific objective was to determine how much damage 30 years of scientific trawling had done to the habitat at the bottom of the San Juan Channel. Some experts worry that when sample-collecting nets are repeatedly dragged across the channel’s floor, they churn up so much material that it hurts species diversity.

But when a quartet of graduate students looked out the sub’s 3-inch-thick clear viewing dome on Wednesday, they saw nothing but good news.

The four students and the pilot of Cyclops 1, OceanGate CEO Stockton Rush, spent four hours traveling back and forth, hundreds of feet beneath the surface. Meanwhile, the UW research vessel Centennial and two smaller boats monitored the underwater operation from the surface, getting their information primarily from location readings, text messages and Rush’s calls over an acoustic phone.

At the conclusion of the dive, Cyclops 1 was guided back to its perch on the platform from which it was deployed hours earlier. Then compressed air blew the ballast water out of the platform’s tanks, and the whole assembly rose once again to the surface.

“It’s like you’ve been on another planet,” Rush said as the Centennial towed Cyclops 1 on its platform back to Friday Harbor’s dock. “You’ve spent four hours on this completely alien world, and then you open the hatch, and then you’re back on planet Earth.” 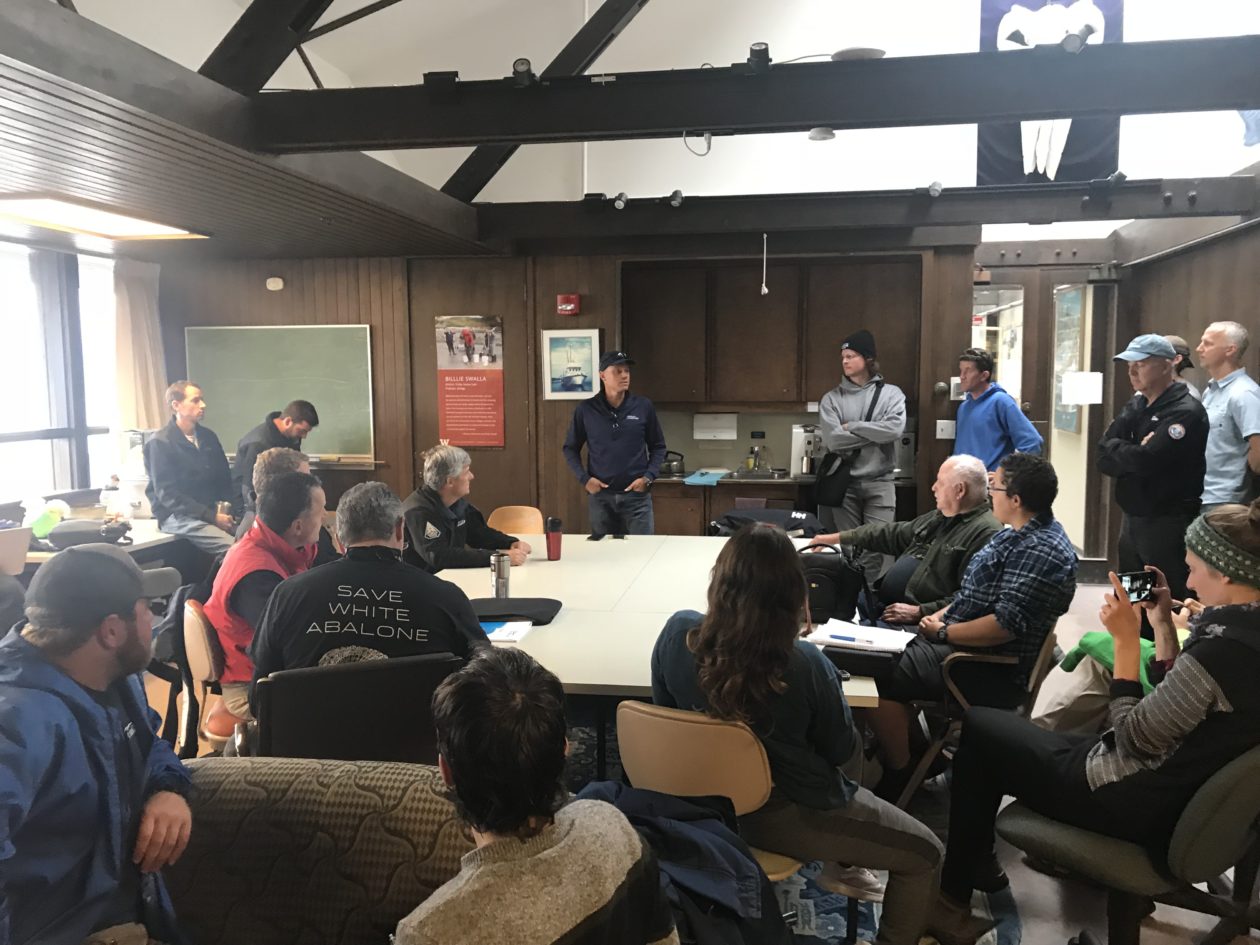 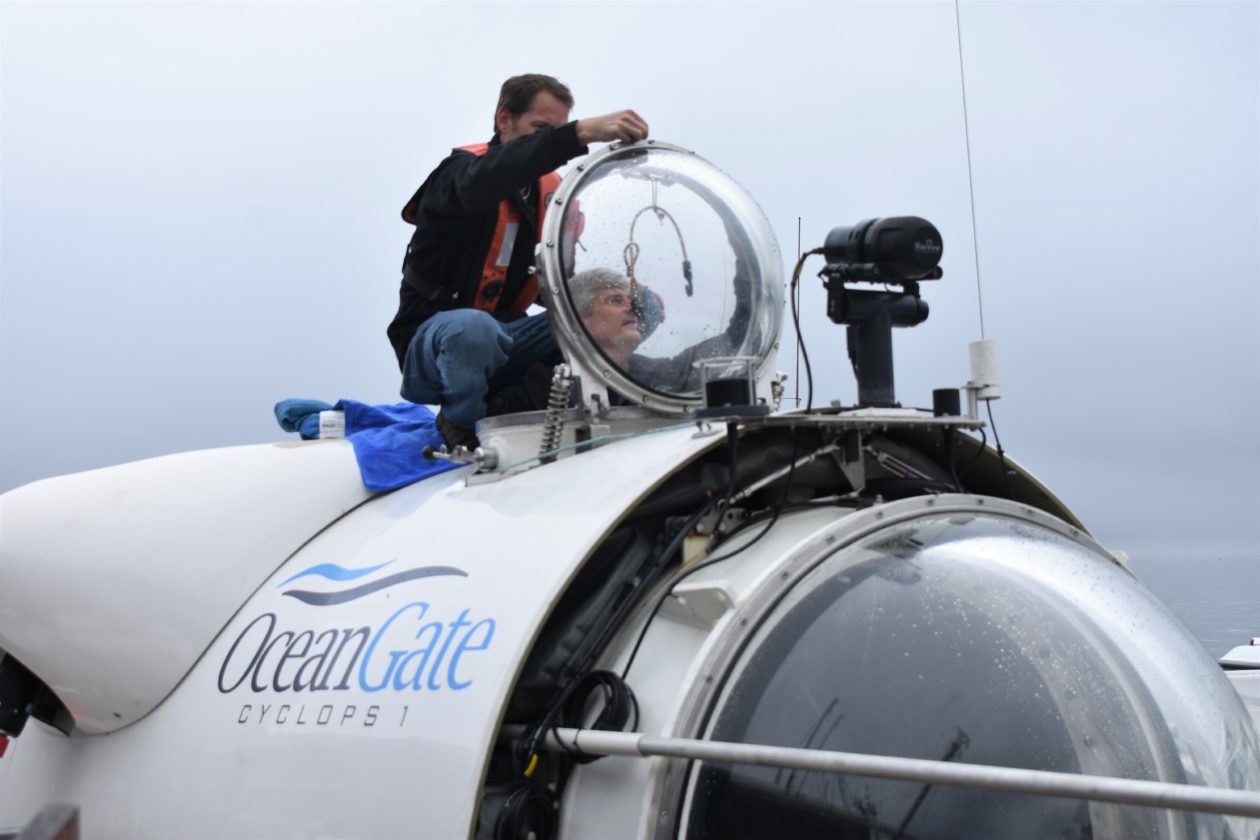 OceanGate CEO Stockton Rush gets a bit of help as he prepares to pilot the Cyclops 1 submersible. (GeekWire Photo / Alan Boyle) 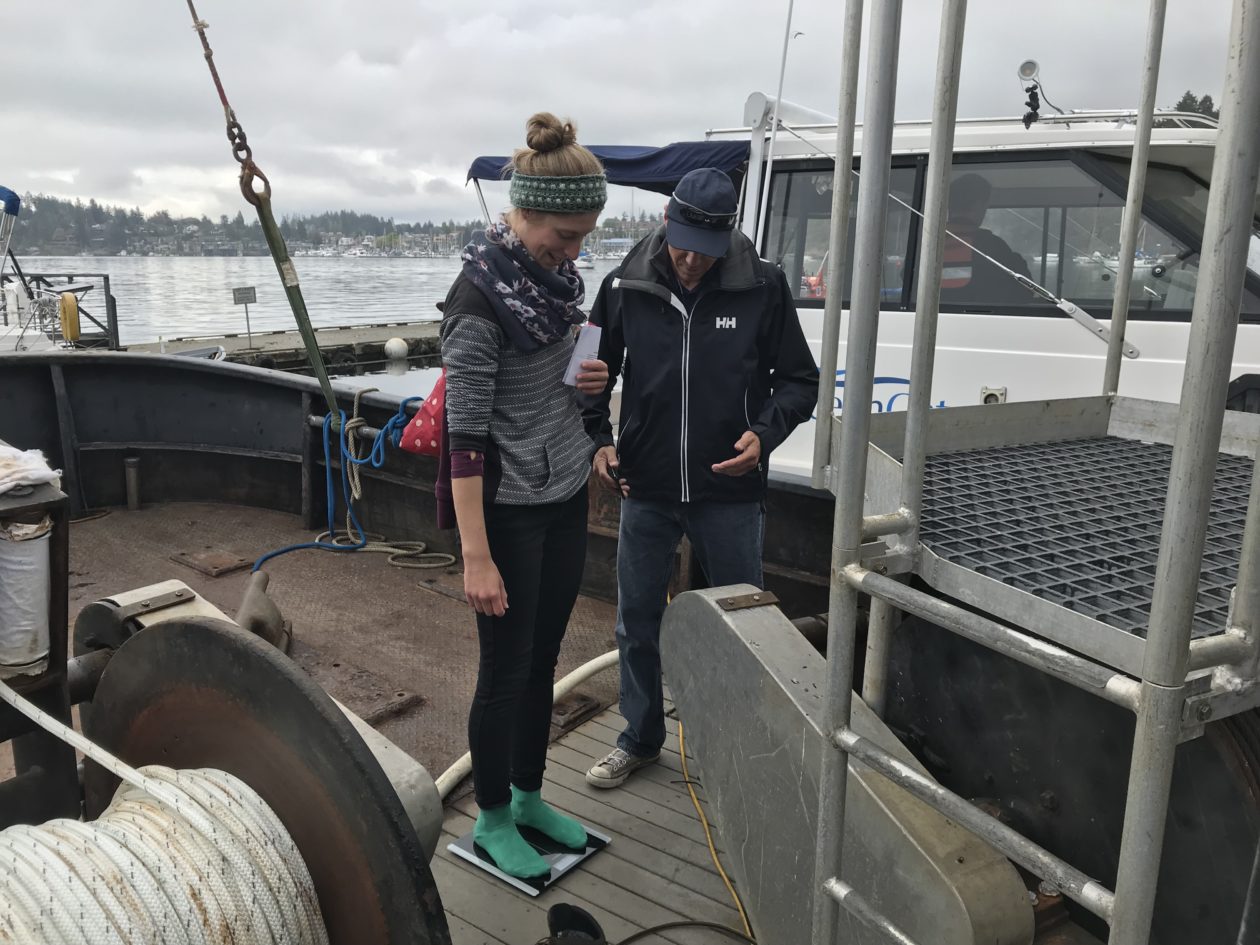 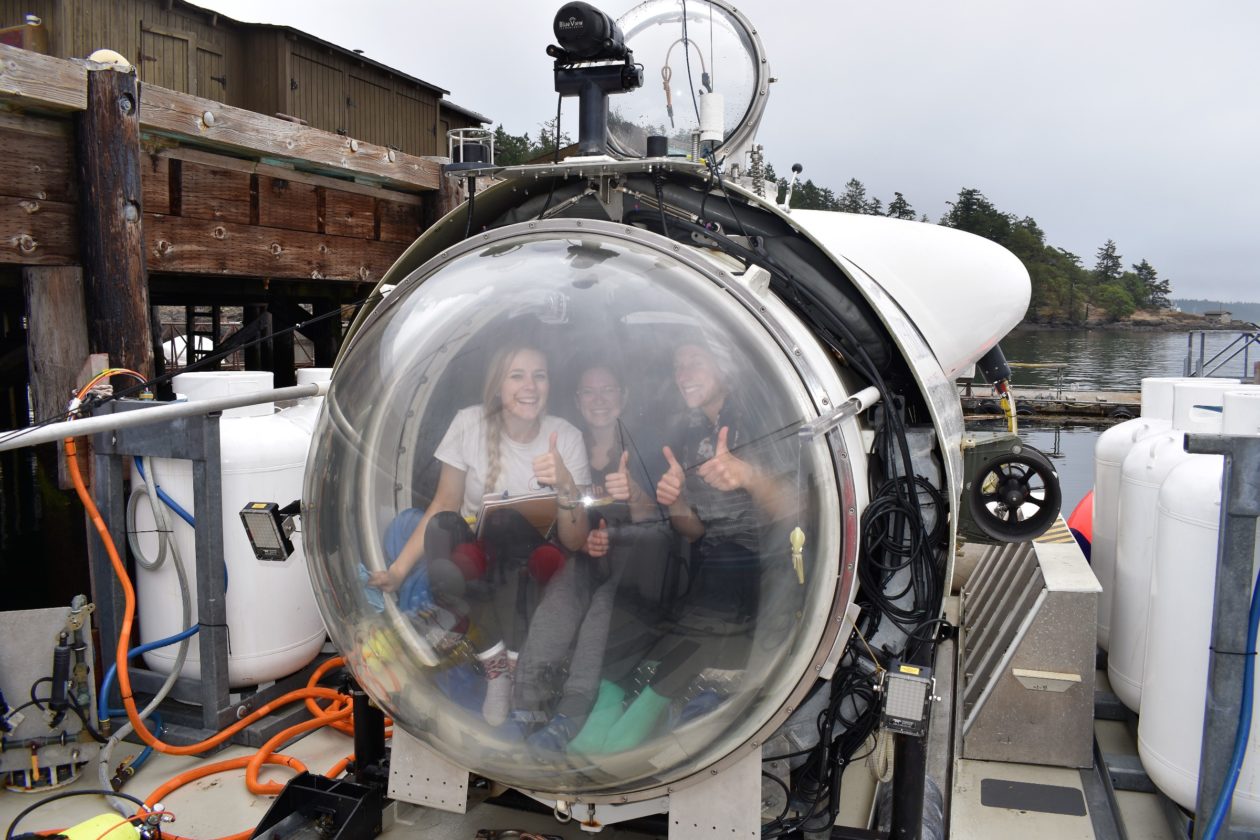 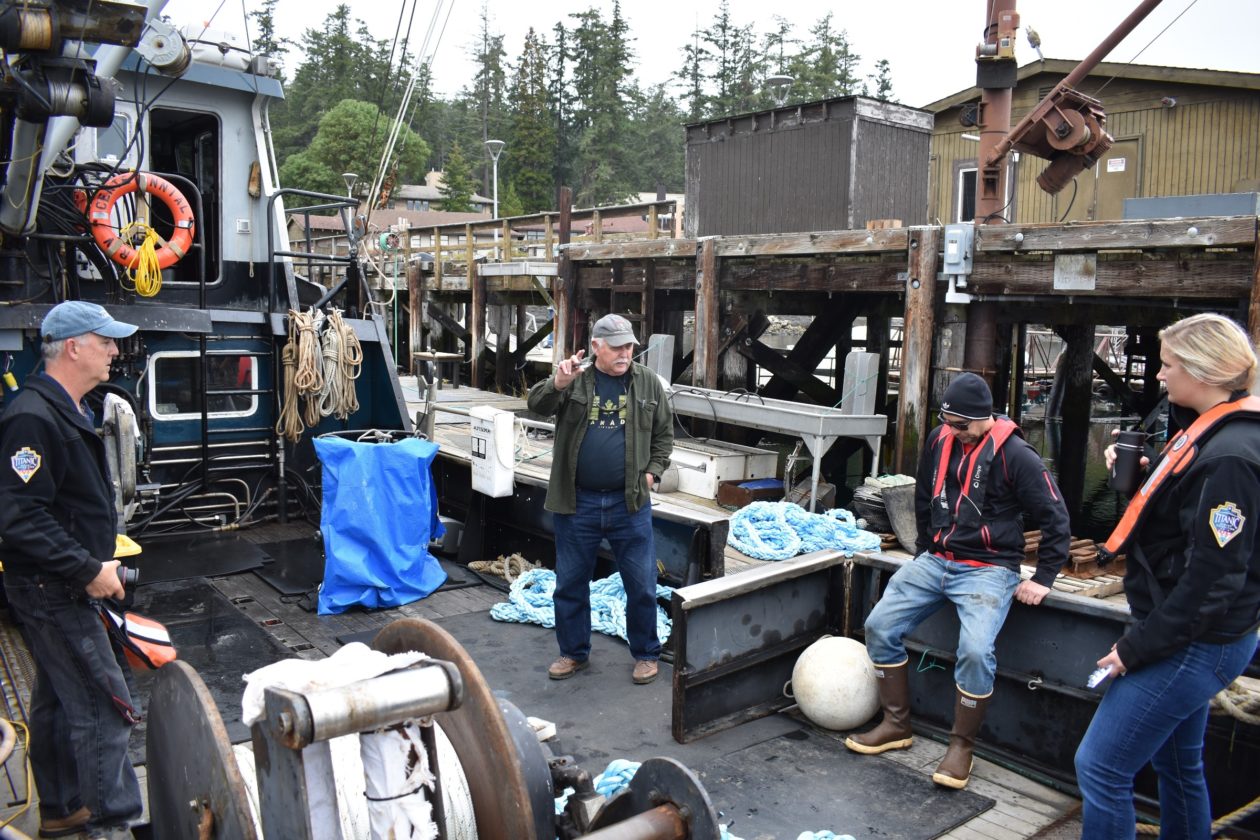 Captain Craig Melvin gives a safety briefing aboard the R/V Centennial, which will tow the sub out to the dive site. (GeekWire Photo / Alan Boyle) 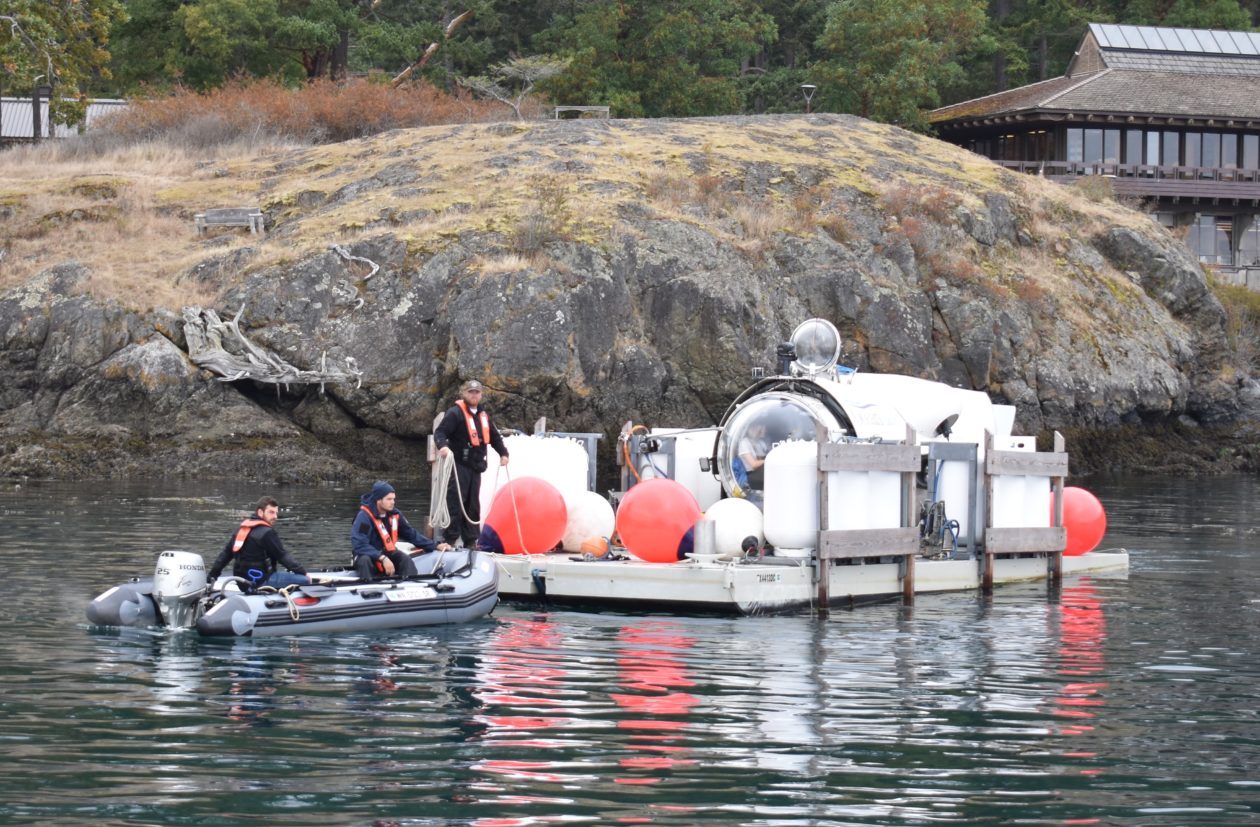 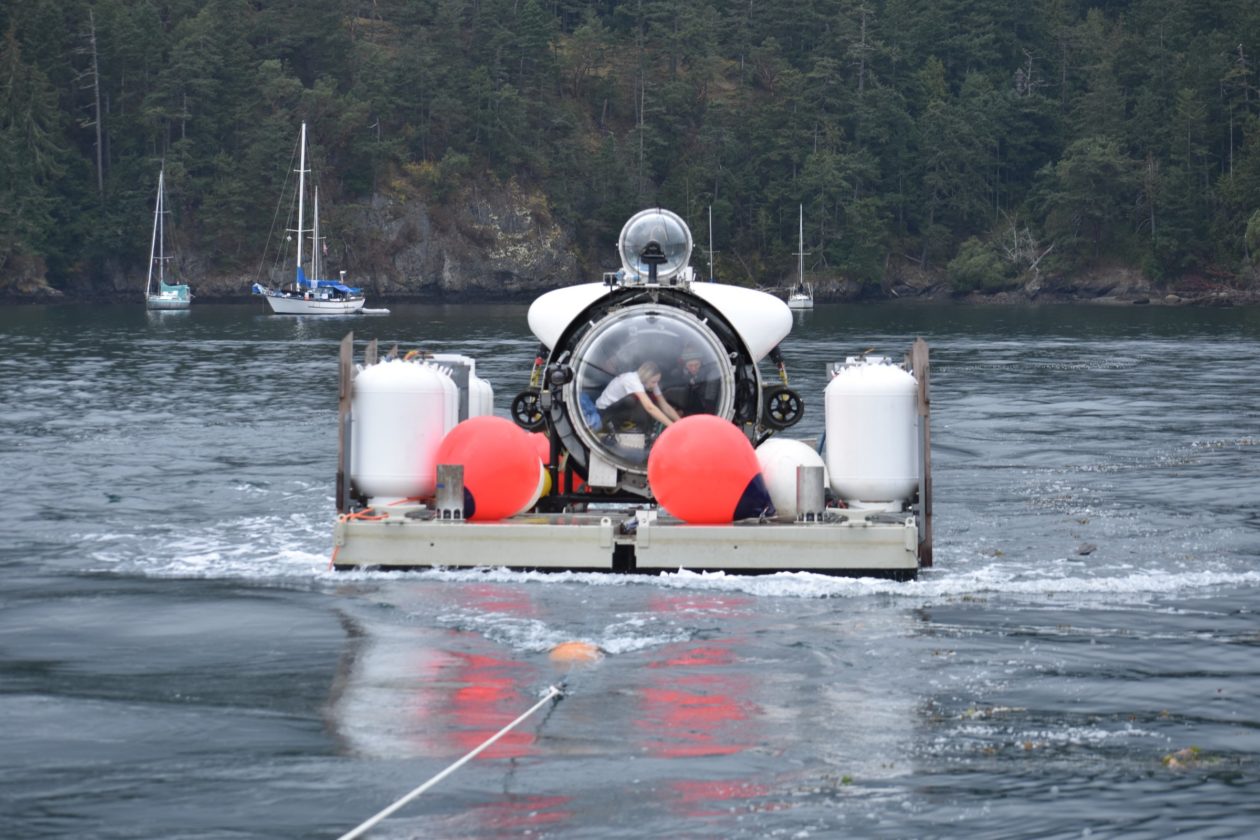 The Cyclops 1 crew remains inside the sub while it’s towed to the dive site. (GeekWire Photo / Alan Boyle) 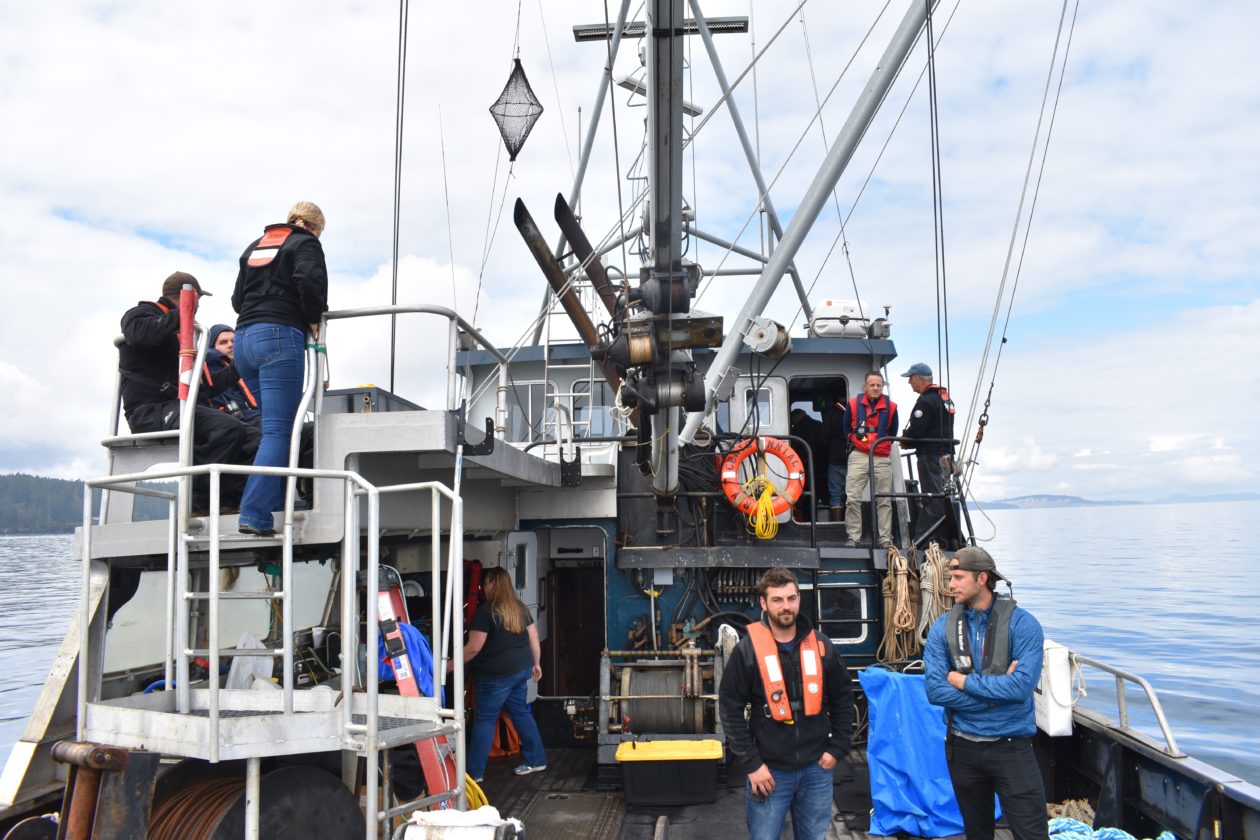 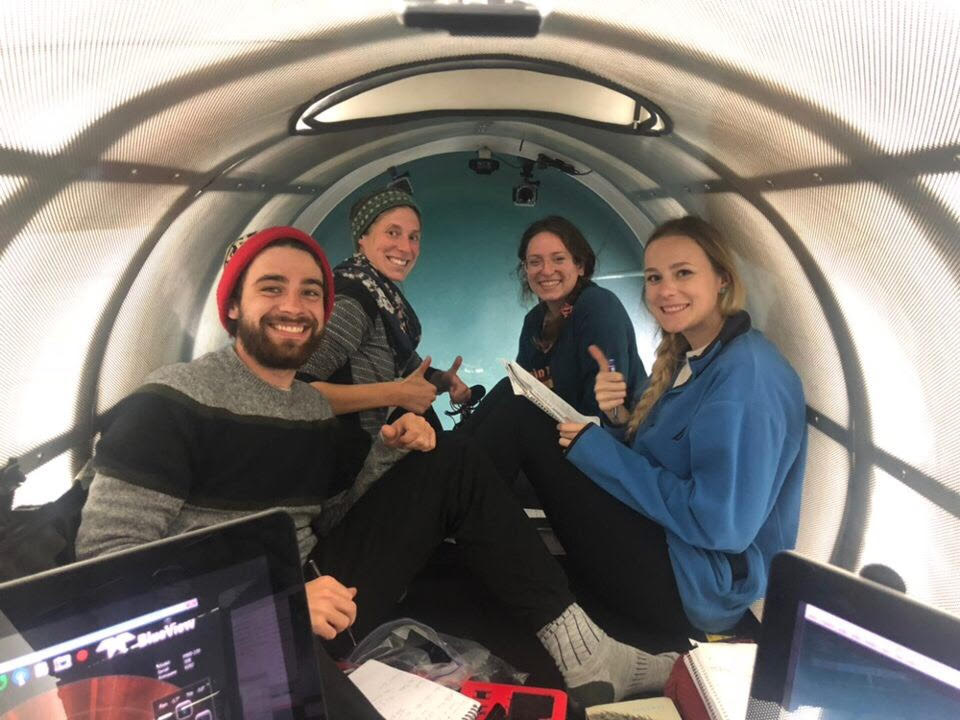 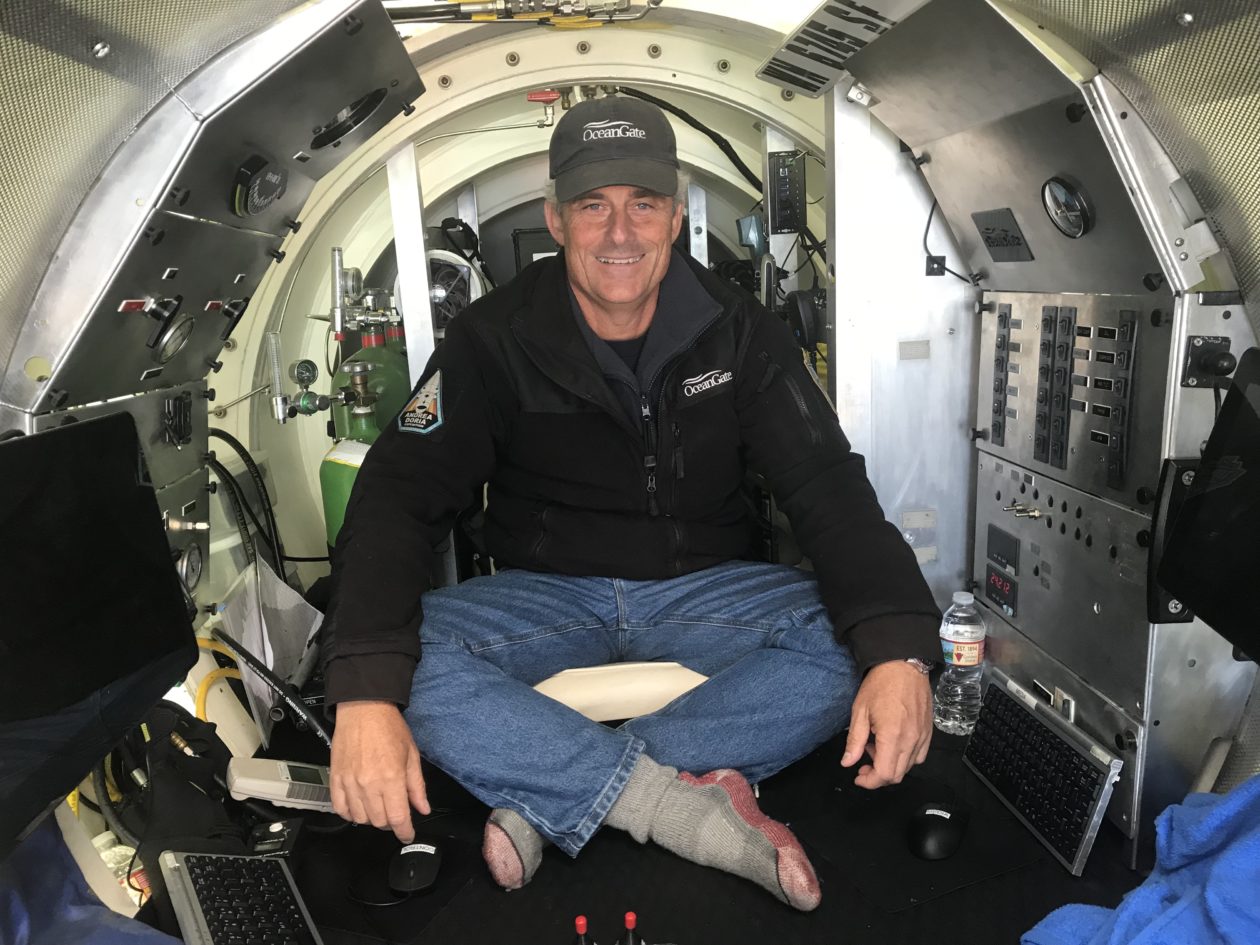 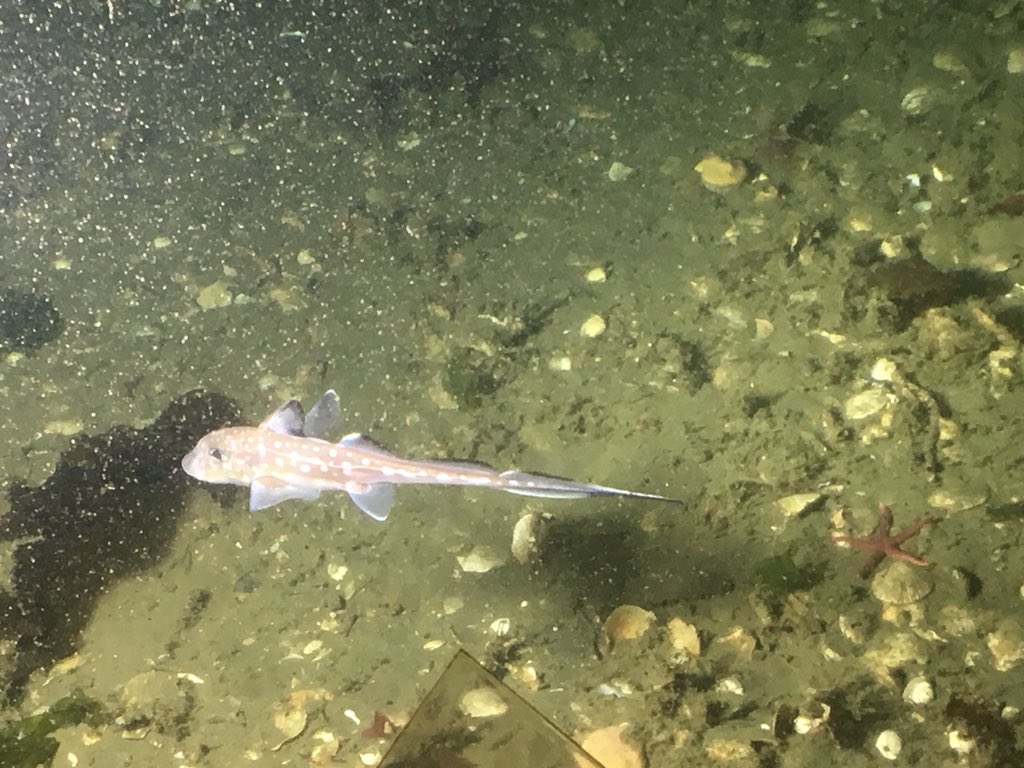 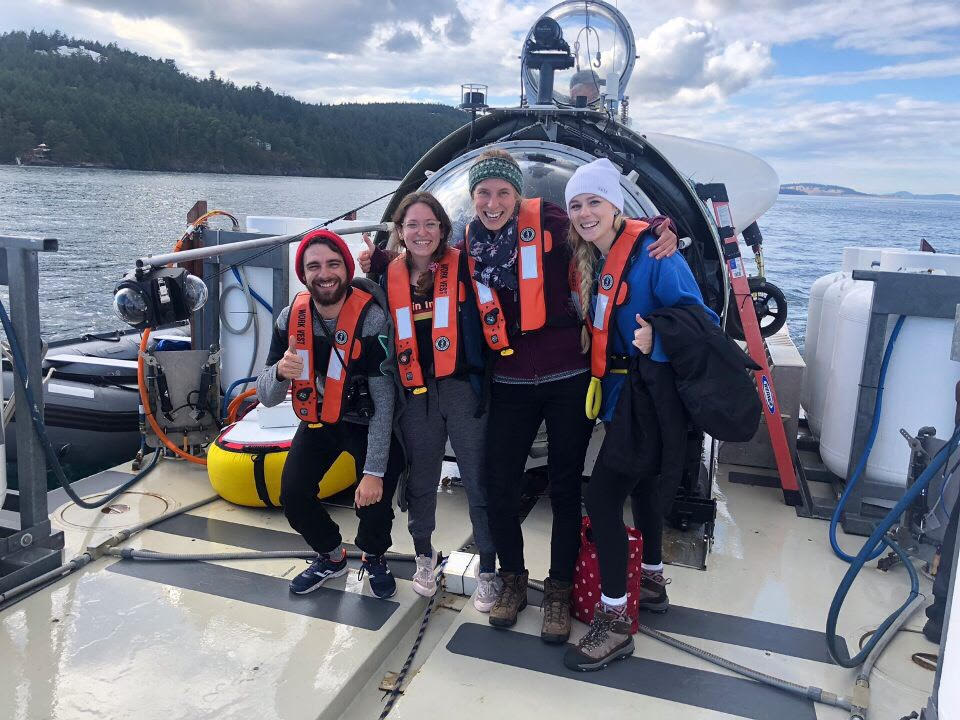 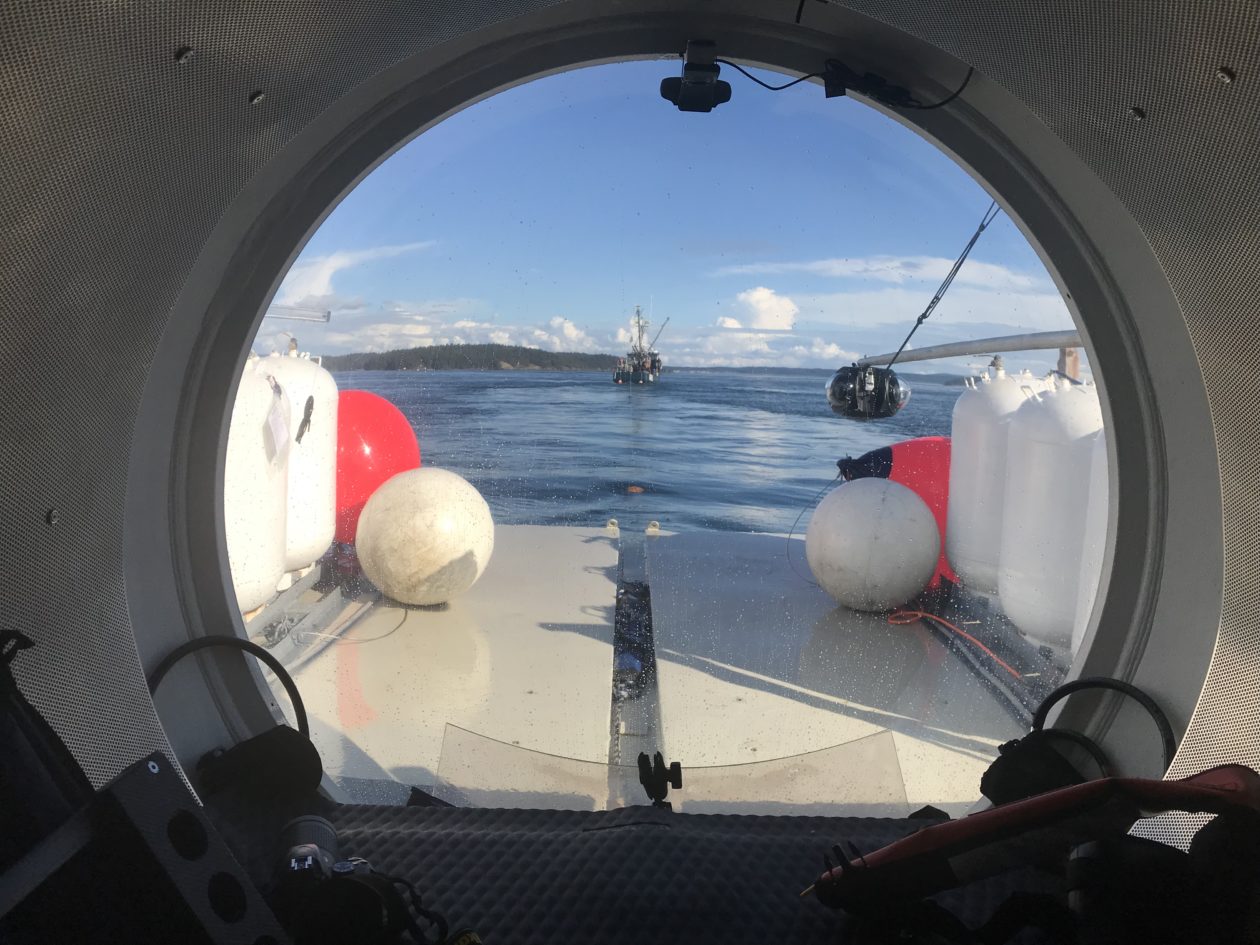 The R/V Centennial is framed in the viewing dome of the Cyclops 1 as the sub and its launch platform are towed back to port. (GeekWire Photo / Alan Boyle) 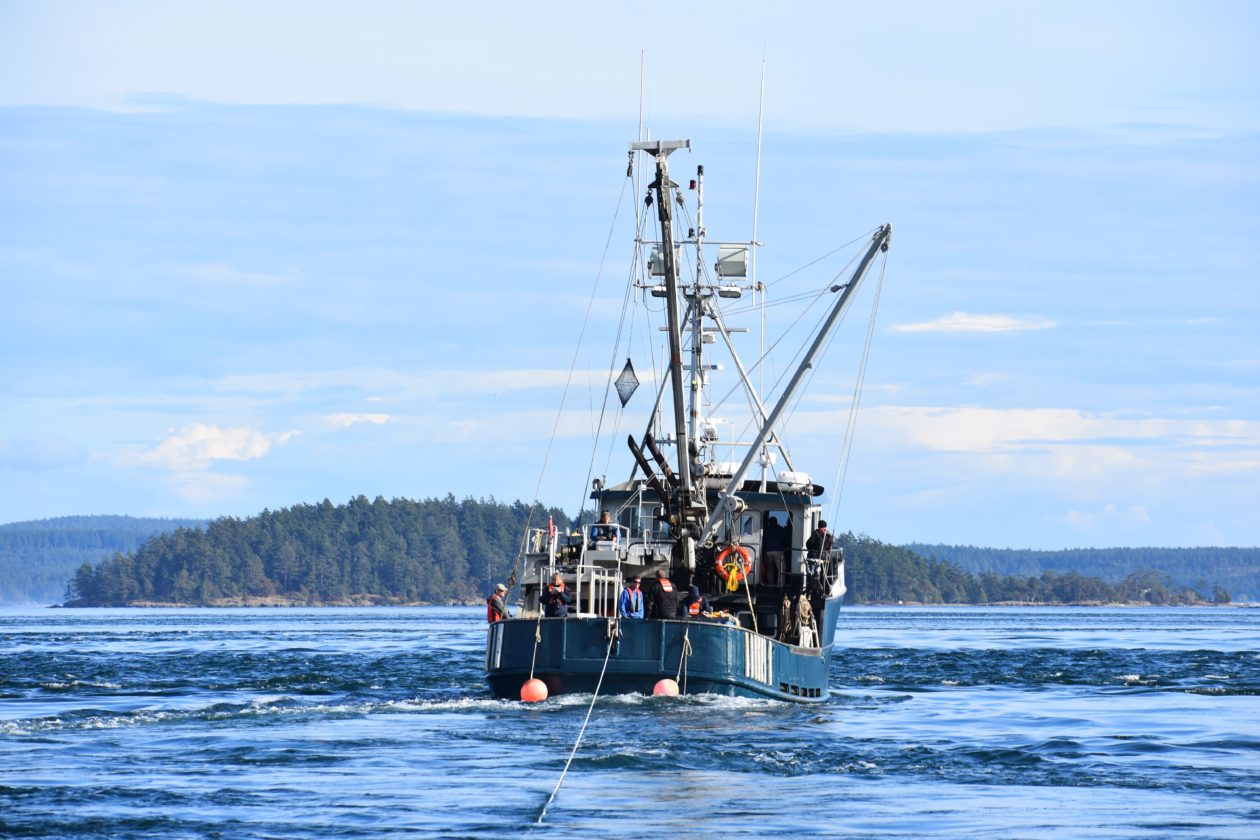 The R/V Centennial heads back to port, with a tow line extending to the Cyclops 1 sub. (GeekWire Photo / Alan Boyle) 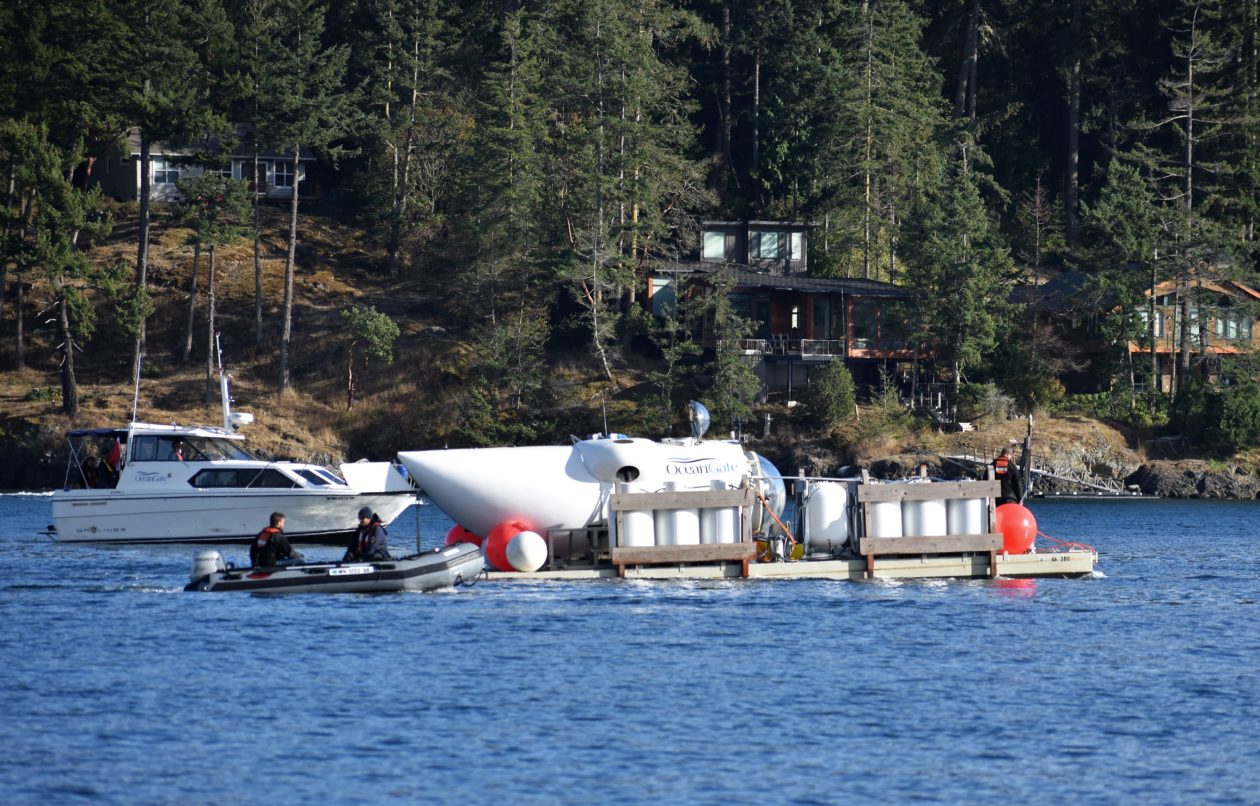 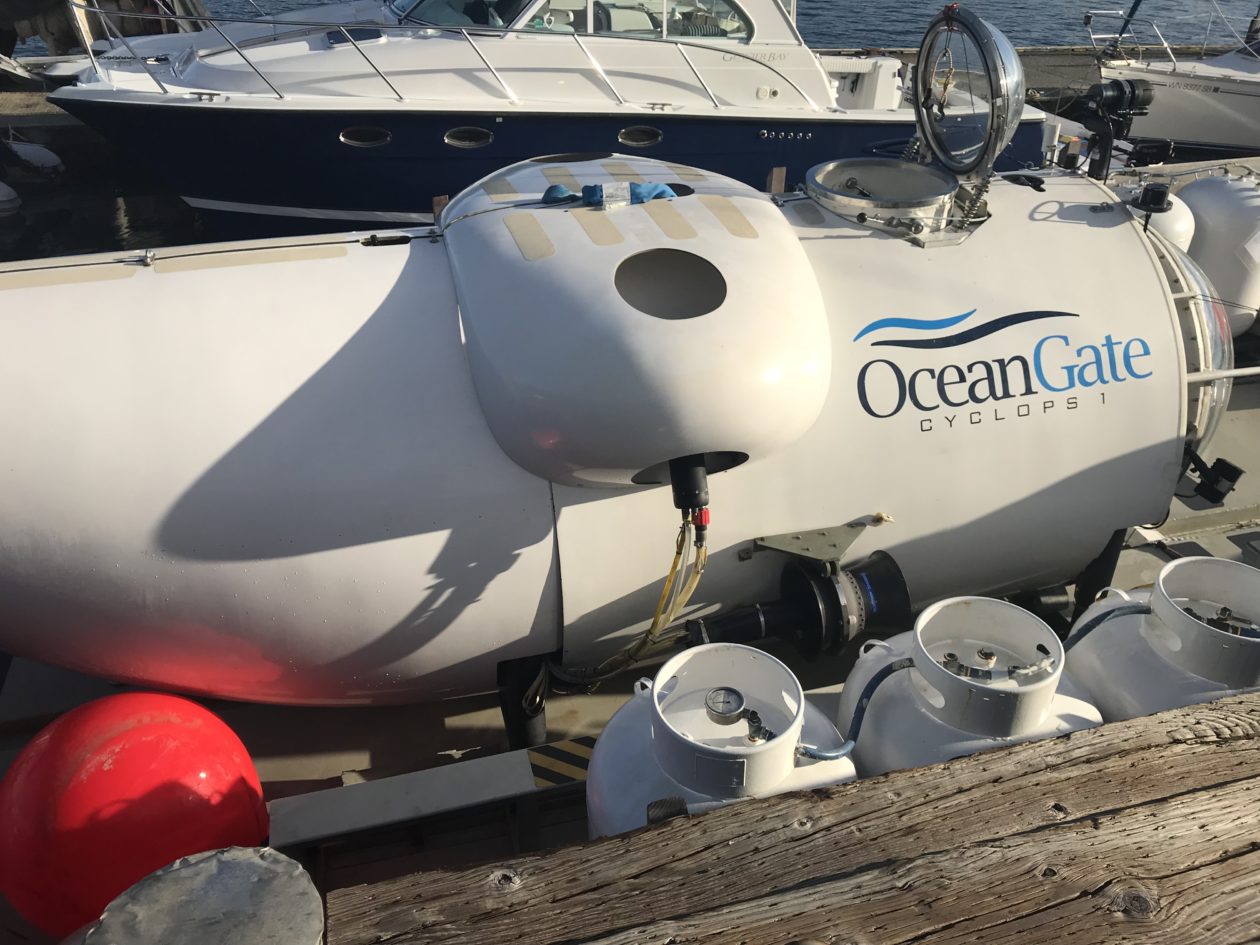 Wednesday’s daylong excursion followed an outing that went to a different area of the Salish Sea but brought back similarly satisfying scientific results. UW’s Lowe and fellow graduate student Mo Turner, along with Aaron Galloway of the Oregon Institute of Marine Biology, were granted time on Cyclops 1 to study the range of red urchins.

Red urchins play an important role in structuring seafloor communities and sometimes show up in seafood markets. Kelp forests and eelgrass are their dietary mainstays, but the forests don’t extend much deeper than about 10 meters below the surface. In deeper waters, red urchins must rely on scraps of kelp that drift down toward the bottom. The creatures are hard to find any deeper than about 100 meters (330 feet).

The waters were murky for Tuesday’s dive, and the researchers could catch sight of sea life for only a few seconds at a time. But as the submersible descended to the seafloor, the trio captured their record-setting glimpse of a red urchin — with a piece of drift kelp floating conveniently nearby.

“It was mission accomplished in six minutes,” Lowe recalled.

The team celebrated their 284-meter-deep (932-foot-deep) sighting on Twitter with the hashtags #urchinSEARCHIN and #DeepestRedUrchin.

“It may not be surprising to people who know about urchins that they’re down there, but it is satisfying to officially show that this is a record,” Galloway said.

The urchin-searchin’ team added more sightings during a follow-up dive on Thursday:

A third team of researchers — including Gary Greene and Joseph Bizzarro from California’s Moss Landing Marine Laboratories, plus Matt Baker from Friday Harbor Labs — focused on the behavior of a thin fish known as the sand lance.

The sand lance doesn’t have the typical sort of bladder that serves as a built-in flotation device. Instead, it has to rely on wave action to carry them along the seafloor. And when the fish needs to hide from predators, it drives itself into the sand like the pointed weapon it’s named after.

This week’s expedition is giving the researchers one of their best opportunities to see how the sand lance does its thing in the depth of the Salish Sea.

And when the week is over, then what? While the scientists distill their findings into research papers, Stockton Rush and the OceanGate team will go on to their next experiment in the waters of the Bahamas. That’s where OceanGate’s more advanced Titan submersible is waiting for the resumption of deep-water testing.

This spring, stormy weather in the Bahamas added some unanticipated delays to the dive schedule. OceanGate was able to conduct uncrewed tests of the carbon-composite hull’s integrity at a depth of 4,000 meters (13,000 feet) in June, but Rush had to put off his plan for a crewed descent to that level.

Making sure that Titan can be safely piloted in the Bahamas’ deep water is a crucial step in preparations for next year’s scheduled survey dives to wreck of the RMS Titanic, 4,000 meters deep in the chillier waters off the coast of Newfoundland. Because of bad weather and the damage done by lightning strikes, the first Titanic trips had to be rescheduled from this summer to next summer.

Each dive will carry researchers as well as mission specialists who will be paying more than $100,000 each to be part of the adventure. Rush said not a single customer canceled, despite the delays — which he sees as a testament to the faith they’ve put in OceanGate..

“Our initial mission specialists signed up to dive to the Titanic with a company that had never taken anyone there, on a submarine that hadn’t been built yet,” he said. “They are passionate supporters of what we’re doing to scan the wreck, and to have an experience that’s completely unique on this planet. They are on the extreme end of the early adopters.”