Shorter lines at the stadium and buying beer without a wallet — it’s now possible for Seattle sports fans who are willing to hand over a few fingerprints.

CLEAR, the New York City-based company best known for its identity verification technology at 26 airports across the U.S., is making its way into sports venues across the country. Those who sign up for a free account can enter the gates via a special “fast pass” lane and in some cities, purchase food or alcohol by simply scanning a fingerprint.

There are 14 stadiums using CLEAR. In Seattle, both CenturyLink Field and Safeco Field implemented the service this year. The Seattle Seahawks are the first NFL team to use CLEAR’s technology and GeekWire had a chance to take it for a test run before last weekend’s home game against the Los Angeles Chargers.

CLEAR, which will reach 3 million members this year, has kiosks outside the stadium where fans can sign up for an account. The company captures six total fingerprints — thumb, index, and middle finger for each hand — and your ID, along with an email address and phone number. There’s also an iris scanner, but that is only used for airport members who pay $179 per year to get expedited at security before physical screening, similar to TSA PreCheck. CLEAR users also sign a terms and conditions agreement.

The sign-up process typically takes five minutes, though I experienced some hiccups with ID verification that caused a slight delay.

Fans are still subjected to a security procedure, and it’s up to individual venues to determine how they implement Clear to enhance the overall fan experience.

At CenturyLink Field, CLEAR members get access to a fast lane — both at the entrance and at concessions stands, where your biometrics enable both payment and age verification for alcohol purchases. The State of Washington approved Clear’s platform as replacement for a traditional ID check earlier this year.

The Seahawks put CLEAR scanners at two concession stands before the season started and have since expanded it to four areas along the concourses.

“This gives us an opportunity to enhance the customer experience, but also increase the speed of service, which is the most important part for fans so they can see the excitement on the field,” said Zach Hensley, vice president of venue operations and guest experience for the Seahawks. 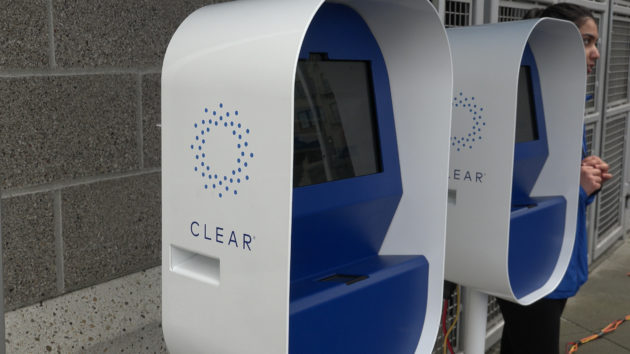 For some fans, using CLEAR at the games is a no-brainer — faster entry and a more seamless way of buying food and drinks. But privacy concerns may dissuade others.

People need to be informed and they need to understand what information is being collected and how it’s being used.

Nearby one of the CLEAR concession stands on Sunday, we ran into Rep. Suzan DelBene (D-WA), who this week was re-elected to represent Washington’s 1st congressional district. When asked about CLEAR, privacy issues were top of mind for DelBene, who recently introduced the Information Transparency and Personal Data Control Act that would establish an “opt-in” framework for companies that collect sensitive personal information.

“People need to be informed and they need to understand what information is being collected and how it’s being used,” DelBene said. “Then it’s their decision to make, whether they want to participate or not.”

CLEAR’s privacy policy, which you can read here, notes that “we also may disclose biometric data and other personal information for the purposes described in Section 2.A of this Privacy Policy to airport authorities, the U.S. Transportation Security Administration and other government agencies.”

Here’s what a CLEAR spokesperson shared in regard to questions about personal data:

“CLEAR does not, and will not sell our members’ personal data under any circumstance, and we go to great lengths to secure and protect that data. Our platform is SAFETY Act Certified as a Qualified Anti-Terrorism Technology and member biometric data is encrypted at all times.”

CLEAR, which re-launched in 2010 after CEO Caryn Seidman-Becker helped buy the original company out of bankruptcy, wants to provide more value for sports fans with its memberships. Next year it will launch a pilot program with Major League Baseball that allows members to link game tickets with their CLEAR account, allowing fans to gain entry with only their biometric info.

Other companies have tried using, or are currently implementing, biometrics for identity verification. Alaska Airlines tested the technology in 2014 but didn’t roll it out broadly. Disneyland has done it for years. Apple and Samsung have added fingerprint readers to their flagship smartphones in recent years.