There are a lot of games on the market that, as part of their narrative, present you with hard choices. You save one person’s life, and in so doing, condemn another. Maybe you show mercy and spare an enemy’s life, but due to consequences you couldn’t have predicted, condemn him to a fate worse than death. You have one valuable item, but two people want it, and whoever doesn’t get it is doomed. You know the type.

Playing “Into the Breach” feels like I’m making two or three of those decisions every turn.

“Into the Breach” is a turn-based strategy game from the two-man, Seattle-based studio Subset, which took over the universe 5 1/2 years ago with its spaceship simulator “FTL: Faster Than Light.” You play the part of the commander of a small group of mech pilots, who have traveled from a doomed timeline in an attempt to save what’s left of Earth, at some point in the distant future when the oceans have risen. Most of the remnants of humanity are clinging to one of four islands, each of which is under the near-total control of a single corporation. On top of that, each island is under near-constant attack from a race of giant insects called the Vek, and your mech brigade are the only force humanity has that stands a chance against them. 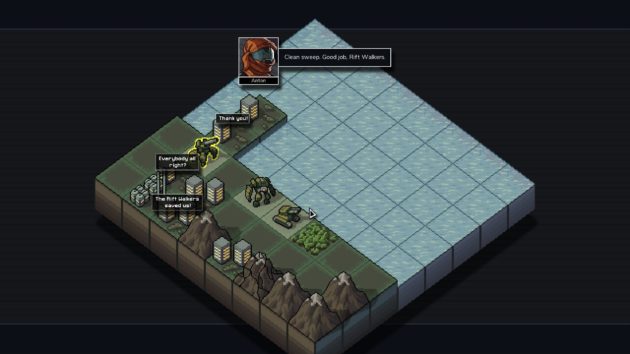 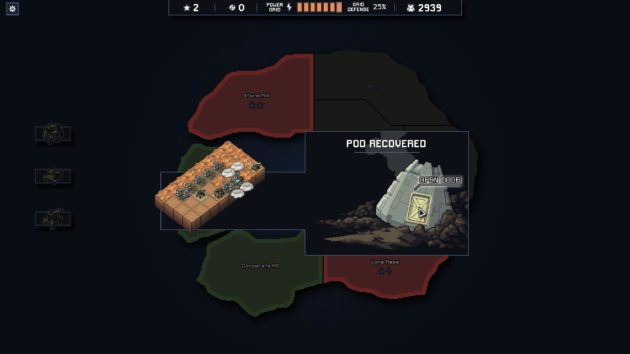 Like “FTL,” “Into the Breach” is a “roguelike”: all decisions are final, all deaths are permanent, and your only option if things go south is to either eat the losses and move on or start over entirely. Once per fight, if your decisions don’t go the way you wanted, you can reset time and start a single turn over, but that’s all you get. If your units get destroyed, the pilot dies. In future maps, an AI can take over driving their mech, but the pilot is gone for good, along with whatever unique qualities he, she, or it possessed.

More importantly, if the cities get destroyed, your game is over. Each bit of incidental collateral damage that human buildings take is represented by an electrical grid on the top of your screen. If that grid gets fully depleted, you’ve failed in your mission, the Vek has won, and all you can do is jump to another timeline and try again. You’re allowed to keep a single surviving pilot, with his or her experience points and skills intact; everything else is left behind in your previous timeline, where it will presumably be eaten by giant bugs.

The challenge, and the frustration, of “Into the Breach” comes from its juggling act. You want to keep your pilots alive and your mechs intact, but they’re intrinsically less important than preserving the local civilian infrastructure. You constantly have to make a choice: do you preserve your mechs, save as many civilians as you can, or fulfill your objectives on the map? Sometimes, but not often, you can do all three, but sometimes you just have to let something go. 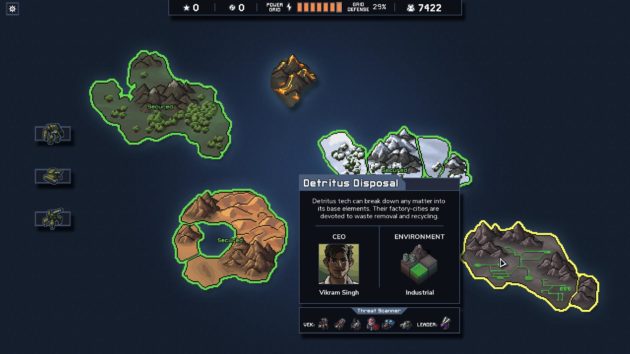 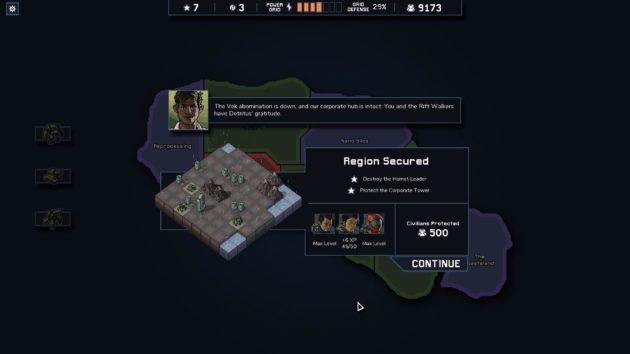 An additional complication is the importance of movement. Most of the attacks in “Into the Breach” will move their user or their target in some way. Punch a Vek with your giant robot, for example, and the Vek goes backward one hex on the map. If it collides with something, it stops, but both it and its target take a little damage. This sets up situations where you can’t actually attack an enemy, because even if you drop it in its tracks, its corpse will go flying and cause more damage than killing it would prevent. It may have to be enough for the turn for you to knock it into a part of the map where it’s not going to inflict any losses on you for now. Sometimes, on the other hand, you can set up a domino chain where a bunch of enemies manage to kill each other, which is always one of my favorite things in a game.

I got some advice from Twitter to start on “easy” mode, and that was about right. Even on easy, there’s a big difficulty spike between the second and third available islands, as you go from relatively sedate desert maps to a bunch of runaway robot factories. Jump up to “normal,” and you start running into a lot of new monster types which are progressively more difficult to deal with. A lot of them also start inflicting much larger amounts of base damage, which feels like artificial difficulty, especially when one of your mechs gets dropped in its tracks by a type of Vek that, one map ago, would barely have scratched it.

“Into the Breach” does a lot with very little. The graphics are all simple sprites that are nonetheless evocative and easy to read, and the music is one of the game’s high points. Theoretically, there are only four islands to fight through, with a final encounter you can hit up at any time, but each island’s maps are procedurally generated on the fly, each new level of difficulty that I’ve seen also adds new mechanics and monsters, and when you get achievements, you earn coins that can be spent on dramatically different new squads of mechs to play with. You get a lot of value here, especially for a $15 game.

However, it’s down to a question of your own threshold for frustration. One of the most useless things you can say in a review is some permutation of “if this is the kind of thing you like, then you’ll like this,” but “Into the Breach” is made for a specific sort of player. You have to enjoy getting kicked in the teeth, and incurring big penalties for failure; you have to be willing and able to learn from failure and move on regardless, or else to start over again and again. I can’t imagine playing “Into the Breach” at the end of a long day to chill out, but I can see it taking over the right sort of player’s life for a few weeks. If that’s you — if you couldn’t get enough of “FTL,” if you really liked the earlier “Fire Emblem” games, if you’d really like “Nethack” and its clones a lot more if they had giant robots — then “Into the Breach” is exactly your sort of thing.

Editor’s Note: This game was played using a code provided by Subset Games.