Investment dollars are flowing into real estate technology startups at record pace and a good chunk of them happen to be based in the Pacific Northwest.

Seattle and Portland are home to several fast-growing young real estate companies as the region has turned into a hotbed of sorts for startups aiming to innovate how consumers buy, sell, and rent homes.

Other companies, including Vacasa (No. 2), Porch (No. 10), Stay Alfred (No. 49), and Pro.com (No. 95) are building technology tools in related industries such as vacation home rentals or home improvement.

Why is the Northwest such a nexus for real estate technology?

It doesn’t hurt that real estate giants Zillow Group and Redfin are also based in Seattle, neither of which are included on the GeekWire 200 list since both are publicly traded. Zillow Group, which has grown aggressively through acquisitions, boasts a market value of $5.5 billion, while Redfin — after a recent stock hit — is valued at $1.5 billion. Those companies help anchor a thriving real estate tech market in the Northwest, which also includes startups such as FlyHomes, CityBldr, Faira, Knock, Blokable, Loftium, Househappy and IOTAS.

Innovative traditional real estate companies such as Windermere and John L. Scott were founded in the Seattle area, while Zillow and Redfin have grown into industry giants, creating a center of real estate technology talent and expertise. Seattle has also been one of the nation’s hottest real estate markets for the past few years, even though signals indicate a cooling market.

Investors are pouring massive amounts of venture capital into these companies as the industry goes through a transformation.

“There’s now a broad consensus that real estate is going to change in the United States,” Redfin CEO Glenn Kelman said at the GeekWire Summit earlier this month.

Of course, those sentiments have been shared before, and companies such as Redfin and Zillow were trailblazers in setting forth the first wave of change in real estate, which largely revolved around map-based search, automated home valuation tools and technologies to easily gather information on residential real estate.

The latest surge in venture capital is headed a new direction, with new entrants trying to upend how people buy and sell homes. Venture capital investments in the real estate arena are expected to top $3 billion this year, dwarfing the totals from prior years.

It’s notable that a big chunk of this capital is flowing to companies such as Compass, the New York-based real estate company that raised a whopping $450 million in venture funding last year; San Francisco-based Opendoor, which brought in $325 million in June and employs more than 700 people; and Charlotte, N.C.-based Ribbon, which is backed by the likes of Greylock (original Redfin investor) and Bain Capital. All of them are trying to upend the real estate home buying and selling process, through capital-intensive business models.

That said, New York and the Bay Area also have a number of startups that are in the process of disrupting and improving the real estate industry, and there’s a risk that Seattle may lose its place as a center for real estate technology.

Will the nexus of real estate tech shift away from Seattle? Does the new breed of technology real estate companies hit the market at an inopportune time, just as the housing market cools? Can Redfin and Zillow hold onto their leads, or will any of the Seattle area upstarts make headway in an increasingly tough market? We will be watching as these trends develop.

“That said, New York and the Bay Area also have a number of startups that are in the process of disrupting and improving the real estate industry, and there’s a risk that Seattle may lose its place as a center for real estate technology,” Lane added. “The burden is on Zillow, Redfin, other up-and-coming real estate startups in the Pacific Northwest, and our team at FlyHomes, to continue to improve the experience on behalf of clients so that 10 years from now, Seattle isn’t known just for it’s real estate search apps, but instead it is HQ1 for real estate innovation.”

The top ten companies on the GeekWire 200 remained unchanged this month, with the exception of pet-sitting marketplace Rover, which jumped to the No. 5 spot. 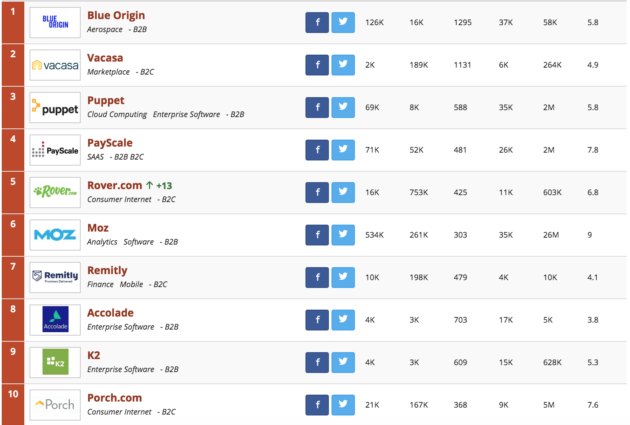 Mobile car repair service Wrench was this month’s biggest mover, jumping 57 spots to No. 128. The Seattle startup raised $12 million earlier this month and acquired a rival company, Otobots, in September.

Nearly a dozen startups debuted or made their return to the list in October. They are: Eventbase, EndoGastric Solutions, Sensoria, Modus Box, WyzeCam, Vincero Collective, Bright.md, Plugable Technologies, HaptX, Bill4Time, and Dolly.

The GeekWire 200 — sponsored by our partners at EY — is derived from our broader list of more than 1,200 Pacific Northwest tech startups. The list is designed to provide a better understanding of the startup landscape in the Northwest. The rankings are generated from publicly available data, including social media followings, approximate employee counts (via LinkedIn) and inbound web links. As we mentioned, the most important factor is employee growth, since our goal is to track those companies who may be emerging as the next Microsoft, Amazon or Expedia.