Perhaps the most notable update to SPIN is the ability to edit VR content while wearing an Oculus Rift headset. It lets users perform natural gestures and actions with their hands to move media, add editing effects, and create linear stories.

Pixvana says this is the industry’s first set of tools that allow for editing in a VR native environment.

“With this release, we’ve completely reimagined the way people create interactive stories, and made it possible for them to unlock the real potential of VR media,” Pixvana CEO Forest Key said in a statement. “Both expert and novice creators can now make VR video experiences and engage with audiences in more powerful ways – enlivening events, presentations, classrooms, tours and more.” 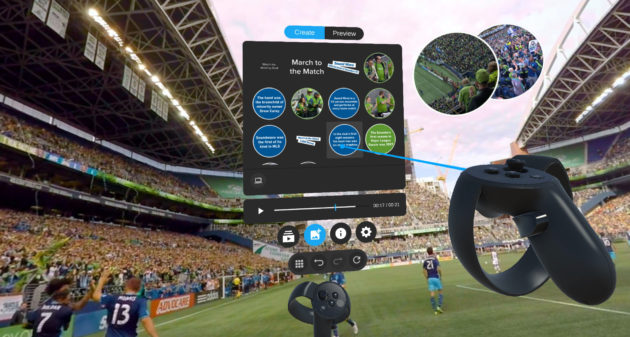 Pixvana also added improved stitching technology to SPIN, which can be used to stream and share content to other headsets.

It still remains to be seen if and when VR and AR technology will go mainstream. Pixvana is one of several Seattle-area startups that have laid the groundwork and are ready to capitalize on the tech if it starts to reach critical mass.

Many entrepreneurs, including Pixvana’s Key, believe VR’s “iPhone moment” is getting closer and closer. Key said the market is still in its early days, and that the past two years feels like it did in the mobile phone era just before Apple launched its first iPhone. He said the “iPhone-level products” will ship in 2018 and 2019.

“Companies that have good teams, some product-market fit, or tech in areas that will likely be able to scale with the market are continuing to raise money and are heads down developing tech,” he noted in June.

Early use cases of VR/AR include location-based entertainment and training. Walmart announced Monday that it plans to use 17,000 Oculus Go headsets to train employees on new tech, compliance, and soft skills.

A new report published last week by The Venture Reality Fund found that venture capital investments in VR is still growing, but not at the pace of past years.