Hannah Lidman arrives before 7 a.m. in Seattle’s Pioneer Square neighborhood. She’s an entrepreneur on a mission: Find a technical co-founder for her new business, DayHeart, an app that connects families to childcare resources.

And she knows just where to go. Lidman makes her way to a nondescript building on James Street. Hanging in the window is a small sign: “F Bomb Here.”

It’s the January meeting of the F Bomb Breakfast Club, a bombastic group of female entrepreneurs founded by Megan McNally at the beginning of 2017. Its first meeting drew about 20 women, but the club has grown astronomically: On its one-year anniversary Friday, it counted more than 1,600 members.

Now its pre-dawn monthly meetings are often packed to their 120-person capacity and hundreds more follow along through Facebook and Slack. And yes, the members drop the occasional F-Bomb — sometimes a lot of them.

The initial goal of the group was a place for female entrepreneurs “to cuss and cavort and support each other,” McNally told GeekWire in a previous interview. “I think that peer support piece is absolutely incredible. To hear each others’ ideas, to be validated. To have other women in the circle say ‘Hey, I faced that same challenge, here’s a couple of the ways that I got over it.’ ”

Some of those challenges are very distinct — fundraising for a new company, for example. As many of the women here know, only a tiny fraction of venture capital funding goes to women-led startups.

Some challenges are the personal side of entrepreneurship. Managing expectations and difficult work environments, finding mentors, balancing family life and even dealing with anxiety or depression.

The group experiments with different formats every month, often doing giant group exercises and hosting talks from members. It never brings in outside speakers, instead relying on the expertise of its existing members.

In a national context, the group’s first year coincided with a groundswell of awareness and attention for the challenges faced by women in technology and business. That makes it all the more notable that the F Bomb Breakfast Club has become a powerhouse of networking. Several startups have been formed through the early-morning connections between members, and the women are constantly finding ways to work together and support each other.

Lidman stood before Friday’s crowd with her request: A co-founder for her childcare app with a technical background.

Behind her, Filiz Topatan sits up in her chair and throws her hand in the air.

Lidman concludes, “and I just can’t find anyone!” 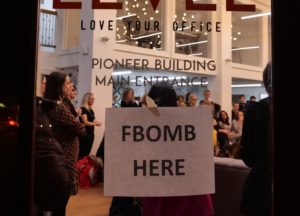 The room erupts with laughter. Lidman turns around as other members of the group usher Topatan forward. She takes the mic and explains that she’s an entrepreneur with a technical background working on an app, looking for a business-savvy co-founder. Her app connects parents with kid-friendly activities.

This is the fiber that holds the F Bomb community together: Helping out and inspiring other entrepreneurs, with unrestrained enthusiasm.

The club also embraces an unwritten recognition that few entrepreneurial circles do: They’re not invincible.

They may be superstar entrepreneurs, but they’re also people with messy lives. People who swear. People with families and fears. And, most of the time, people who have not had enough coffee yet. But, they’re in it together.

The F Bomb Breakfast Club meets the first Friday of each month at the Level Offices in Pioneer Square. Connect with them on their Facebook page or through Slack.