Some were pushed toward non-technical careers despite their technical skills. Others reported unwanted touching or kissing. Many saw less qualified men promoted over them. One witnessed male coworkers rating female job applicants based on their looks.

These are some of the incidents women working in the Seattle tech community reported anonymously in a new survey. The study was conducted by a group seeking to reduce institutional sexual harassment in the workplace by providing information and resources targeted at men. Of the 204 respondents identifying as cis women, trans, or gender non-conforming, 81 percent said they experienced discrimination or harassment at work but only 36 percent reported the incidents to their employers. Of those who did report the behavior, just 27 percent felt “meaningful action was taken to resolve the situation.” 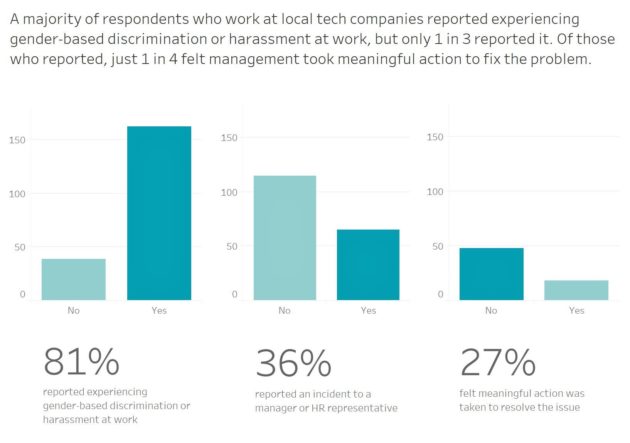 Respondents work for a range of company sizes, from startups under 50 employees to big tech companies with more than 5,000 employees, suggesting the issue is pervasive throughout the tech industry in Seattle.

The goal of the report is to offer actionable ways men can prevent and reduce sexual misconduct at work.

One respondent said, “When men call out other men on their behavior I’ve felt much more comfortable in that environment.”

“I find the most effective thing you can do to be an ally to a woman is to not just try to treat her the same as you would treat a man, but to treat her in a way that acknowledges her perspective and actively makes space for her to exist,” said another. “We do not want to play the same machismo games that males play among their male groups, don’t force me to talk over you to be heard.”

The group behind the survey doesn’t have an official name but it is supported by the Tech Workers Coalition and Women of Color Speak Out. They created the study to support an upcoming event Jan. 24, geared toward men who work in the Seattle tech industry.

Women are asking to be believed, to be listened to, to not get talked over, to be included in meetings, to get credit for their ideas, and to be recognized for their work.

“Women are asking to be believed, to be listened to, to not get talked over, to be included in meetings, to get credit for their ideas, and to be recognized for their work,” said Austin Valeske, a software engineer for Socrata and founding member of the group putting on the event. “The biggest thing I want people to take away from this data is that many of the things women are asking for are things we already do for men without thinking about it.”

The study was inspired by the tidal wave of sexual harassment, assault, and misconduct stories that have come out in the wake of The New York Times exposé on movie mogul Harvey Weinstein. Valeske and the six other members of the group wanted to show that sexual misconduct is not a problem limited to Hollywood, Washington, D.C., or Silicon Valley. They want to form a coalition of workers because “HR doesn’t work for you,” said Sol Villarreal, a founding member of the group.

“Their fundamental loyalty is to the company,” he said. “Workers need to be there for each other.”

The group was initially started by men who wanted to address these concerns after a Women of Color Speak Out representative proposed the idea. Now it is about 50-50 men and women. Caty Caldwell joined because she was concerned about the event’s male-dominated organizing committee, despite their best intentions. As a program manager at Microsoft, she felt she could offer a crucial perspective.

“I hope that this panel sparks a #MeTooSeaTech movement where all tech workers are able to speak up about their experiences with sexual harassment and racial, sexual, age, and gender-based inequities,” she said in an email. “I hope this panel also becomes a catalyst for many tech workers to realize their collective power, organize and fight for better workplaces.”

Visit this link for additional resources on #MeToo in Seattle.