HPS looked at 11 metrics in four categories — transportation; education; business, lifestyle, and culture; connectivity — for 19 of the 20 cities on Amazon’s short list. HPS did not include Toronto in its analysis due to a lack of uniform data between the U.S. and Canada.

Washington, D.C., earned the top spot on HPS’s report because of its mass transit system, educated workforce, above average livability and diversity, and network connectivity.

Boston came in second, buoyed by its universities and educated workforce. HPS picked North Virginia third based on the same metrics. 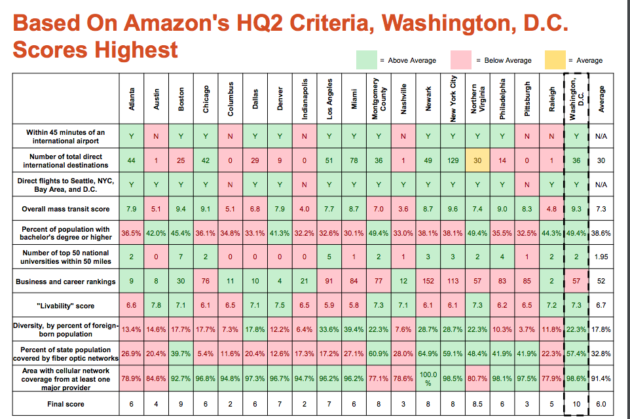 Analysts have been trying to predict where Amazon will locate its $5 billion second headquarters and the 50,000 jobs it will support ever since the company announced the project last fall. Amazon stoked the prediction fire last month, announcing that the competition had narrowed to 20 cities.

D.C. immediately became a favorite at that time, as the only metro region with three cities on the list. The district itself, Northern Virginia, and Montgomery County all made the cut. Plus Amazon CEO Jeff Bezos owns The Washington Post, and a $23 million home in D.C., another sign of the tech mogul planting roots in the nation’s capital.

But Amazon is unpredictable and loves subverting expectations. For that reason, even the most data-driven HQ2 analysis must be taken with a grain of salt.