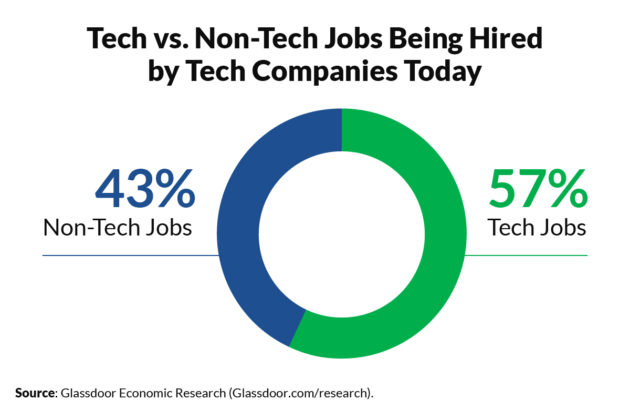 Typical tech company jobs that come to mind may include software engineer or data scientist. But nearly half of the openings at tech companies are actually for non-tech positions, according to a new study.

Jobs review site Glassdoor analyzed job postings from U.S. tech companies, separating open positions that required knowledge of code, software, or data from those that do not. It looked at companies with at least 100 job postings on Glassdoor, which was recently acquired for $1.2 billion.

The study found 57 percent of the roles qualified as “tech,” with the remaining 43 percent for non-tech jobs — positions such as account executive, project manager, and sales representative.

Different companies vary with their tech vs. non-tech openings. Amazon, for example, had 72 percent of its postings for tech-related jobs. “Despite having a large network of warehouse and logistics operations, tech giant Amazon is still mostly a tech employer,” the report noted. HR software giant Workday, meanwhile, was the opposite. 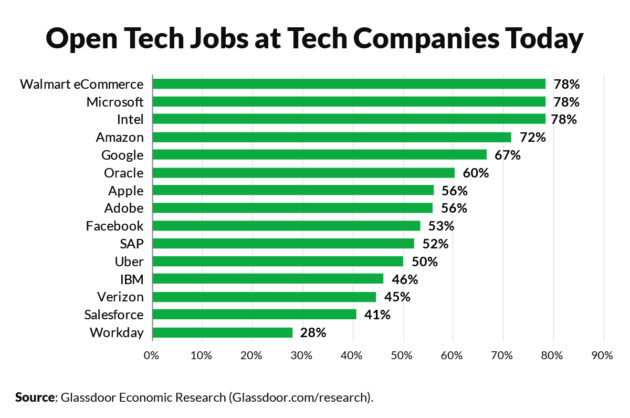 “While some legal and marketing management positions in our sample had high salaries, there are significantly fewer high paying non-tech roles in tech,” the report noted. “Instead, many of today’s highest paying and most widely available jobs in tech remain roles like software engineer, developer and technical program manager roles.”

Technical workers may earn larger salaries on average, but employees with other backgrounds are certainly still valuable — and necessary — for company growth.

“Throughout the major U.S. tech hubs, whether Silicon Valley or Seattle, Boston or Austin, Tex., software companies are discovering that liberal arts thinking makes them stronger,” wrote Forbes contributor George Anders in 2015. “…The more that audacious coders dream of changing the world, the more they need to fill their companies with social alchemists who can connect with customers–and make progress seem pleasant.”