Apple, Alphabet, and Amazon get most of the attention when it comes to predicting which tech giant will be the first $1 trillion company. But don’t forget about Microsoft.

In a new report to investors, Morgan Stanley analysts predicted that the Seattle-area company will reach $1 trillion in market value within a year.

The firm put a 12-month price target of $130 on Microsoft’s stock, up from $94 per share today. Shares of Microsoft rose more than 7 percent on Monday. The company is currently valued at $722 billion. Apple is valued at $876 billion; Amazon at $753 billion; and Alphabet at $731 billion.

Analysts pointed to “strong positioning for ramping public cloud adoption, large distribution channels and installed customer base, and improving margins” in regard to its $1 trillion prediction. It noted that Microsoft is “well positioned to benefit from strong cloud spend”: 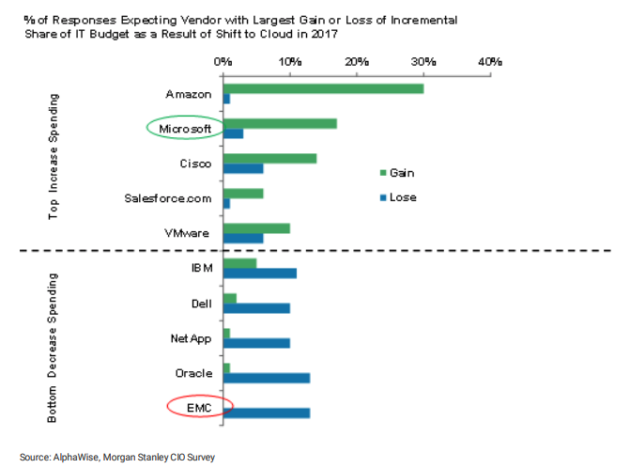 A Public Cloud solution spanning from core Infrastructure Services (e.g. compute, storage), to compelling Platform-as-aService capabilities (e.g. data, identity, analytics, machine learning), and up the stack to the application layer (e.g. productivity apps, front office apps, core financials) differentiates the Microsoft Public Cloud offering from cloud giants Amazon and Google. However, it is the combination of these Public Cloud assets with pre-existing enterprise assets, including; a large existing customer base, expansive direct and indirect distribution channel, over 6+ million .Net developers and a suite of strong on-premise technology that likely drives continuing share gains over the next three years.

In December, analysts from Evercore ISI also predicted that Microsoft would reach a $1 trillion market cap by 2020 or sooner.