Jeff Bezos’ donation of $2 billion to his newly announced charitable fund clearly isn’t chump change. But in the world of ultra-rich tech philanthropists, it’s roughly on par — or even short of — other do-gooding efforts.

On Thursday, the founder and CEO of Amazon announced the creation of the Bezos Day One Fund, an initiative to create a network of free Montessori-based, preschools in under-resourced neighborhoods and to support groups benefiting homeless families. Bezos, who is 54 and worth $160 billion, pledged $2 billion to get the effort rolling. The gift represents a little more than 1 percent of his fortune.

It’s by far Bezos’ largest charitable donation to date, but less bold than what has been pledged by other tech titans.

Take the Bill & Melinda Gates Foundation. The Seattle-based initiative led by the Microsoft co-founder and his wife launched with $20 billion in 2000 when Gates was 45 years old. (The foundation was formed from the merger of two smaller, pre-existing efforts: the William H. Gates Foundation and the Gates Learning Foundation.) The organization, which is focused on global health and education, has distributed $46 billion to grant recipients through last year. The foundation’s endowment totals $50.7 billion, with significant contributions to it made by Warren Buffett.

In December 2015, Facebook’s Mark Zuckerberg, then 31 years old, announced the creation of the Chan Zuckerberg Initiative — an L.L.C. owned by himself and his wife, Priscilla Chan, that issues grants, engages in advocacy and policy work, supports engineering and makes investments. The couple pledged that they would contribute $1 billion a year to the cause for three years, and that Zuckerberg would endow the effort with 99 percent of his Facebook shares, which were worth $45 billion at the time. 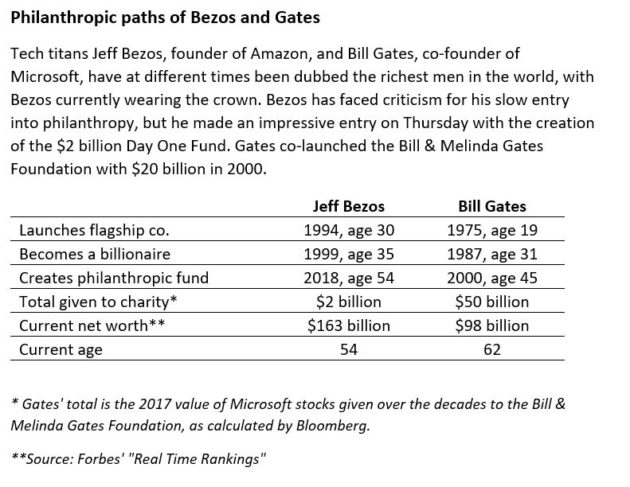 Bezos hasn’t said how much he’ll be contributing to the fund in coming years. And he also hasn’t signed The Giving Pledge, an initiative created by the Gateses and Buffet that encourages billionaires to give away the majority of their wealth to philanthropy. Zuckerberg, fellow Microsoft co-founder Paul Allen, Airbnb’s Brian Chesky, early Amazon investors Nick and Leslie Hanauer, and other tech CEOs have all signed on.

But Bezos did receive kudos today for taking an important step into philanthropy. Previous to the creation of the Day One Fund, Bezos and his family had donated only $135 million to charities, including the Fred Hutchinson Cancer Research Center, a nonprofit providing scholarships for the children of parents who immigrated the U.S. illegally, and most recently to a bipartisan organization that gives campaign support to veterans running for political office.

It’s great that Jeff is doing it in a big way, and that can have an impact right there.

He has given $1.5 billion to Blue Origin, his company developing technology for space travel. Bezos calls the endeavor a blend of business and charitable work and hopes that one day we can move industrial activities off Earth, preserving it as a place to live and do less harmful activities.

“We will have to leave this planet, and we’re going to leave it,” Bezos previously told GeekWire, “and it’s going to make this planet better.”

Many in the philanthropic sector say they’re glad that the world’s richest man was directing some of his largesse a little closer to home. A 10-figure gift to homelessness and early education helps raise awareness for these causes and can inspire other foundations and donors to act.

“It’s great that Jeff is doing it in a big way,” said Jessie Rasmussen, CEO of the Nebraska-based Buffett Early Childhood Fund, “and that can have an impact right there.”

Previously: The multibillion-dollar question: What in the world (or universe) will Jeff Bezos do with his riches?