The investment follows a separate $350 million round that Instacart reeled in earlier this year. The Bay Area company has now raised $1.6 billion since launching six years ago.

We believe we’re in the very early stages of a massive shift in the way people buy groceries and we expect that one in five Americans will be shopping for their groceries online in the next five years.

“The U.S. is nearly a $1 trillion grocery market, and last year we saw almost every major grocer in North America bring their delivery business online in a significant way,” Instacart CEO Apoorva Mehta said in a statement. “We believe we’re in the very early stages of a massive shift in the way people buy groceries and we expect that one in five Americans will be shopping for their groceries online in the next five years.”

Since the announcement of Amazon’s blockbuster acquisition of Whole Foods last year, grocers reckoning with the alliance have been driven into the arms of Instacart, which has signed up or expanded partnerships with several top grocers in the U.S., including Albertsons, Kroger, H-E-B, Sam’s Club, Aldi, and most recently Walmart Canada.

“Grocery is the largest category within U.S. retail and it is also one of the least penetrated online,” Dan Sundheim, founder of D1 Capital Partners, said in a statement. “The industry is at a tipping point and there will likely be a significant acceleration in the adoption of online ordering for grocery delivery over the next few years. We believe that traditional retailers will lead the category online, as their brick and mortar stores are the most effective distribution centers for fulfillment of online grocery orders.”

Amazon, meanwhile, continues to expand its own grocery delivery service from Whole Foods Market, now available in 48 cities across the U.S. for Prime members. Amazon has also started rolling out grocery pickup from Whole Foods.

The acquisition put the relationship between Instacart and Whole Foods in an odd spot. The companies inked a reported 5-year partnership in 2016; Whole Foods also invested in Instacart at that time.

The delivery partnership is still ongoing — delivery.wholefoodsmarket.com directs customers to Instacart — but Amazon has been distancing itself from Instacart after buying Whole Foods. Bloomberg reported in March that Instacart delivery contractors were “shunted to a corridor upstairs” in a San Francisco store as Amazon made room for its own personnel.

At the Whole Foods location in Seattle’s Roosevelt neighborhood, Instacart branding has been removed from the delivery freezer. The first photo below is from August 2017, just after Amazon completed the acquisition — “Powered by Instacart,” the sticker reads. The second photo is from this week. 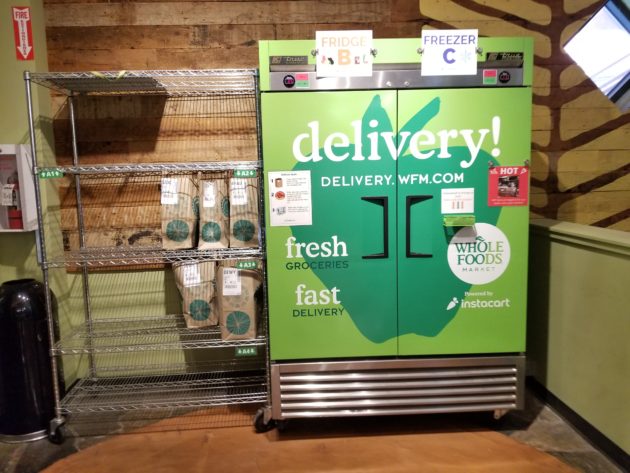 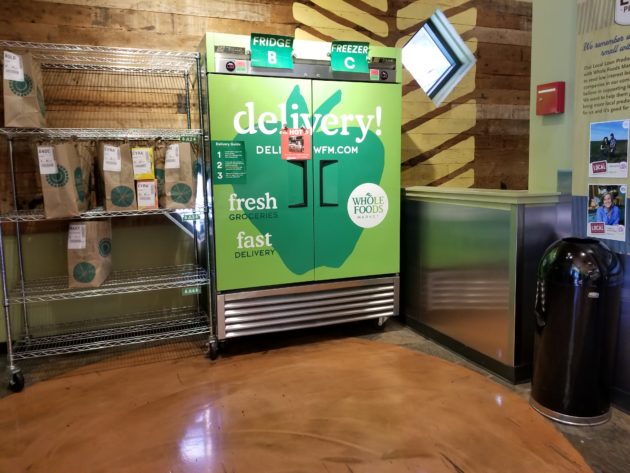 We reached out to Amazon for comment on the Whole Foods-Instacart partnership and will update this story when we hear back.

Mehta spoke about Amazon and Whole Foods at a recent Recode event. He wouldn’t comment on if Amazon was breaching any existing contracts with Instacart.

“It’s important to put these news stories in perspective — Whole Foods is about 1.5 percent of the overall grocery market,” Mehta said. “Most Americans do not shop at Whole Foods. The retailers that most Americans shop at are partners with Instacart.”