If the scene at T-Mobile’s headquarters on Monday was any indication, the future is in good hands with tomorrow’s leaders.

The wireless carrier this week hosted the final stage of its first-ever Changemaker Challenge, a new initiative it launched with social entrepreneurship non-profit Ashoka to help young people tackle social and environmental issues.

More than 300 teams applied from across the country, and 30 were invited to T-Mobile’s campus in Bellevue, Wash. to pitch their ideas in front of T-Mobile senior executives as part of a 2-day mentorship and training experience.

The pitches were polished. The entrepreneurs were energetic. The ideas were game-changing — bringing solar power to Puerto Rico; smashing the stigma surrounding mental illness; connecting high schoolers with scholarships.

It was no different than attending a Y Combinator or Techstars Demo Day, except for the fact that many of the participants haven’t even graduated high school yet.

T-Mobile CEO John Legere and T-Mobile COO Mike Sievert joined other company leaders on Monday to judge six pitches. To say they were impressed would be an understatement.

“That was unbelievable,” Legere said after hearing Sarah Raza pitch her idea for Aware, a group that aims to provide a more inclusive environment for students with special needs. “Can you start at T-Mobile tomorrow?”

Many of the ideas stemmed from hardship experienced by the students themselves. Her own battles with depression and anxiety helped inspire Alison Ingalls to join The Yellow Tulip Project, a community that helps teens struggling with mental illness. The aftermath of Hurricane Maria in Puerto Rico led J.I. Cruz back to his home country to build solar power products for thousands of people as part of Dios del Sol.

Other finalists included ArtPass, an educational curriculum to create a youth-friendly experience at children’s hospitals; and Peerlift, a non-profit that aims to increase access to college for low-income, first generation students.

T-Mobile originally planned to pick two winning teams and bring them back to Bellevue for further development and support. But Legere was so moved by the young entrepreneurs that he decided to invite all six finalists back to campus and give them an additional $30,000 from his own pocket. They will also all be featured on his Slow Cooker Sunday show that has more than five million followers.

“I’m absolutely stunned at the professionalism, the depth of their ideas, the magnitude of the impact,” Legere told GeekWire. “I didn’t hear anything in there that I wouldn’t personally want to go be apart of right now. It’s inspiring.” 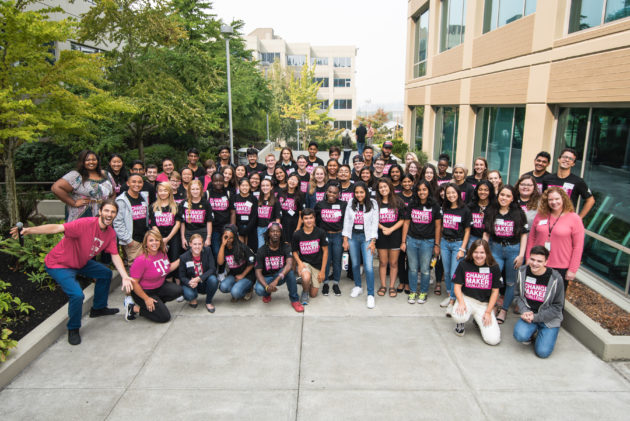 Janice Kapner, executive vice president of communications at T-Mobile, helped kickstart the idea for Changemakers. The company has seen revenues and customer growth surge in recent years and wanted to do something beyond its foundation work.

“Once you start to have success and momentum, you have a bit of a moral responsibility to try and share that in some capacity,” Kapner said.

Legere said organizing an event that helped support young people with their big ideas is on brand for T-Mobile, which has billed itself as the “Un-carrier.”

“Disruption is kind of our thing,” he said.

Westin Bills and his brother, Russel, came up with the idea for Echo Effect. It’s an app that encourages younger folks to use social media for good — instead of taking selfies and seeing how many likes rack up, what about taking selfies of yourself doing a good deed?

“It is our dream to change how our generation uses social media,” Westin Bills said during the pitch.

Sievert, T-Mobile’s COO, said Echo Effect reminded him of his wife, who has a habit of picking up litter whenever she sees it.

“What if she took a selfie of that every single time and challenged other people to do it? What if there was an Echo Effect?” Sievert told the founders after their pitch. “There’s something about this idea I really love.”

“You can pretty much put your mind to it and get it done,” Westin Bill said, when asked what he learned. “You can get as far as you can. Even if you fail, you can get up and keep going.”