Are you Elon Musk-ed out yet?

If not, you might want to give Insane Mode: How Elon Musk’s Tesla Sparked an Electric Revolution to End the Age of Oil a read. Author Hamish McKenzie, a former tech journalist who also worked in Tesla’s communications department, breaks down how Musk and Tesla have kickstarted the race to make the electric car more widely available — and the automakers who are now chasing him, including car start-ups in China and big automakers in the States and Europe. 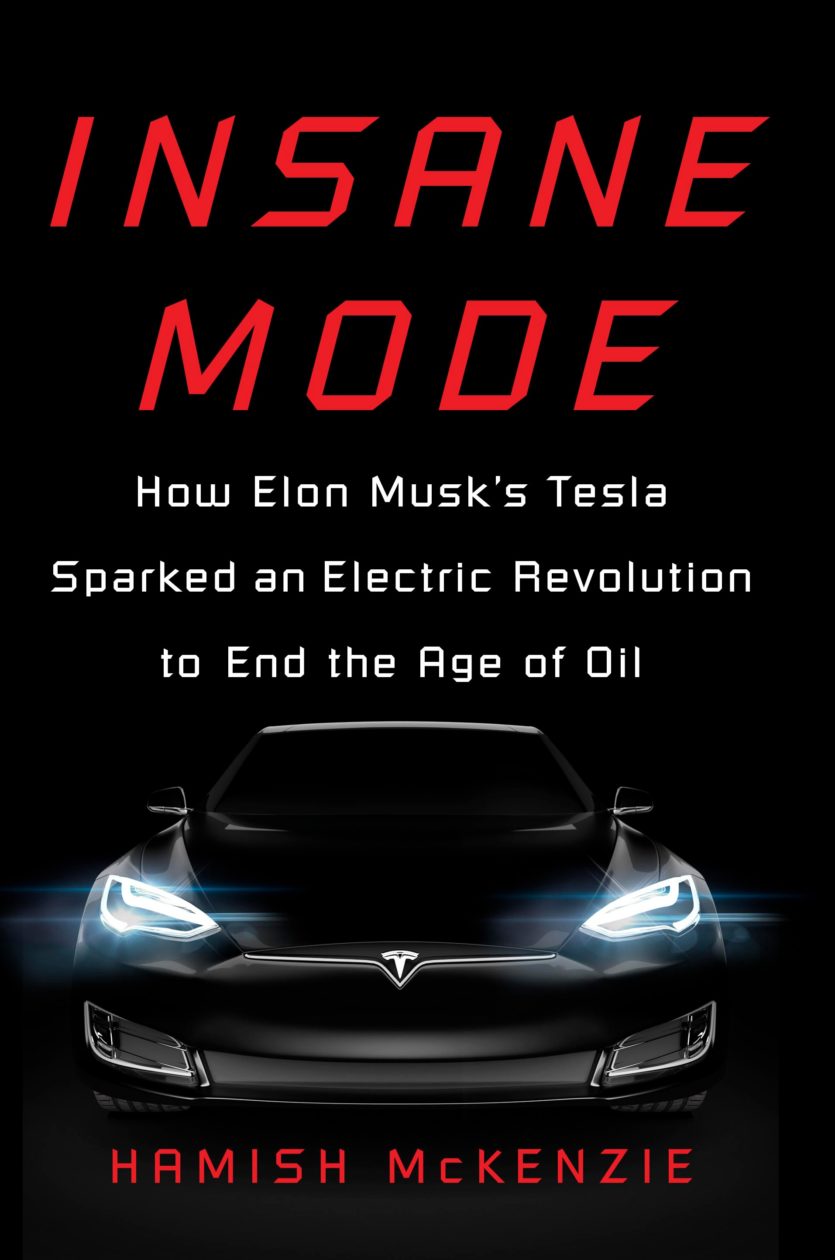 If you read the Ashlee Vance biography of Musk, or closely follow Musk and Tesla news, the first few chapters of Insane Mode might have you thinking, “I know this already,” but you should keep going. While McKenzie starts with a crash course in Musk’s and Tesla’s backgrounds, he then dives into the state of the electric car in general, from Henry Ford and Thomas Edison working on one at the turn of the 20th century. That project was sidelined when the internal combustion engine was introduced and was far easier to use, its adaptation helped with the abundance of cheap oil flowing from Texas.

Despite GM’s stab at an electric car with its EV1 in the late ’90s, the electric car stalled out. Until Tesla came along in 2003, founded by Martin Eberhard and Marc Tarpenning, and fueled by Musk joining as chairman and funding it a year later. Musk became CEO in 2008, in the middle of the last financial crisis. Along the way, Tesla has experienced its own many stutters, flounders and victories, but it’s definitely spurred a global race to the electric car that has several contenders.

Flash forward to now, where McKenzie takes us into the Nevada desert, China and Europe to show us everything that is happening in the electric car market to date. Chinese entrepreneurs are fascinated by it and their market is ripe for it, while automaking icons, like BMW, Daimler, and Volkswagen are perfecting their own versions of electric cars. Even the big automakers in the States realize they need to reinvest in the electric car market, too.

The accounts of all involved are told in a straightforward, conversational tone, but the overall message of the book is clear without being preachy: We need to shift to electric cars and the sooner the better. As battery storage improves and the technology becomes more affordable, it will no longer make financial sense to manufacture gas-powered cars, the author writes, and Tesla has a huge head start to remain the leader in the field.

As the grim climate reports keep coming, including last week’s Black Friday one, the biggest obstacle to advancing electric is big business. “I mean, I know you guys think global warming is real,” Musk is quoted saying at the Gigafactory opening in the book. “But the crazy thing is, a lot of people out there don’t. It blows my mind.” Without question, Musk has been one of the most vocal opponents to burning fossil fuels and proponent of saving the planet and humankind, which is still something that puts him ahead of his fellow entrepreneurs as well.

McKenzie spoke with us about why the inevitable electric car revolution should happen now.

What inspired the book, a love of cars?

I actually don’t like cars. I think they’re a problem, and I hope they will transition aggressively to electric to get off our addiction to fossil fuels.

I was working at PandoDaily at the time, and I had written a couple things about Elon and Tesla and SpaceX, and a nonfiction editor in the UK said, “Hey, do you think this is interesting to do a book about Elon Musk and his companies, let’s see if we can get him to cooperate.”

I reached out to Elon through his mother’s email. He got back right away and said he wasn’t sure about committing to a book project, but “would you come work for Tesla cause I like your work?” I went and worked for the company, and after a year of it, I decided it wasn’t what I really wanted to do long term, and liked the idea for going back to the book.

Let’s talk about Elon’s wild ride this year: His tweet of taking Tesla private, the SEC fine, and stepping down as chairman. What do you see next happening for him?

I don’t think it’s going to have a massive impact, and it might have a positive impact. He’s still CEO, and he’s described himself not just as a micromanager but a nanomanager. I don’t see any evidence of that changing. His position on the board has changed, but he’s still on the board, he’s just not chairman anymore. He was replaced with Robyn Denholm, a very experienced tech executive, and the hope is that it’s a little bit of a steadier head, less of a lightening rod for attention and controversy, and he understands the company well. I see that particular change, even if had to come by force, a positive force for Tesla and Elon Musk.

What would be good for Tesla is to have a similar setup as to what SpaceX has. The president of SpaceX Gwynne Shotwell runs operations, and Elon focuses on product and engineering. There is no Gwynne Shotwell at Tesla. They need a good COO type who can take the sort of mundane, difficult but boring regulatory stuff, administrative and operational stuff, and take that off Elon’s table. It would also be nice if someone tapped him on the shoulder and stopped him from doing things like tweeting he’s got funding.

That’s part of the Musk allure, though, his impulsive behavior.

That’s the danger in any department…the conflict of that personality type, like a Thomas Edison or Steve Jobs. And he’s trying to do something incredibly difficult, like starting a car company in middle of a recession and staving off the auto industry and big oil.

It’s been reported a lot that Elon is a difficult guy to work with, that he is frustrating, impulsive, demanding, but that might be just that personality type to make something as crazy as Tesla work. If the CEO of Tesla was anyone else than Elon Musk, it would’ve failed multiple times over. The CEO would’ve given up, so many times it looked impossible to keep it going.

I don’t want to glorify Elon too much, but a lot of this is driven by his humanitarian want to save the planet, and a lot is driven by his deep-seated need to be a hero. There is something about his personality, and at the core of it, it is driving his motivation to keep Tesla alive as well.

The GM news this week about closing plants that make more fuel-efficient cars — and consumers going to back to bigger, gasoline-chugging vehicles. How does this affect those companies investment in electric?

It’s a huge mistake to double down on gas guzzlers when electric is just starting. Ford and GM need to switch as aggressively to electric as they can. It’s terrible when they’re closing down plants and laying off people when those jobs are so needed in the U.S. And they’re not building the cars that are going to dominate the next 20 years. They’re building the cars that have dominated last 20 years. It’s revisionary, not revolutionary.

Volkswagen had the emissions scandal and had to reinvent itself as an electric car company. They’ve invested $50 billion in the next few years to be more like Tesla, instead of eeking out whatever they can from a dying industry.

Let’s talk about how Big Oil is still in the way.

We have the resources now, we have the technology, we have everything we need to make this transition to a better future. Electricity is cheaper, more abundant, and we will drive better cars that will be cheaper and more convenient to run.

This cabal of rich bastards who, because of their business interests, have decided to do everything they can to slow down the transition. Spending billions of dollars to retain their current market dominance, even though it’s good for nobody but themselves. They lack imagination and vision to do what the world needs. Eventually, they are going to lose, things are going to change, and the thing is we need this change to happen.

The solution is here, and it’s a better one. Elon Musk, for all his foibles and shortcomings, has shown that electric cars can be better, you’ll have more fun, and eventually, they’ll be cheaper than gasoline cars, too. You can take power that’s generated from wind and solar, and store it in the batteries that will make renewable energy way better than burning oil, coal and natural gas. We’ve got this technology. It’s just deciding we’re going to do it and moving as aggressively as we can and doing it.

What should Tesla be doing now strategically over these other electric car companies?

It’s hard to not see them being the leader, as long as they can stay alive, and that’s always been Tesla’s challenge. They are the one company that has been focused solely on electric since inception, and they’ve been around for more than 10 years, so they have so much of a huge head start. They have the brand credibility, the best talent in the world wants to go work for Tesla, they don’t want to work for GM’s electric division. The only existing automaker who has a remote chance to pull up alongside Tesla is VW.

Insane Mode: How Elon Musk’s Tesla Sparked an Electric Revolution to End the Age of Oil is out now.