Housing in America is getting more expensive, disproportionately burdening middle- and low-income people, and perpetuating wealth inequality. Those dynamics are felt acutely in West Coast tech hubs, like San Francisco and Seattle.

That’s according to Harvard University’s latest State of the Nation’s Housing report released Tuesday. The report shows that the country’s housing market has soundly recovered from the Great Recession but underlying issues portend a dark future for renters and would-be homeowners, particularly in expensive cities.

One of the biggest takeaways from the report is the growing number of Americans who are cost-burdened by housing. Nearly one-third of all households spent more than 30 percent of their incomes on housing in 2016. That’s much higher than previous decades though the share has declined slightly in recent years.

For the lowest-earning quarter of American households, real median incomes grew just 3 percent between 1988 and 2016. The median income for adults 25 to 34 grew just 5 percent. As wages for young people and low-income Americans lagged, median rents rose 20 percent faster than inflation between 1990 and 2016 and median home prices grew 41 percent faster.

“If incomes had kept pace with the economy’s growth over the past 30 years, they would have easily matched the rise in housing costs,” said Daniel McCue, the lead author of the report, in a statement. “But that hasn’t happened.” 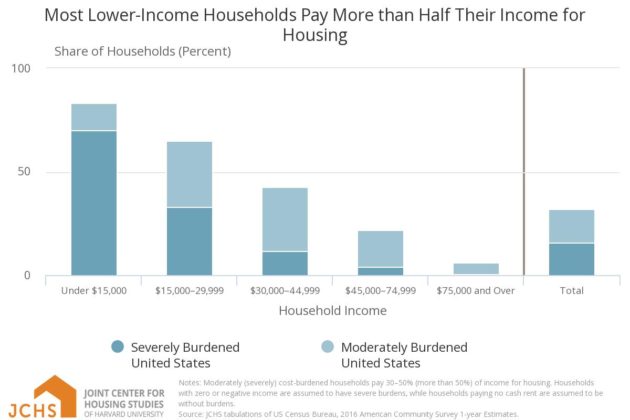 We also aren’t building enough multi-family housing to meet the needs of Americans. New construction ticked up slightly between 2016 and 2017 but the increase was driven entirely by single-family homes, which increased 8.6 percent. New construction on multifamily buildings declined by 9.7 percent to 354,100 units in 2017.

The result is shrinking for-sale inventories, particularly in booming cities with swelling populations of newcomers. In 13 of the nation’s largest metro areas, home prices rose more than 10 percent in the last year alone. The Seattle metro region had about 6,000 homes for sale in 2017, compared with 22,000 in 2010. The San Francisco region had about 3,500 for sale last year, a steep decline from the nearly 11,000 homes that were on the market in 2010. Of course, that is an imperfect comparison. In 2010, the country was in the midst of a historic recession and surplus of homes for sale. 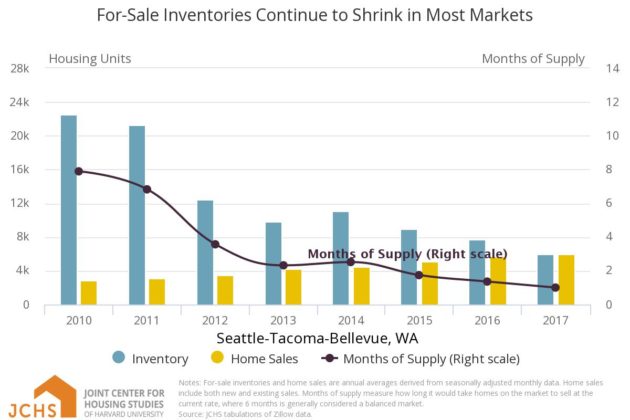 Homes are also selling far faster than is considered healthy for the housing market. In about one-third of the country’s large metro areas, for-sale time averaged under 2 months in 2017.

The upshot is, in cities with booming job and population growth, it’s becoming dramatically more expensive to buy a home. The prospect of homeownership is often out of the question for people living in those cities who aren’t benefiting from high-paying jobs in sectors like tech.

The national homeownership rate is actually up for the first time in 13 years at 63.9 percent but that increase is driven by a narrow demographic of Americans. There is a larger gap between black and white homeowners than there was 30 years ago and rates of homeownership among young adults have steeply declined. Homeownership rates for young adults are lower than in 1988 and the shares of young adults living with their families or roommates are at all-time highs.

If these housing trends continue, they are likely to inflame resentment between people who are benefiting from the modern economy and those who feel left behind.