Migration has been vital for the tech sector for years, but recently global migration has become a political hot-button issue for the United States like no other. While President Trump focuses on limiting migration, and worldwide sentiment grows that America is not as welcoming as it once was, how does this affect our tech sectors when it comes to moving forward in a global economy?

In The Gift of Global Talent, Harvard Business School professor William R. Kerr breaks down the modern-day landscape of tech sector jobs in global migration — what’s happening, what we need to do, and ultimately, how being open to talent benefits us all. As the co-director of Harvard’s Managing the Future of Work initiative, he works with companies and governments worldwide to help them figure out how to benefit from talent migration.

Unlike Trump’s attacks on migrants that tend to focus on foreigners taking away blue-collar jobs, Kerr focuses on highly skilled, educated workers. In analyzing migrant and talent data, his message is clear: While there are always pain points when adjusting to a new work landscape in capitalism — displacing older American tech workers with younger, cheaper foreign talent for one — ultimately embracing more open borders to encourage the spreading of the global talent diaspora will benefit everyone, from Seattle and Silicon Valley, to Beijing and Bangalore.

Additionally, we cannot continue to neglect our own education system if we are to even maintain our place in the innovative global food chain. We need to “redouble our efforts” on strengthening our own talent pool with better education K-12, and encourage American workers to do stints overseas to learn from their foreign colleagues. 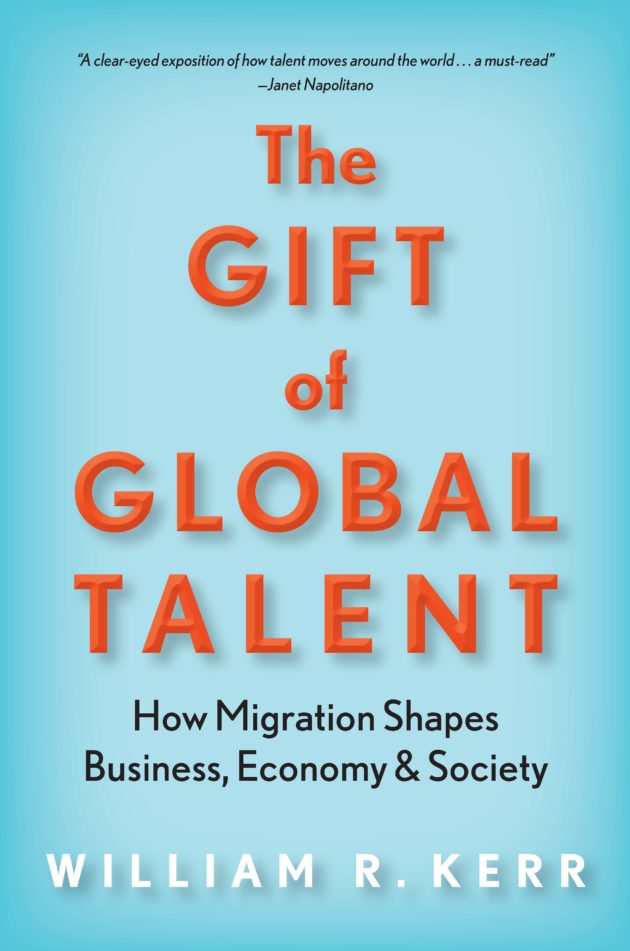 What does this cost us if we continue our war on immigrants? In tech, immigrants account for about a quarter of patents and entrepreneurship, and more than half our of Ph.D. workforce, he writes. With a sharp rise in educational efforts worldwide, “by 2030, projections hold that nine out of 10 young college graduates will live outside of the U.S,” and furthermore, “China and India are projected to be home to half of college-degree holders between the ages of 25 and 34.”

Kerr writes that immigrants contribute to our local economies, support our universities as they pay full tuition, start businesses, and even if they return home, continue to think on a global scale. America also provides business opportunities for bright young women — a huge, untapped resource globally as “women now represent more than half of all skilled migrants.”

In an interview with GeekWire, he shared his thoughts on the Amazon pick for HQ2 (and 3), tech’s role in the battle against inequality, and why American workers should consider a stint abroad.

Let’s start with biggest news story of the month, possibly the year, in tech: Amazon’s HQ2s now landing in New York and outside D.C. You discuss the high appeal of urban areas — lots of tech talent, attractive to potential employees. Can you explain a few of the pros/cons of landing a huge tech company in these locales?

This decision makes a lot of sense for a company like Amazon and its talent sourcing. Choosing two locations for their expansion allows them to tap into two distinct talent clusters, each with their own strengths. Amazon’s choice of NYC and DC aligns with the growing consolidation of tech around key talent clusters that has been going on for some time. Amazon choosing two of the most dynamic urban areas in the U.S. means they’ll reap extra benefits. For locals, they will gain benefits like stronger city recognition and a larger scale for their local talent pools, but also face greater congestion and real estate prices.

Amazon had the size to become the anchor tenant for something new and different, rather than loading onto places already doing well.

I am a bit disappointed that Amazon did not buck the trend by choosing one of the many less prominent cities that were clamoring for HQ2. Amazon had the size to become the anchor tenant for something new and different, rather than loading onto places already doing well. Given the company’s history for challenging convention, I had hoped their HQ2 pick would have been an anomaly that the book would have needed to explain, rather than conforming to the broad regularity.

While tech talent is embedded on the coasts, you mention a few centers in the Midwest that are making strides. What else could areas do to encourage economic development? Is it even feasible for tech companies to consider a place like Detroit?

Let’s start by recognizing that the Midwest does receive global talent in a way that is underappreciated. Chicago is a key talent cluster in the U.S. Many companies like Conagra have relocated to the Windy City, and it is undergoing many of the urban transformations described in the book as companies position themselves for incoming talent. Detroit’s auto sector has a college-educated workforce that is 26 percent foreign born. So while the coasts have been even stronger, there are certainly ingredients to work with in the Midwest.

To become even more attractive, these cities need to focus on nurturing growth from within. Much of this is natural, like building on the strong schools that are already present and ensuring a workforce that is attractive for tech companies. Given the power of local entrepreneurship to growth, Midwestern cities need to identify catalysts that help spark new businesses and hold onto budding tech entrepreneurs. The book discusses CIC, the prominent co-working and innovation center at the heart of the Boston tech ecosystem. CIC’s first expansion was in St. Louis, and it has done very well there. These cities should also tap into the emerging power just across the border in Canada, which has amazing AI and tech potential emerging in cities like Toronto and Waterloo.

You also mention that in this new global economy, people in Western nations are also working in other tech environments. Why should American companies encourage workers to go abroad for a few years?

The gains from cross-border exchange can be substantial. Leading U.S. tech companies often earn the majority of their revenues outside of America, and that’s where many of their employees are. HQ is not going to be very effective in its decision-making if top talent and workers only rely on video conferencing and email compared to firsthand experience.

Furthermore, many of the world’s talent clusters, like Berlin and Shanghai, have a lot of frontier insight to offer to American companies that can enable innovation. The best way to access this knowledge, and to gain the benefits of the talent working in them, is to connect to these global clusters. Cross-border teams have been shown to increase innovation through the exchange of knowledge and expertise, providing better market entry prospects than teams composed exclusively of U.S.-based employees or employees hired exclusively in new markets.

Do you see more immigrants from China and India returning home to start companies as their own tech ecosystems strengthen, or still trying to make it in America first?

Absolutely. Personally, I’ve seen over the last decade many more talented graduates from Harvard and MIT thinking of going to China and India to launch a career and often their own start-up. And the twist is, some of these graduates are not Chinese or Indian returnees, but other nationalities who see a big potential in emerging markets and want to be a part of it! These anecdotes are playing out on a large scale: The number of Chinese returning to their home country following studies in the U.S. is rising, for example.

America should not decry this overseas development, as we can all benefit from stronger tech ecosystems in other parts of the world. But, it also means that we can’t just sit on our thumbs and believe America is going to be the perennial default option. We must make America top of mind to new graduates for the opportunity our country has and then also ensure access to immigration visas.

How do you see the growing hostility toward immigrants in America, UK, Germany, etc., affect this diaspora of talent? Are more people wanting to stay home now, or still hungry to work in our markets?

There is no doubt that the political rhetoric against immigrants in America is decreasing its attractiveness to global talent. Behind the unpleasantness and hostility lie genuine efforts, at the policy level and through administrative actions, to decrease the ability of immigrants and their families to work and stay in the U.S. long-term.

This introduces uncertainty into the choices migrants make — not only might an immigrant feel less welcome in the U.S., she might also not know whether she will be able to bank on the U.S. upholding its commitments to her and not kick her out of the country, even if she has a job.

People around the world now see this uncertainty for the U.S. and, very understandably, might not be willing to invest in moving to America when surer bets exist in countries like Canada or Australia. American immigration policy has never been pleasant or “user-friendly,” but it was not fraught with the uncertainty that it has now.

Today’s tech firms employ fewer people than the previous giants of the past, like GE, thanks to better computers, AI, etc. You also mention some possibilities for tech companies to offset a bit of the disruption they cause to local environments (displacing people, rising homelessness, ageism, layoffs). Do you see tech companies stepping in and taking accountability for any of this disruption, or staying resistant? I’m specifically thinking about the head tax debates in Seattle, which failed, and in San Francisco, which passed.

It is in the best interests of companies operating in talent clusters to maintain those clusters’ growth as well as their livability. If a place becomes undesirable, people will move away and bright, ambitious young workers will not want to move there – and consequently those companies will miss out on that talent. These people will seek out opportunities in other areas of the country, or in other countries altogether. So I think that we’ll only see more investment by tech companies in these areas, and in America as a whole.

That being said, tech companies could certainly do more to support those displaced and share the benefits of the enormous prosperity generated. Some companies are moving toward this, for a recent example look at some of the education-based pledges Amazon made to New York City as part of choosing to locate HQ2 in Long Island City, but, given the enormous gains they have reaped over the last two decades, tech companies could and should do even more. The mounting political and societal strains against them make it in their best interests to start developing and communicating a better solution.

The Gift of Global Talent: How Migration Shapes Business, Economy & Society by William R. Kerr is out now.