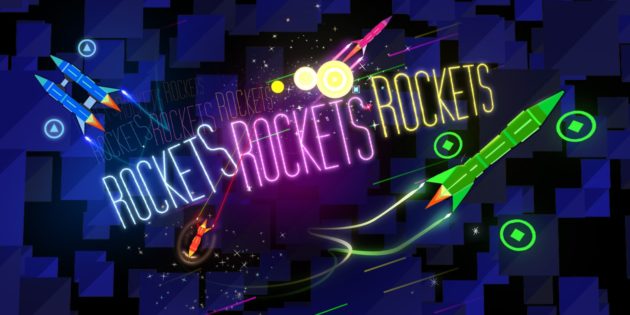 Rocketsrocketsrockets is one of those games where the title is a near-perfect encapsulation of what the game is all about: you play as a rocket, firing rockets at other rockets. There’s no story, no pretense thereof, and no attempt to take itself at all seriously. It’s just rockets, all day, every day.

Made by Radial Games, based in Vancouver, B.C., Rocketsrocketsrockets was released earlier for PCs and the PlayStation 4. But the game is a good fit for the Nintendo Switch, where it made its most recent debut. When you start the game, you’re up and running within maybe a minute, and it’s rare for a single match to go longer than two. The controls fit neatly onto either half of a JoyCon, and the graphics are terminally simple, with colorful, smooth animation.

There is a significant issue where the game doesn’t really work with more than two players unless you’re on an impressively large screen. Even with only two players, it’s easy to lose track of what’s happening amidst the crowds of explosions and level geometry. This runs contrary to the strengths of the Switch as a goes-anywhere portable machine, but in fairness, it’s hardly the only Switch game that has that problem. 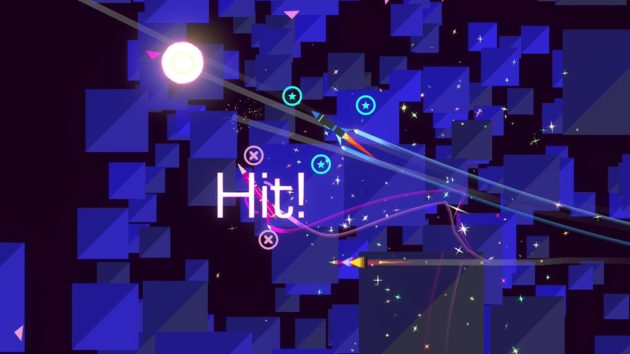 A given round is simple: you pick rules, a map, and a color for your rocket, then get unleashed into action against your friends or the CPU. You’ve got direct-fire rockets, bombs, and mines to use offensively; you take no damage for bouncing off the scenery; and any player who takes three hits is out of the action. Each player’s current number of remaining hits is represented by orbs swirling around their rocket, and hitting another player means you get to steal one of their orbs, so you can have some surprisingly vicious back-and-forth matches.

Rockets is a little like dogfighting and a little like bumper cars, if bumper cars were equipped with semi-automatic rocket launchers with infinite ammunition. Your rockets can corner surprisingly well but also accelerate rapidly, so they turn like, well, rockets. At long ranges, a bout of Rockets is mostly just firing for effect, but you can fill the air at medium to short range with rockets, bombs, and laid mines, forcing your opponent to watch where they’re going before they fly straight into a series of explosions. There’s a little more strategy to it than you might think at first, but only a little, so virtually anyone can be up and running here within a couple of minutes of first picking up the controller.

There’s an optional mode you can play, Zen, where you can zoom around a map for as long as you like without any violence involved (the pre-match countdown even says “3, 2, 1, relax!”), drawing pictures with your jet’s contrail like a makeshift Etch-A-Sketch. It doesn’t sound like much, but it’s oddly soothing.

Rockets is a little slight; once you’ve played it for about five minutes, you’ve seen most of what it’s got to offer. It’s also only $4.99 on Nintendo’s digital storefront, which makes it a bargain of sorts. You will, at least, get a decent evening or weekend out of it. (If you happened to play Starwhal on the Wii-U, Rockets will remind you of it.)

Lately, it’s come in handy more and more often for me to have a few games like Rocketsrocketsrockets around, where they aren’t necessarily the deepest or most strategic things in the world, but they’re so easy to learn and play that they make an excellent way to chill out at the end of the night. When everyone’s getting tired or has had a few drinks, you can pop in something like this, with a lot of flashing lights and come-from-behind victories, to calm down and have a few laughs. It’s probably the most relaxing way to blow your friends up.