“Bullet hell,” or danmaku (Japanese; lit. “bullet curtain”), is a sub-genre of shoot-’em-up games that’s all about dodging constant streams of enemy fire. The archetypical bullet hell shooter — many of which never officially make it out of Japan — is ferociously difficult and represents a pure test of the player’s reflexes and pattern recognition, as you spend your time scrambling for that fleeting half-inch of screen estate that isn’t currently occupied by at least two different things that will kill you.

From the moment I first saw it at PAX, Evasion was described to me as a bullet hell shooter in VR. It was developed by Archiact, a studio based in Vancouver, B.C., which hopes to use it as a big flagship franchise going forward.

When I got the chance to play it on my own, my first impression was that it was one of those games that was designed and balanced around team play, which meant anyone trying to play it solo was working with a severe handicap from the start. I was getting absolutely murdered by enemies that could hit me from any direction at any time, with mission objectives that further limited my ability to fight back.

When the game is built around constant movement in order to evade enemy fire, it feels doubly restrictive when you’re forced to stand still for a while. But of course, it’s a bullet hell game. They aren’t supposed to be fair.

The more experience I got, the more I was able to adapt and overcome each challenge, even as the next one queued up to take a swing at me. Evasion is challenging in an old-school way, where each time you reach a new area, you’ll get through it by the skin of your teeth if you make it at all, but the next trip will be a little easier, and the trip after that will feel almost easy.

Enemies show up in vast packs from all around you, but they do so in predictable patterns, and you have a lot of tools at your disposal with which to deal with them. It’s a game about forcing fairness onto a fundamentally unfair situation, and doing so with style. 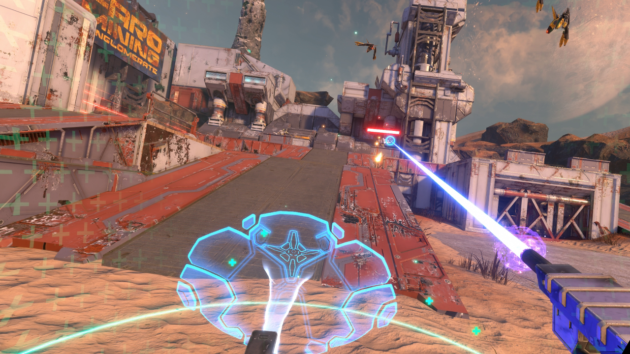 Evasion is set in the nondescript space future, where you play as a member of a Vanguard, a team of troubleshooters from a rapid-response unit, which features a snarky AI handler and, to go by what she’s saying, a low survival rate.

The issue at the start of the game is that a mining colony has been invaded and seemingly depopulated by the Ophera, a race of robot insects, for no reason you can determine from orbit. You’re dropped into the fray to figure out what’s happened to the colonists, and while you’re there, to murder any alien bug that so much as glances in your general direction.

You can play as one of four specialized units, each of which has a different arsenal. In each case, however, you’ve got a main gun in one hand and a portable energy shield in the other. Any enemy fire that strikes the shield gets reflected backward, letting you provide your own hard cover on the fly. The same hand that bears the shield also contains an energy lash the game calls a “tether,” which is used to interact with objects, yank power-ups over to you, heal fallen co-op partners, and finish off weakened targets.

It probably also makes toast. The tether does it all.

The trick with Evasion is that while you’re surprisingly durable — healing items don’t simply restore a set value, but drop a healing field at your feet that rapidly restores lost health for as long as you stand in the area — the game is also set up to encourage you to avoid incoming fire. You can get power-ups that gradually improve your gun’s standard mode of fire, but the gun’s power level gets lowered dramatically when you take damage.

It’s a lot like the old Gradius games, or Life Force on the NES: you can sort of stumble through Evasion by relying heavily on health, but as the name of the game suggests, you get further more efficiently by dodging and reflecting as much as you can. You’re rewarded for your ability to skate through enemy fire with a better, more destructive offense. 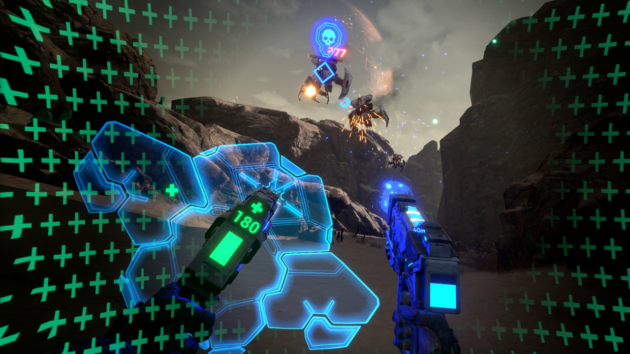 There are a lot of shooters in virtual reality in 2018. A lot of them aren’t far removed from the old light-gun games you’d play in an arcade 15 years ago. The only real difference is in the controls, and hopefully in the degree to which you’re immersed in the experience.

Evasion, conversely, feels like its own thing. It took me a while to get used to it, and I have to figure it’s going to be brutal on people who don’t have my experience with the genre.

If you’re fine with a game that’s more than a little sadistic, and you don’t mind wrestling with Evasion‘s particular learning curve, it’s a challenging, occasionally funny shoot-’em-up that feels immediately rewarding as you learn its ins and outs. A challenge that’s crushing you on one run will suddenly feel like a stroll in the park next time, and that’s how it sucks you in.