Will Boston benefit from the luck of the Irish in its quest to land Amazon’s HQ2? Internet gamblers think so.

Online bookie PaddyPower is collecting bets on which of the 20 cities on Amazon’s not-so-short list will land the company’s massive second headquarters and Boston is leading with 3-1 odds.

Austin and Atlanta are tied for second with 7-2 odds, followed by Montgomery County and Pittsburgh at 8-1. 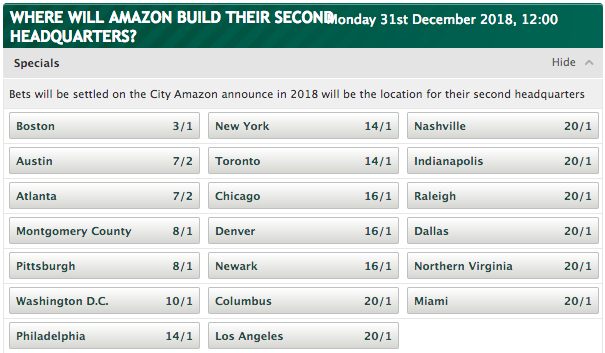 Boston does have strong selling points for the $5 billion project, which promises to bring 50,000 high-paying jobs to the chosen city. It has a dense concentration of top research universities and engineering talent. Amazon is also already making big investments in Boston.

But that hardly makes Beantown a shoe-in. The city’s public transportation needs an update and it is already densely populated. If Amazon wants more room to grow, some of Boston’s competitors can offer more space.