Getting lost in the worlds and history of some of your favorite comic book superheroes may have never been easier, thanks to an expansive new exhibit at Seattle’s Museum of Pop Culture.

“Marvel: Universe of Super Heroes” is MoPOP’s largest exhibition to date, and the facility needs all of two levels and 10,000 square feet to tell a nearly 80-year story.

The exhibit, which opens Saturday and runs into January of next year, features hundreds of artifacts including original comics art, movie costumes and props. Many items have never been displayed in public before now. Interactive features also allow visitors to dive deeper into how comics were created and to get up close to their favorite figures for photo ops, including Spider-Man, Black Panther and The Thing.

Benjamin Saunders, a professor of English at the University of Oregon and a leading scholar on comics history, is the chief curator for the “Universe” exhibit and he explained this week during a preview visit that it was his dream job to help put the show together.

“We can assume a high level of knowledge and interest in the movies,” he said of blockbuster productions put out in recent years by Marvel Studios. “What I wanted to show was the relationship between that contemporary storytelling platform and the still living and vibrant, exciting platform of comic book storytelling.”

And to be sure, the exhibit pays a good deal of respect to the famed creators of the work, including Jack Kirby and Stan Lee, as well as to how comics responded to historical events and how they dealt with issues such as race and gender. Fans of heroes such as Captain America, Spider-Man, Black Panther and many more will also learn more about the narratives that shaped each character.

But for those whose introduction to Marvel may have just started with the record-setting “Black Panther” film, or any of the hits before it (“Iron Man,” “Thor,” “The Avengers,” “Guardians of the Galaxy,” etc.), costumes and props provide up-close reminders of how memorable the various franchises have been in recent pop culture history.

Here’s a closer look at some of the items on display: 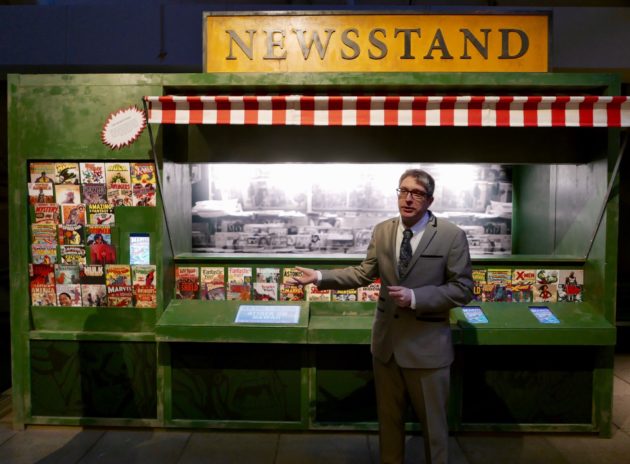 In the photo above, Saunders shows off a newsstand which serves as the opening display in the exhibit. “This is the first point of contact with these fantasies of glamour and power that anybody had for the first 30 years or so of the medium.” Real-world newspaper headlines — such as the moon landing or President Nixon’s resignation — are displayed along the bottom of the stand and then reflected in comics above which took on the topics. 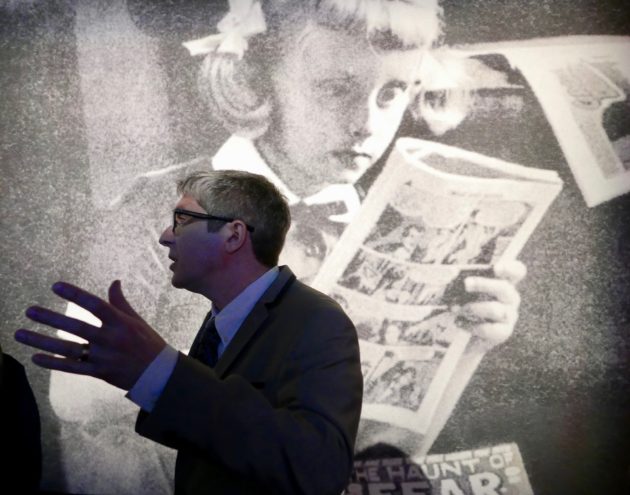 A seven-minute film on comics history and Marvel’s place in it serves as an introduction for visitors who aren’t as immersed in the world as Saunders. 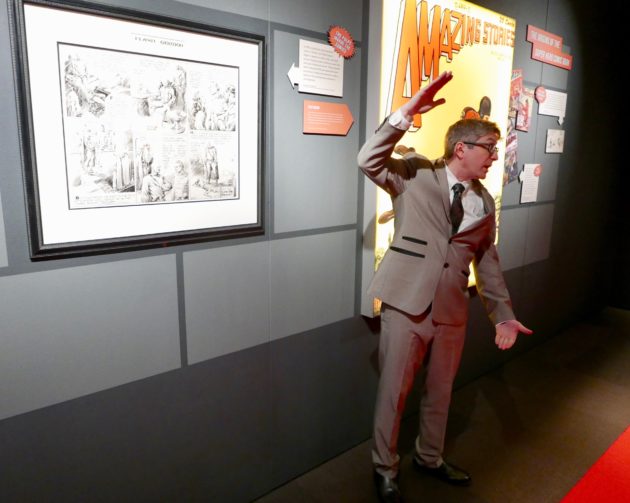 Early art for Flash Gordon is on display as Saunders explains the size of newsprint pages which gave comics a dynamic platform, especially on Sundays. “You could just spread it out on the floor and fall into the page,” Saunders said. “These were an enormous influence on the first generation of superhero creators.” 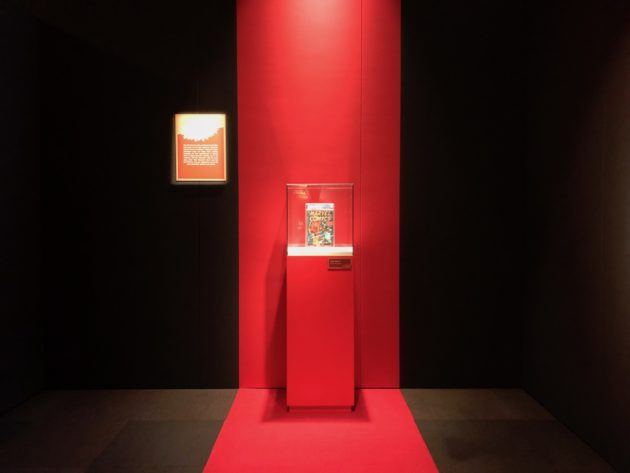 A red carpet of sorts leads to one of the few actual comic books in the exhibit, “Marvel Comics No. 1,” the very first Marvel comic, with cover art by Frank R. Paul, in 1939. “We tried to give it as much of a fetishistic aura as possible,” Saunders said. 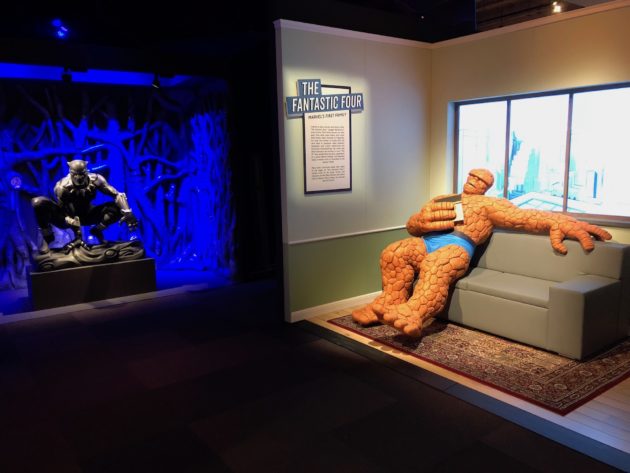 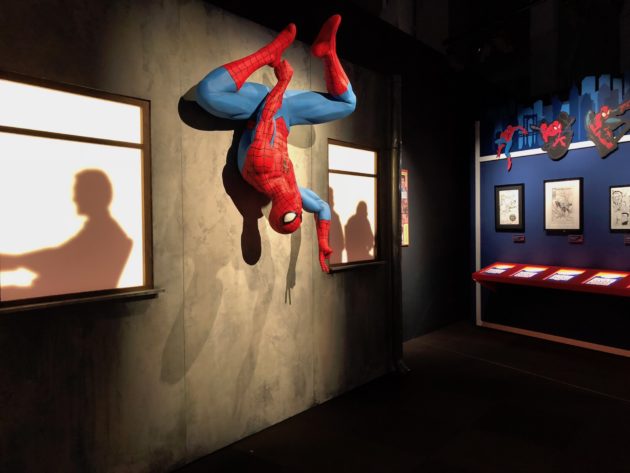 Fans looking to step alongside some of their favorite characters for photo ops and selfies can do so with The Thing, Black Panther and Spider-Man. 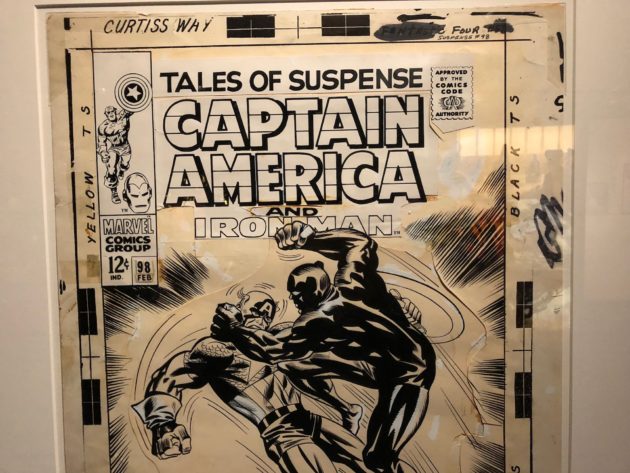 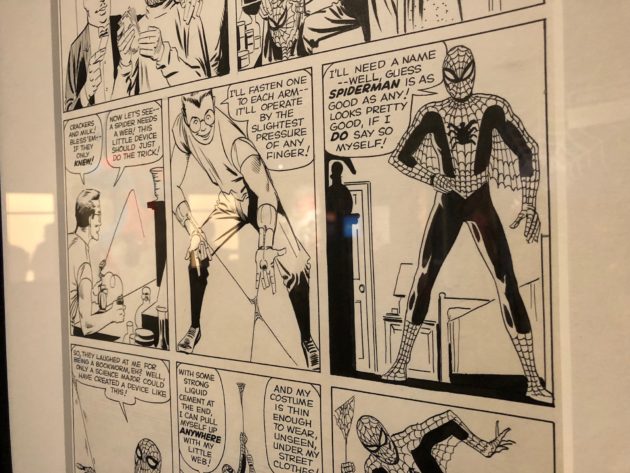 Original artwork, often in the hands of private collectors, is rarely seen by the public. The “Universe” exhibit contains many such pieces, including a page showing the original art for Spider-Man’s origin story — the first appearance of the hero’s iconic costume and web shooters. The page — which Saunders called “about as signature a piece of 20th century Americana as you could hope to find” — was feared lost for many years, but in 2008 was anonymously donated to the Library of Congress. The 1962 art by Steve Ditko will only be part of the MoPOP exhibit for three months. 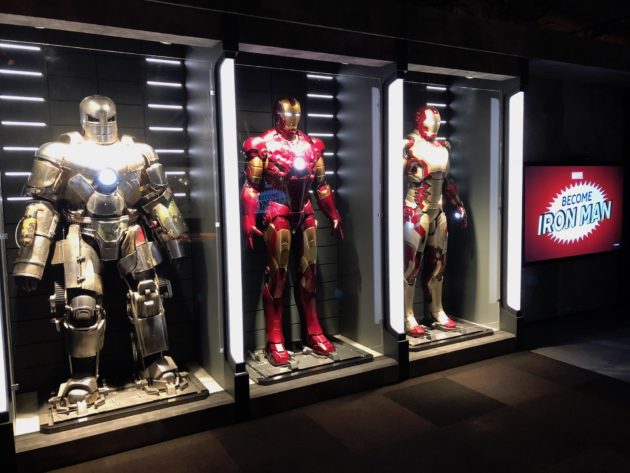 Iron Man gets a fairly big billing in the exhibit, with a space designed to look like Tony Stark’s lab, where visitors can virtually strap into the suit and then learn to fly via an interactive / augmented video display. Three movie costumes are also on display. 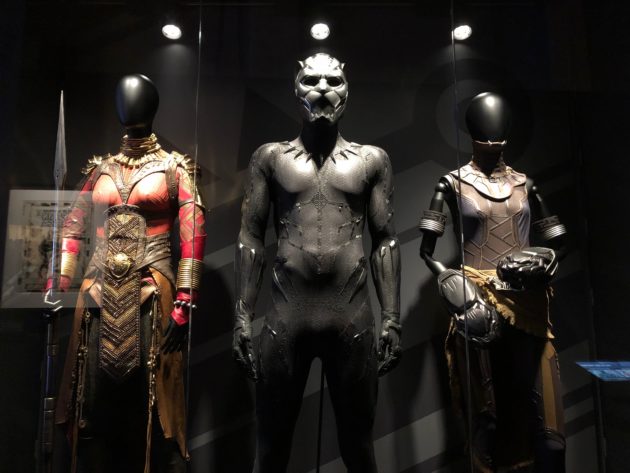 Other movie items and props include three costumes from “Black Panther,” which feels especially timely given the current success of the film. The MoPOP team was in touch with the studio before the film even opened — “I had a feeling it was going to be big,” Saunders said. 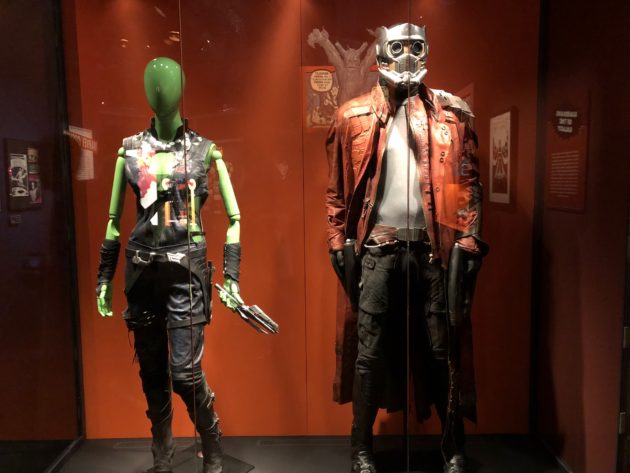 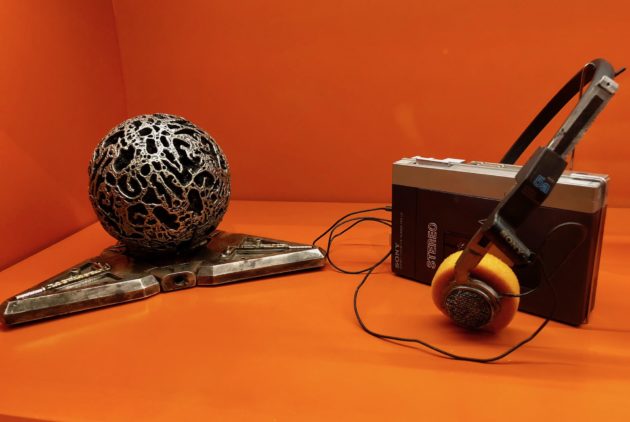 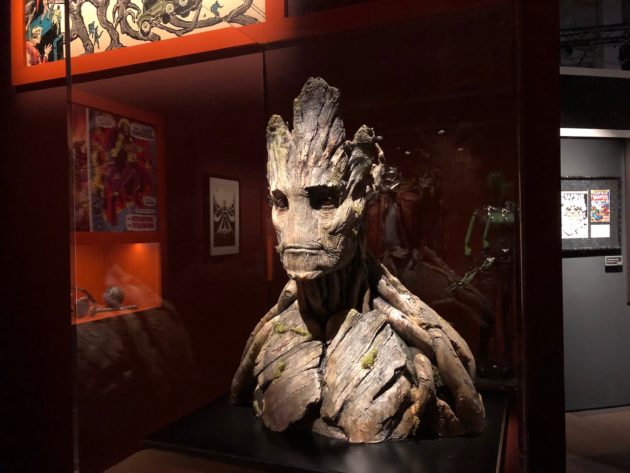 Costumes from “Guardians of the Galaxy” are also shown, along with Star-Lord’s Walkman, The Orb, and a bust of the character Groot. 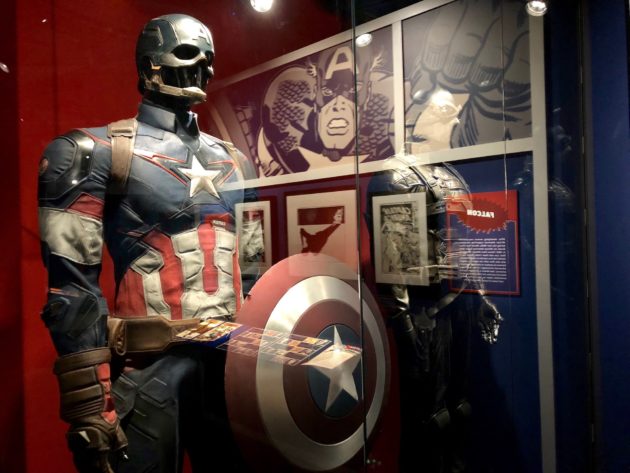 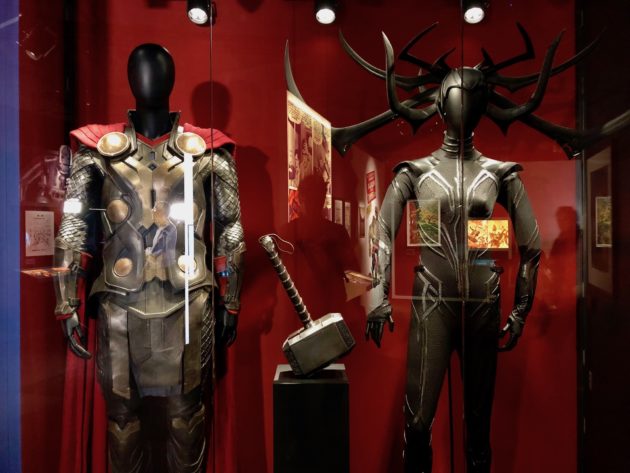 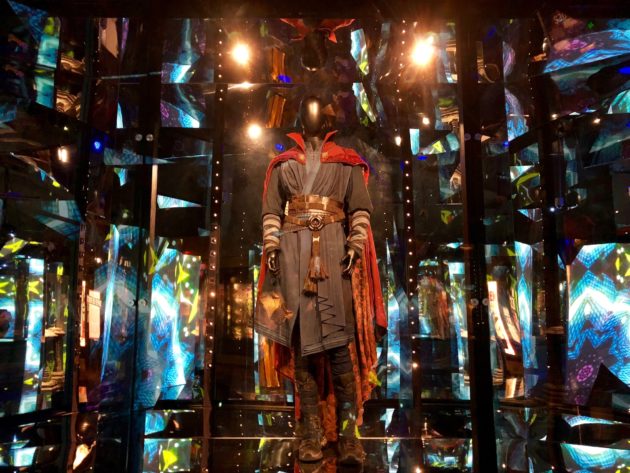 A hall of mirrors and video screens showcase the world of Doctor Strange, a character created in 1963 as the first and most important magic user in the modern Marvel universe, according to MoPOP. 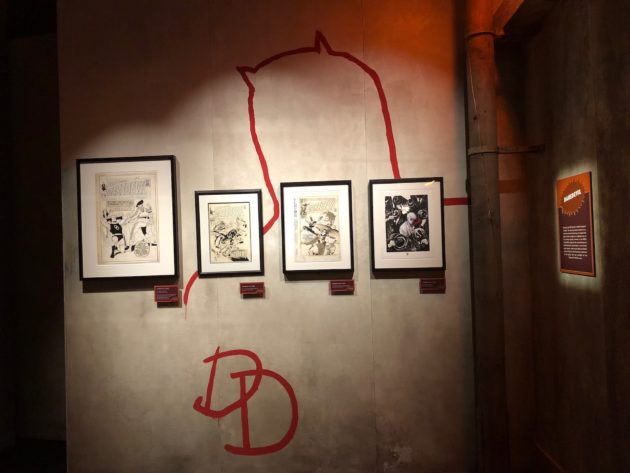 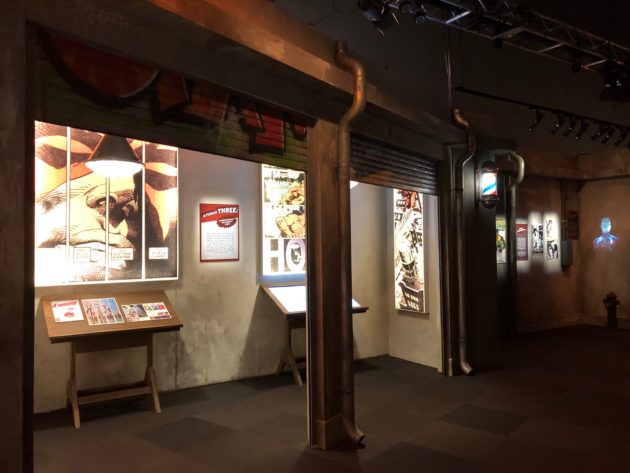 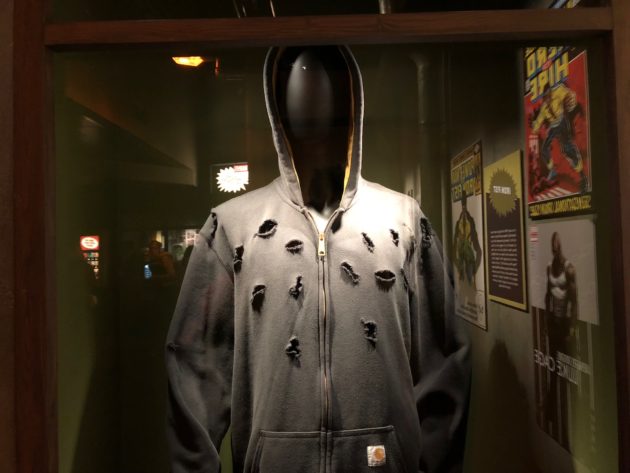 The exhibit concludes among what are called “street-level heroes,” which include such characters as Daredevil, the Punisher, Jessica Jones and Luke Cage — “defending against more human forms of evil on the small screen.” Cage’s bullet-riddled hoodie is among the artifacts.