Portal and the larger Portal+ use AI-powered technology to automatically pan and zoom and minimize background noise for video calls. It integrates with Facebook Messenger and features voice controls: “Hey, Portal.” They are the first Facebook-branded hardware products.

“Both models are designed to help you feel closer to the important people in your life and make video chats feel less like a call, and more like you’re actually in the same room,” Facebook said in a blog post.

Facebook has dealt with numerous recent privacy and security-related issues, so getting consumers to trust the company with its new hardware device may be challenging.

“Yet the fancy gadget’s success depends not on functionality, but whether people are willing to put a Facebook camera and microphone in their home even with a physical clip-on privacy shield,” TechCrunch wrote in its review. 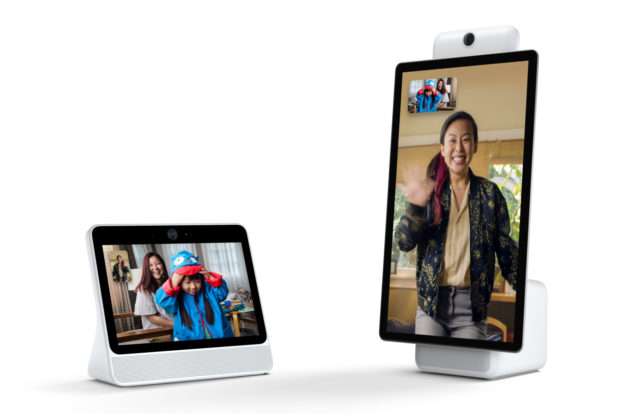 Facebook dedicated a large part of its blog post announcing Portal to address privacy and security, noting the ability to disable the camera and microphone, the camera cover, screen locks, encrypted video calls, and AI tech that runs locally on the device.

The 10-inch version retails at $199 and is available for pre-order today, with shipping slated for November. The 15-inch version, which features a rotating screen, is priced at $349. You can buy the device directly from Facebook, or via Amazon and Best Buy.

The Portal devices look similar to Amazon’s Echo Show, which also sports a large video screen, as does Google’s reported new Home Hub. However, as The Verge review noted, Portal’s capabilities are limited.

“But the limitations might also prove to be frustrating for users of the product,” The Verge wrote. “You can’t watch YouTube; there’s no web browser; WhatsApp and Instagram are nowhere to be found; and you can’t send or receive normal Facebook messages, even if they’re video recordings. If you buy the Portal, you have to really want to video chat with other people on Facebook, and do so from one room in your home, on something other than the phone or laptop or tablet that you likely already have.”