Expedia Group posted $2.88 billion in revenue across all of its brands, up 11 percent year-over-year and meeting analyst expectations for the second quarter.

The Bellevue, Wash.-based travel giant posted $1.45 in earnings per share, eclipsing analyst expectations of 89 cents per share and sending its stock up 10 percent in after hours trading.

Expedia reported profits of $213 million, up more than 50 percent from $141 million in the same quarter last year. 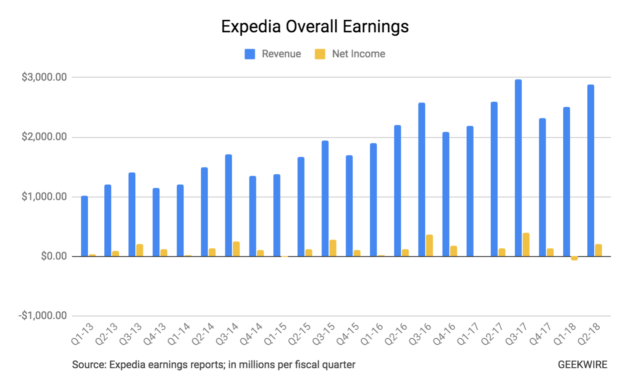 The company’s flagship Expedia online travel brand had $2.25 billion in revenue, an increase of 12 percent. Vacation rental company HomeAway, the Airbnb rival that Expedia acquired in 2015, posted $297 million in revenue, up 32 percent, despite a slowdown in bookings growth. 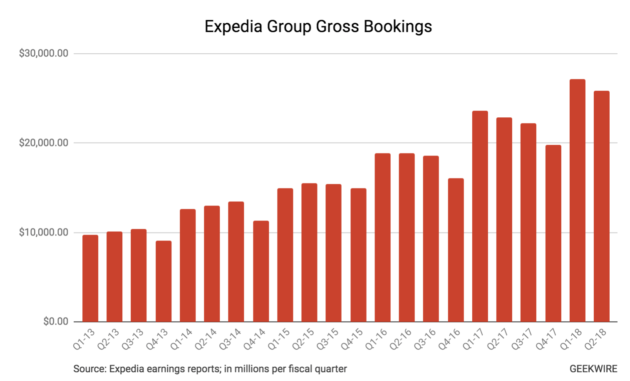 And with new leadership came small changes. In March, Expedia Inc. became Expedia Group, to reflect the global nature of the business, Okerstrom said in a statement at the time of the change.

“Although it’s still early days in our transformation, I’m pleased to say we’re making great strides along our new path,” Okerstrom said in the earnings call. “Looking forward, though our industry remains highly dynamic, we are increasingly confident in our execution capabilities and are optimistic about the opportunities they can unlock for us in this one $1.6 trillion market.”