This week, millions of Americans will gather around their turkeys, enjoy some sausage-filled stuffing, and pies filled with butter for Thanksgiving. It’s almost impossible to imagine a world without consuming animals or their byproducts, but it’s not only more than possible. It could be delicious.

If you’re already groaning, “not another vegan diatribe,” think again. The End of Animal Farming: How Scientists, Entrepreneurs, and Activists Are Building an Animal-Free Food System goes straight to the science of why we need to think collectively on a global scale about improving our inefficient, polluting, and yes, inhumane, food systems that depend on animals. 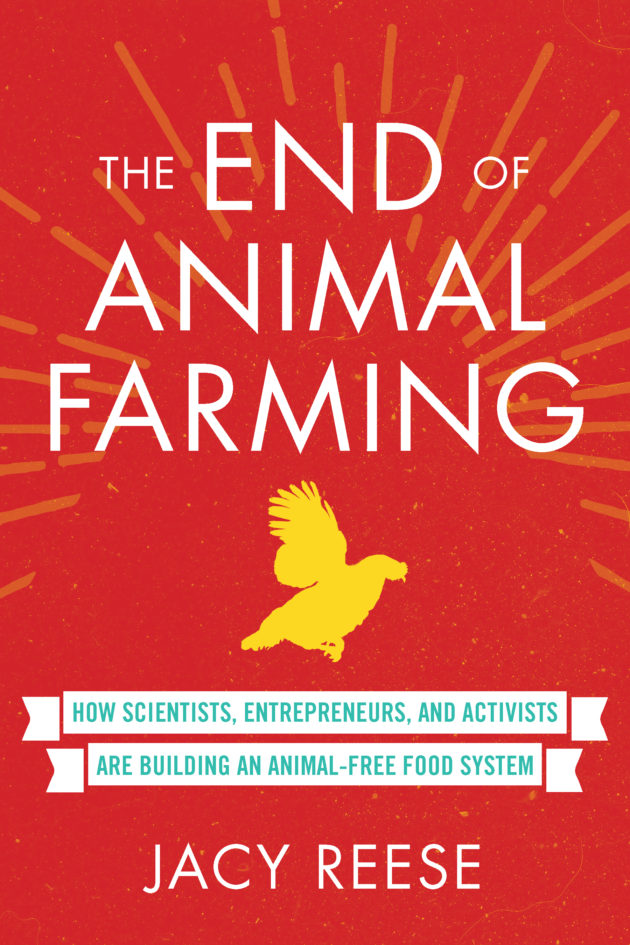 While veganism has long been seen as a lifestyle choice — and a monastic one at that — that deprives us of our delicious hamburgers and ice cream, the science going into developing new food sources will not only make veganism an attractive option, it will be one that makes better sense for everyone.

Jacy Reese is the research director and cofounder of the Sentience Institute, a non-profit think tank that researches effective strategies for expanding our moral circle. He’s also a vegan who grew up in the meat-loving culture of rural Texas. He writes that our current food systems based on animals are inefficient at best, as the amount of calories that go into making a unit of animal protein is incredibly wasteful. Furthermore, what we can even farm with animals is far from adequate to feed our growing global population. If we are to survive and thrive, we must pivot to a system less dependent on animals.

In an interview with GeekWire, Reese talked in detail about his book, which provides a common-sense look at why animal production is failing us, and the entrepreneurs who are disrupting this market. Bill Gates has backed two companies in this field: Impossible Foods (home of the plant-based burger that “bleeds”); and Beyond Meat, which just filed for a $100 million IPO. Another innovator is Seattle Food Tech, which is remaking chicken nuggets into something a lot healthier.

Many tech leaders have taken interest in the quest for animal-free food. Can you speak a bit about why they have been the earliest advocates for change, and why they are best suited to lead the charge?

It’s actually taken a while to get them on board. In the late 1900s, we saw rising meat consumption and the switch of factory farming — over 99 percent of U.S.-farmed animals now live on Concentrated Animal Feeding Operations. But the retaliation was mostly just animal rights and environmental activists. The focus back then was primarily on moral persuasion and individual diet change, convincing people that animals matter and that you should stop eating them.

In the past decade, activists and environmentalists have realized that we need more than ethical motivation to change behavior. The average consumer just sees it as prohibitively difficult to switch from cheeseburgers to beans and rice, no matter how good the ethical or health arguments are.

So those activists have seeded this new animal-free food industry, including entrepreneurs like Ethan Brown of Beyond Meat and investors like the so-called “vegan mafia.” We have a latent demand for animal-free food, and thanks to the hard work of these forerunners, tech leaders now see that they can capitalize on this momentum, even if their only goal is to make money.

With all the advancements made (meatless meat that “bleeds,” egg-free mayo, etc.), can you talk about the most effective next steps to get animal-free products more widely accepted?

Over the next decade or so, I expect two fronts: First, the sophisticated plant-based products like the Impossible Burger will scale up. This means getting more production facilities, more retailers including these options, and perhaps most important, the price reduction that comes from economies of scale. In fact, animals are inherently inefficient. It takes around 10 calories of plant-based food to get one calorie of meat. So in the long run, this new generation of plant-based “meat” should get even cheaper than the animal-based alternatives. This will be especially important in food service, such as college cafeterias that can easily switch to these new foods.

Second, you still have a lot of behind the scenes R&D necessary for some of these products, mainly cultured meat, which is real meat made from animal cells without animal slaughter. By growing cells outside of an animal, you get exactly the product people want, but without all of the ethical and food safety costs. That’s why this product is sometimes referred to as “clean meat.” In the next few years, I’d bet that these products will only be sold in high-end restaurants and retailers as scientists continue to refine the technology.

Can you give us an update on the progress with big agriculture and industrial food companies looking to animal-free options?

Historically, vegans and animal rights activists thought we would need to take down all of these companies. Meat is over $1 trillion globally, and that was a truly epic goal. But now it looks like the meat industry will just pivot from an animal-based to an animal-free supply chain.

Are there Pacific Northwest companies making impressive strides toward animal-free food you see as emerging leaders in this market?

Actually, the most exciting plant-based meat company you haven’t yet heard of is in Seattle! They’re called Seattle Food Tech, and their current focus is making chicken nuggets for food service companies.

There’s a lot of hype around the “bleeding” veggie burgers or “lab-grown” meat, but really a far more impactful target right now — from a business and ethical perspective — might just be replacing the billions of chicken nuggets we mindlessly consume. Chicken nuggets are much easier to mimic than a burger or steak. If they taste the same, cook the same, have better ethics and nutrition, and can undercut the price of animal products due to the efficiency of plants, then switching is really a no-brainer for cafeteria managers.

Can you update us on Brazil, China, and India. Do they seem intent on following our factory-farmed animal path, or do you see a lot of positive signs that they are changing their food systems to align with an animal-free movement more quickly than the U.S.?

Brazil, China, and India each have a lot of similarities to the North American and European markets a decade ago. You have growing consumer interest and some specialty vegan companies with products that are high-end, organic, local, artisan, superfood, etc.

But you’re now seeing more progress in shifting the economic masses toward plant-based. Fortunately, these countries can utilize the infrastructure built in the West and learn from our mistakes. For example, if the Chinese government decides to invest in clean meat, they could very quickly become the global leader of the coming decades.

What isn’t in the book, but is emerging as exciting new developments you’ve seen recently?

A lot of discussion this year has been about the U.S. regulatory environment, especially the potentially competing interests of the USDA, FDA, animal-free food producers, and animal-based food producers. It’s still unclear how this will turn out, but I’ve heard rhetoric from both agencies that suggests they want to foster innovation rather than stifle it. USDA Secretary Sonny Perdue recently said he wants the U.S. to be No. 1 in cellular agriculture and is open to the idea of having the U.S. government invest in research, which was surprisingly positive even to me!

I also didn’t want the book to spend too much time on the current state of the movement, whether that’s the latest start-up to get funding or the latest celebrity to go vegan. Those are important as examples, but my optimism for the end of animal farming relies on much broader trends. There’s the expanding moral circle that we research at Sentience Institute, which has helped humanity build a society that — much more than it did 500 years ago — considers the interests of all humans and now many nonhuman animals.

There’s the sheer inefficiency of animal agriculture, which compels the end of animal farming even if it’s just out of our self-interest. The book is about social and technological change that will be a defining transition of the 21st century, in which 2018 is just one exciting year.

The End of Animal Farming is available now.