DNA evidence and lots of detective work have revealed the networks behind illegal trade in African elephant ivory, centering on three smuggling cartels in Kenya, Uganda and Togo.

The case is laid out in a paper written by a team led by Samuel Wasser, head of the University of Washington’s Center for Conservation Biology, and published today in the open-access journal Science Advances.

Wasser said the findings could figure in a complex case centering on Feisal Mohamed Ali, a reputed ivory kingpin based in Mombasa, Kenya. Feisal was convicted on trafficking charges in 2016 but was set free last month on appeal, due to problems with the evidence that was at hand for the trial.

“Our hope is that the data presented in this paper, and discovered by others, can help strengthen the case against this cartel, and tie Feisal and his co-conspirators to multiple large ivory seizures,” he said.

In addition to the Mombasa cartel, the DNA evidence points to Entebbe in Uganda and Lome in Togo as centers of the illegal African ivory trade.

The stakes are high in the fight against ivory smugglers: Previous surveys suggest that 40,000 African elephants are killed every year, primarily for their tusks. At that rate, Africa’s elephant population, currently estimated at 415,000, could go extinct in a decade.

Illegal ivory trade is thought to amount to as much as $4 billion a year.

“We think there may be investors buying these large whole tusks and keeping them, thinking they may become marketable again,” Wasser said. “Maybe they think elephants will go extinct, and by stockpiling, they are essentially hoarding a potentially highly valuable investment.”

“If you want to cut your teeth on being a transnational organized criminal, start with wildlife and learn the ropes, because it’s a fairly low-risk endeavor and you can move into higher-paying traffic,” Wasser said.

Poachers and smugglers go to extraordinary lengths to cover their tracks: The tusks move quickly through a shadowy distribution system, where paperwork is altered and destinations are intentionally misreported. Cut-up chunks of ivory are often surreptitiously mixed in with other cargo and then dumped into shipping containers.

Even when the ivory is seized, it’s virtually impossible to trace the contraband back to its point of origin by traditional means. That’s where DNA plays a role.

Over the course of decades, Wasser and his colleagues at the Center for Conservation Biology have sampled elephant dung from across Africa, extracted DNA from cells passed along in the poop, and created a map linking DNA signatures to geographical locations.

His research group and officials from the U.S. Department of Homeland Security have been working with agencies in Africa’s ivory hotspots to check the database against DNA from seized ivory shipments.

Only a fraction of the tusks in a seized shipment can be sampled, due to the cost of testing (about $110 per test). Nevertheless, the analysis is capable of determining where the tusks came from, and matching up one elephant tusk to its mate — even if they’re shipped in different directions.

Wasser’s technique was described in a paper published in 2015. For the newly reported research, the technique found links between 11 out of 38 large ivory shipments by identifying tusks that were separated after poaching but shipped out of the same port between 2011 and 2014. 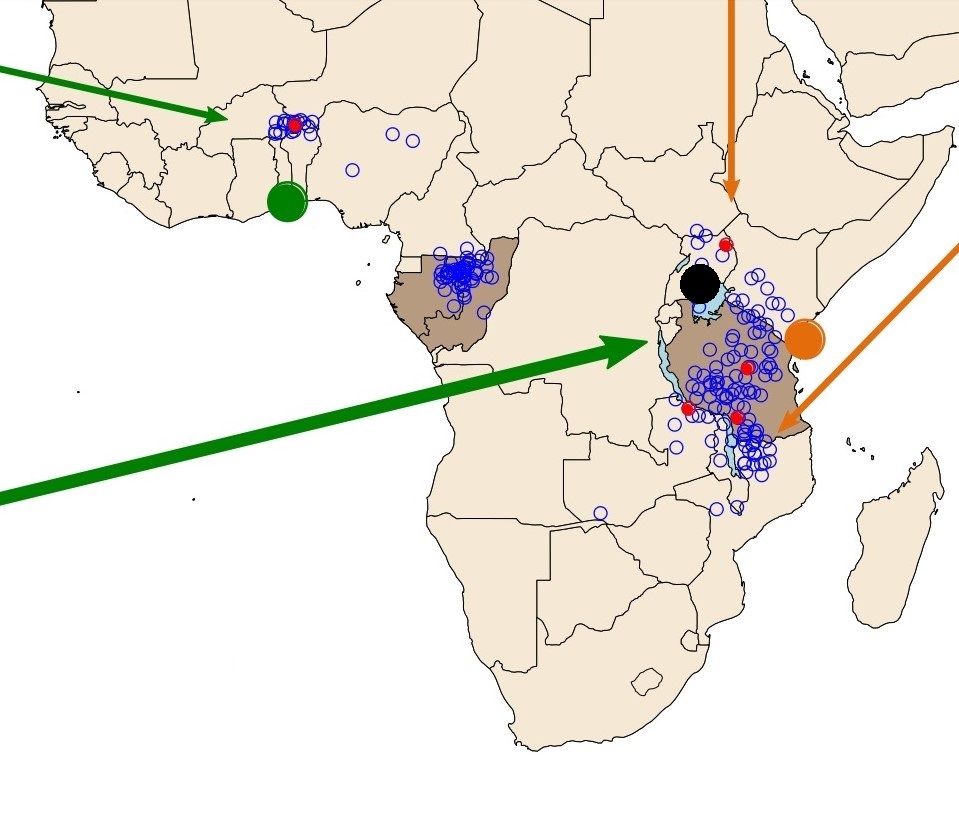 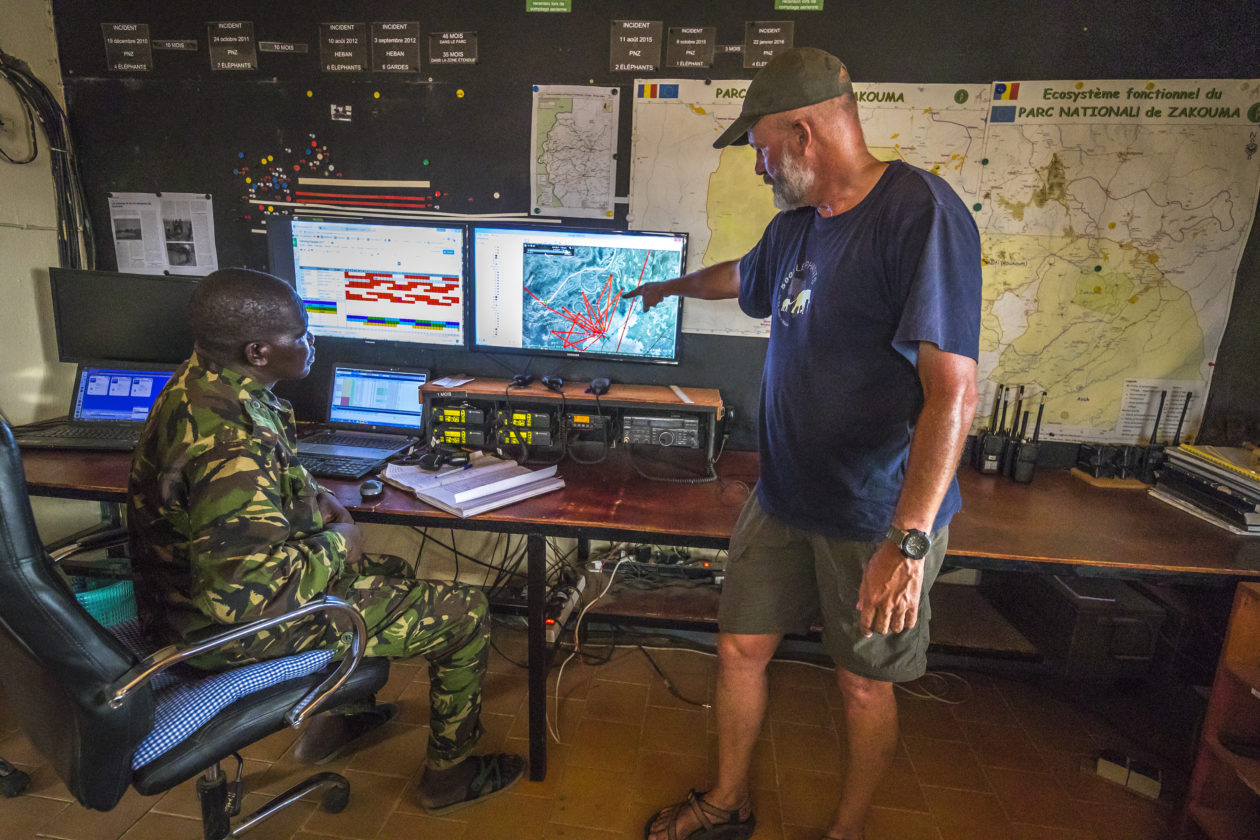 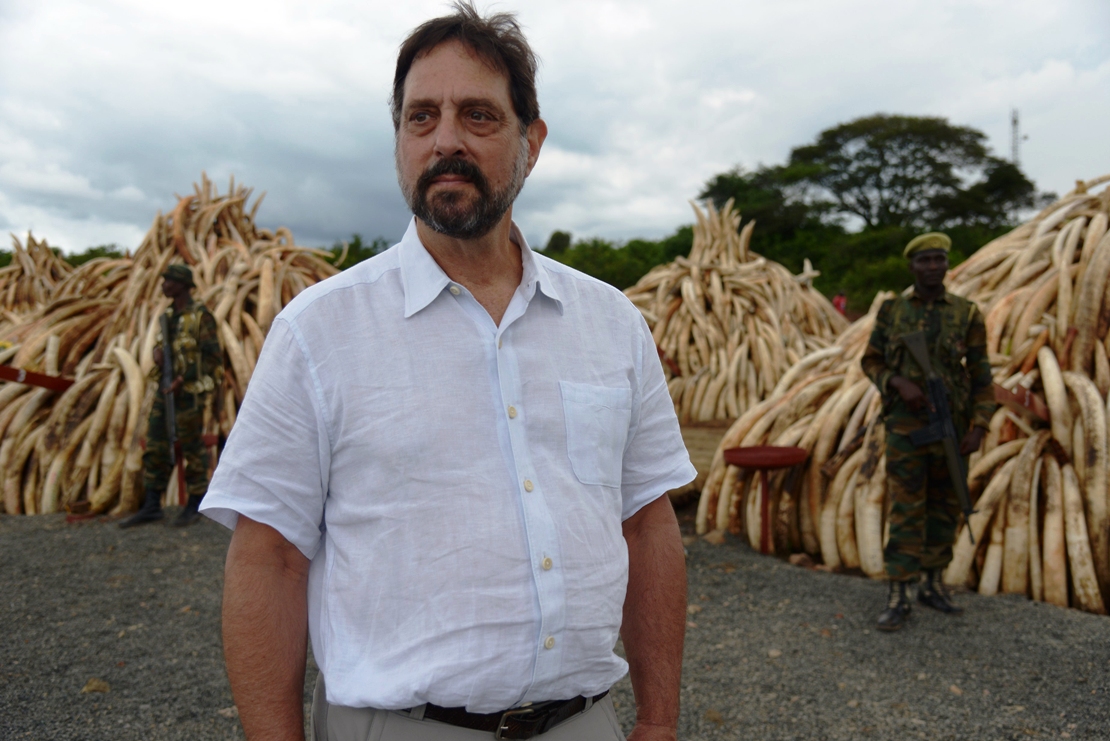 Some of the thousands of tusks set ablaze in Kenya in April 2016 were sampled for forsnsic analysis by Samuel Wasser and his team. (Kate Brooks / The Last Animals) 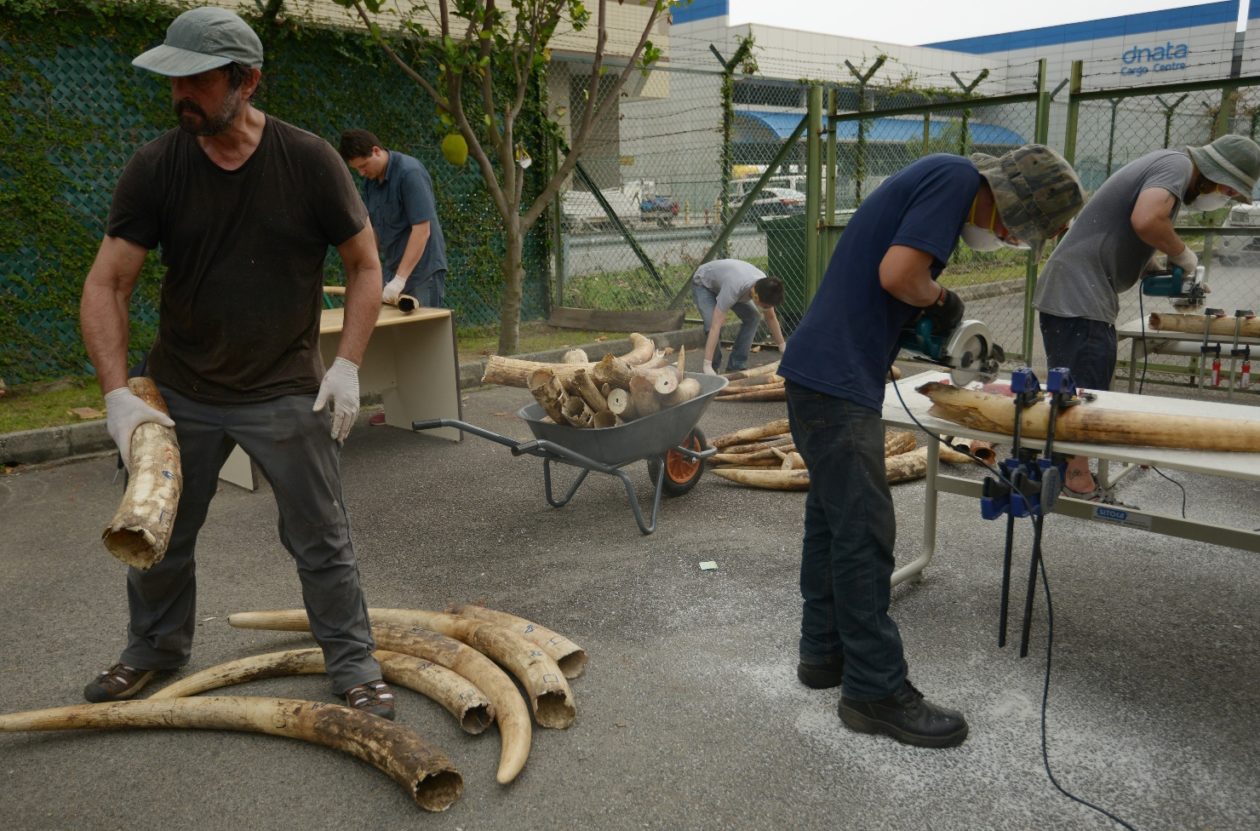 Samuel Wasser and his team do forensic analysis on a 4.6-ton ivory seizure in Singapore in 2015. The containers were being shipped from Mombasa, Kenya to Vietnam. (Kate Brooks/The Last Animals) 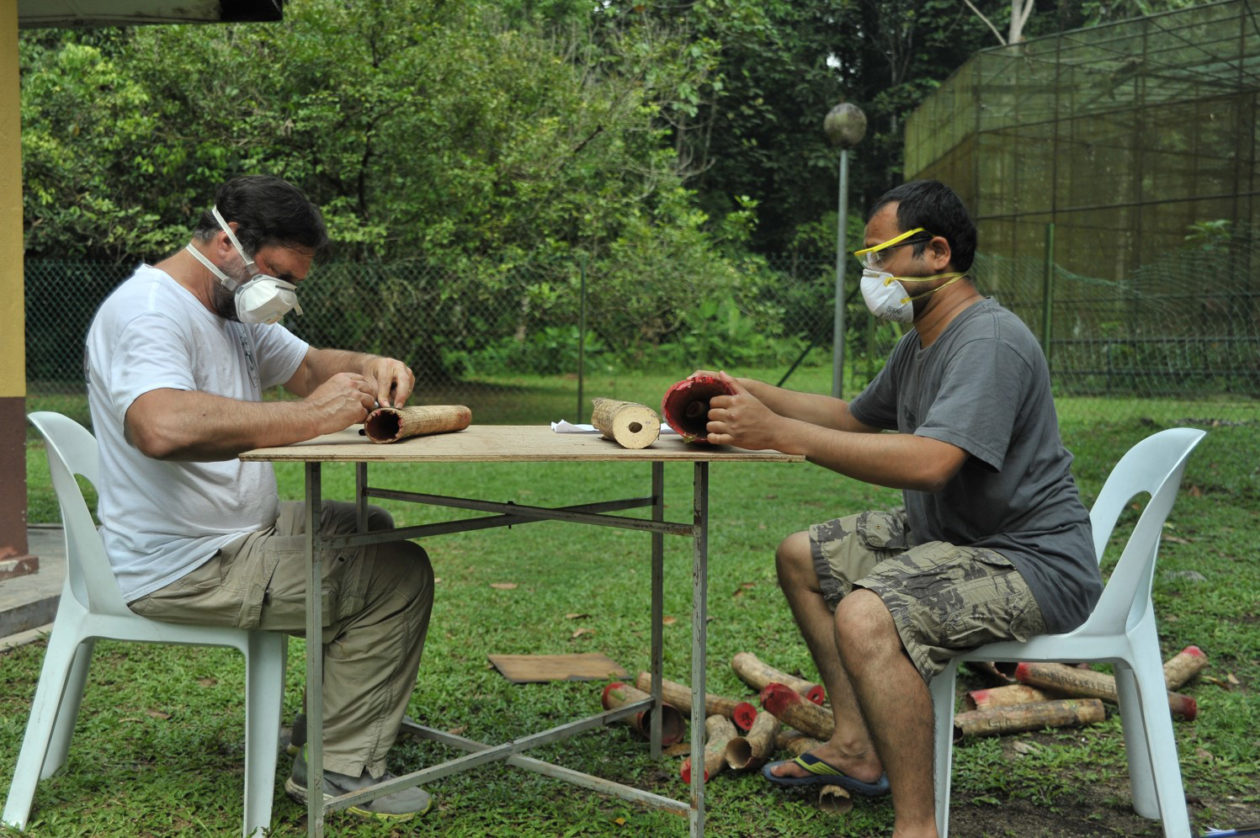 Researchers sample ivory from tusks in Malaysia in 2014. (Malaysia Department of National Parks) 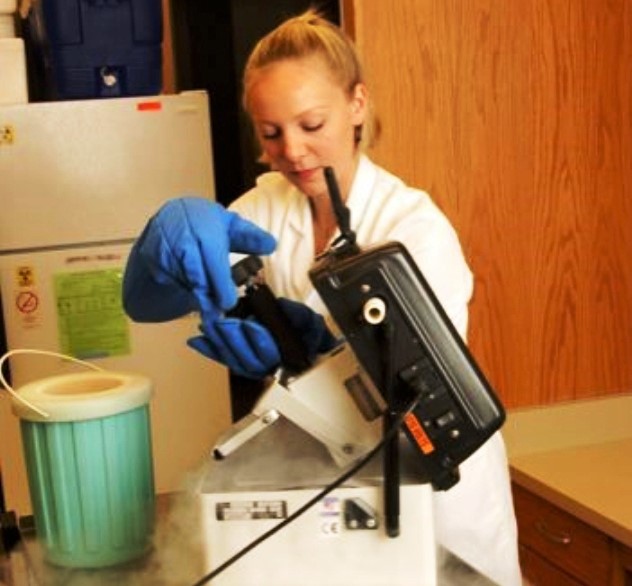 A staff member isolates DNA from tusk samples. Researchers freeze the tusk sample in liquid nitrogen, then use tiny magnets to pulverize the frozen sample, which keeps the DNA from deteriorating. (UW Center for Conservation Biology)

When combined with other forensic evidence, the findings revealed that what might otherwise look like a widely distributed pattern of smuggling actually pointed to Lome, Entebbe and Mombasa, with additional connections linking those cartel centers.

“It provides kind of a roadmap to follow the money,” Wasser said.

John Brown, a special agent in the Department of Homeland Security who investigates illegal ivory traffic, said the DNA links help his team and his partners in African host countries build stronger cases against the kingpins.

“The connection between multiple seizures give us a lot more evidence to look at, and data to mine as far as the financial connections and the financial transactions that took place to facilitate these illegal shipments,” he told reporters.

Feisal isn’t the only target: Authorities already have a good idea who’s in charge of the ivory trade in Togo and Uganda, and the DNA findings are likely to strengthen the eventual cases against those suspects.

And during this week’s teleconference with reporters, Wasser asked Brown whether he wanted to discuss the case of a target he referred to only as “you know who.” Brown declined.

Theoretically, the DNA technique applied to elephants and their ivory could be applied to other endangered species as well, such as the anteaters known as pangolins. Pangolin scales have become a valuable commodity for traditional Asian medicine, even though there’s no evidence of a beneficial effect.

Tracking pangolins is trickier, however.

“Pangolin scat is a little harder to find, because [a pile of] elephant dung can weigh about 25 pounds but pangolin scat is very small,” Wasser said. “And so we’ve trained detection dogs to be able to locate those samples across Asia and Africa where the pangolins occur.”

The same goes for whales. Believe it or not, Wasser’s team has trained dogs to pick up the scent of whale scat from as much as a mile. The poop-sniffing, boat-riding pooches came into play for a killer whale study published last year. With proper training, dogs could help scientists tackle the issue of illegal whaling as well.

“The big problem is that this work is not cheap,” Wasser said. “It’s not cheap, and it’s very, very politically intensive to get countries to participate, to get people to think that you’re not crazy by what you’re trying to do here, using dung to combat transnational crime. So it’s slow going, but I think that we’re now setting a precedent here.”

The research was funded by the Paul G. Allen Family Foundation, the U.S. Department of State, the U.N. Office of Drugs and Crime, the World Bank, the Woodtiger Fund, the Wildcat Foundation, Interpol, the Bosack Kruger Charitable Foundation, Paul and Yaffa Maritz, the U.S. Fish and Wildlife Service and the National Institute of Justice. The work is discussed in a University of Washington news release.