Christine Betts sometimes feels overwhelmed because she “only started programming in college” but a glance at her long list of accomplishments shows the college junior is miles ahead of many people well into their careers.

She graduated high school in a rural suburb of Kansas City, Mo., and took a gap year to figure out what she wanted to do. Rather than spending it traveling through Europe or hitting the East Coast music festival circuit, Betts was a Congressional intern in Washington, D.C., and held a variety of part-time jobs, including a gig as a baker’s apprentice and coaching low-income girls.

Betts was accepted into the University of Washington’s School of Computer Science and Engineering and Tune House, a two-year scholarship program run by the Seattle mobile marketing analytics startup. Tune Scholars receive free housing and mentorship.

The accolades don’t end there. Betts this week was named the recipient of the inaugural Allen Institute for Artificial Intelligence Outstanding Software Engineer scholarship and internship for women and underrepresented minorities. She spent the past summer working as an engineering intern for Google and this upcoming summer she plans to intern for Facebook before entering her senior year.

If your resume is starting to feel a little flimsy by comparison, you may not want to read on. Betts recently took an undergraduate research assistant position working on “a microfluidics lab-on-a-chip project” at the UW’s Molecular Information Systems Lab. Betts spent two of her quarters in college as a teaching assistant for an intro programming course. She also volunteers with Seattle’s Big Brothers, Big Sisters chapter.

“Education is particularly important to me and I find fulfillment in sharing my time and knowledge with others,” Betts said.

Continue reading to learn more about this week’s Geek of the Week, Christine Betts.

What do you do, and why do you do it? “I mostly learn as much as I can about computer science. It’s such a huge field, which can feel a little overwhelming as someone who only started programming in college, but thanks to opportunities to try research and teaching as an undergrad as well as the chance to try working in the industry through internships, I think by the time I graduate next year I’ll have a good idea of what area I like the most.

Now that I’ve started programming, I can’t imagine doing anything else in a career, but more broadly I’m motivated by the voices I hope to lift up in whatever capacity I can. There are so many perspectives that aren’t being heard because of how poorly the field as a whole reflects the larger population, which is why in the future, no matter what I do, I hope to mentor and lift up young women. I think we have an especially long way to go in education to increase the number of women and underrepresented minorities working on lower-level systems.”

What’s the single most important thing people should know about your field? “Programming is a creative endeavor. When I try to convince others to give it a try, I make an effort to emphasize the breadth of applications of computer science and that algorithmic thinking pops up in many areas outside of STEM. I think knitting is a great example. As a knitter, I can pick up a pattern and reuse it, modify it, or create something entirely new within the framework formed by needles and yarn. Pattern recognition and the ability to think at multiple layers of abstraction are integral to both computer science and most creative endeavors. Where I’m planning when to increase stitches to form the thumb part of a mitten when knitting, I’m thinking through loop bounds when programing. These parallels exist in so many areas, and by recognizing that truth, we aren’t lowering any bars, just making sure that people like me who were never the STEM-type but who have a real knack for programming are able to discover that.”

Where do you find your inspiration? “I find inspiration in all of the young women I’ve gotten to work with, the awesome, hard-working and motivated women I get to live with as a TUNE Scholar, and in thinking about how much I have to be grateful for.”

What’s the one piece of technology you couldn’t live without, and why? “A free and open internet! I’m constantly trying to take in and better understand the perspectives and experiences of others, so the ability to read blogs that might not get a ton of traffic and to read news sources from all over the world is very important to me. I also regularly look up programming questions and seek out tutorials for different libraries and languages; it’s amazing how many people want to share their knowledge.”

What’s your workspace like, and why does it work for you? “It’s usually more cluttered than I’d like. My MacBook Pro has been having some hardware issues, so I’ve been using an old keyboard and have yet to get key-mappings all straightened out.” 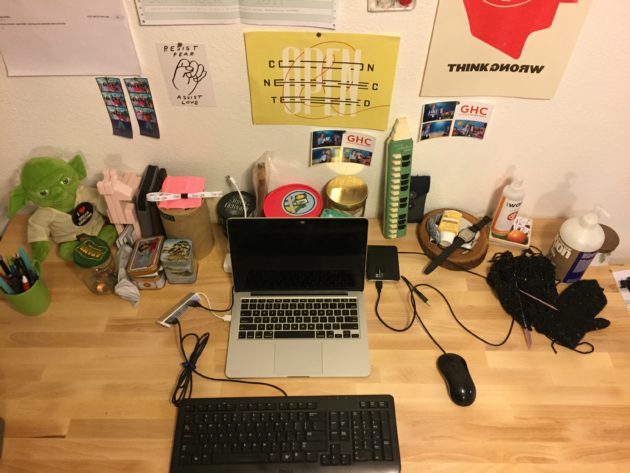 Your best tip or trick for managing everyday work and life. (Help us out, we need it.) Resist the urge to check your phone every single time you have a free minute in the middle of a busy day. Revel in just a tiny bit of peace.

Kirk, Picard, or Janeway? I have no clue. Being a programmer (a geek, even) and enjoying Star Trek are completely independent of one another.

If someone gave me $1 million to launch a startup, I would: “I would start a think tank/lobbying firm focused on researching the effects of innovations that will shape society over the next 10-15 years and lobby for policies that would limit negative effects (or even increase positive ones) on communities that are already struggling.”

I once waited in line for: “A David Sedaris book signing. He looked at my friend and me and said, ‘now what are a couple of young people doing here?’ He then proceeded to pull bottles of lotion and shampoo he’d gotten from hotels out of a bag to give to us. I’ve never used the lotion; he said it was from the Ritz Carlton in Kansas City.”

Your role models: “Maya Shankar, former head of behavioral science at the White House, violin virtuoso, and all around incredible human is probably my biggest role model. I actually got to meet her this summer while at Google and I was so amazed by how warm, down-to-earth and insightful she was. Melinda Gates is someone else I really look up to, both in terms of her technical background as well as her commitment to reducing inequities all over the world.

Some role models from my educational experiences are my high school newspaper teacher, Carol Ullery (who was named one of the Kindest Kansas-Citians), as well as someone I get to work with in the Provost’s office at UW, Katy DeRosier, who has taught me so much about patience, grace, and the fulfillment that comes from believing in others. I’m also really inspired by the work of Stuart Reges and Ed Lazowska in the Allen School. Finally, I look up to my mother because of the challenges she has overcome for both of us and the relentless empathy and compassion I learned from her.”

First Computer: I think the first computer I ever interacted with was my dad’s PC that ran Windows ME. Floppy disks were also a thing.

Favorite Cause: “Any opportunity I have to share my time and knowledge with others, especially with young women from low-income communities or who have grown up in family situations that remind me of my own.”

Most important technology of 2016 CRISPR:

Most important technology of 2018: I wish I knew … currently I’m excited about type inferencing for local variables in the March 2018 Java release.

Final words of advice for your fellow geeks: “As much as I love working in binary (if you shift bits to the left it’ll multiply the number by two), I’ve become very aware of the danger of binaries in our society. There are such massive divisions that have limited the ability for many of us to engage in civil discourse. Instead, our perceptions of those who come from different places than us and who hold different opinions fester and make it easier for us to write them off as ‘others’. For a lot of people, the lifestyle that working in the tech industry is conducive to is one that removes most of the stresses that a lot of folks from all over still have to deal with. Every time I return to where I grew up in the Midwest, I’m reminded of the fact that we really are all just trying to find happiness and prosperity for ourselves and our families, and I have even found some success after engaging in conversations about fundamental beliefs that I hold (and believe that everyone should hold) about equity in our society.

I think stories are what make us different from any technology we could ever imagine; we’re able to communicate abstract thoughts and memories in a way that sometimes, when empathy and compassion are involved, another person can experience what it’s like to be someone else for even a moment. Stories often don’t get enough credit in tech, especially when we consider the larger divisions both geographically and economically between those who are shaping the future of our society and those who will feel the effects of what I envision as a new sociological era with the dawn of ubiquitous artificial intelligence. Whether it’s talking to someone on the bus or asking a slightly-less-surface-level question a party, I think we can all benefit from making more meaningful connections with others.”