Microsoft has so far released its artificial intelligence technologies largely through its well-known software platforms, such as the Cortana voice assistant on Windows 10, automated language translation in Microsoft Office, and AI-powered speech, vision, search and language technologies for developers on Microsoft Azure.

Next up for an AI infusion: Microsoft’s first-party hardware.

Artificial intelligence specialists at the company are now working closely with its devices group, said Harry Shum, the executive vice president of Microsoft’s AI and Research group, in a broader interview with GeekWire about the next phase of the company’s AI initiatives. Without giving details, Shum said he expects some “very, very exciting devices” to result from the work by the company’s AI engineers and devices group.

Shum mentioned this as an aside, not to get the gadget blogs buzzing but to underscore the scope of what Microsoft is trying to do. As part of the massive engineering reorganization announced by CEO Satya Nadella last week, the company is attempting to bring artificial intelligence into everything it does.

It’s a risky move, focusing the company on emerging technologies that could take years to have a major impact on its bottom line. At the same time, the changes in the engineering divisions reduce the role of Windows, the flagship operating system that has padded its profit margins for decades. Windows chief Terry Myerson is leaving Microsoft as part of the reorganization.

Microsoft has the financial resources to play the long game in artificial intelligence, and its focus on the ethics of AI gives it a selling point at a time of growing concern about the use of personal data by tech companies. The company’s strength in enterprise technology also helps, providing an inroad to large companies separate from the consumer market. And even as the company expands its horizons, Windows 10 still has more than 600 million users, providing massive reach.

However, Microsoft is competing for AI talent and attention against other tech giants and startups making their own major investments in artificial intelligence. Unlike Amazon, Apple and Google, Microsoft doesn’t have the advantage of its own smartphone platform or a large base of smart speaker users to help fuel its AI initiatives. 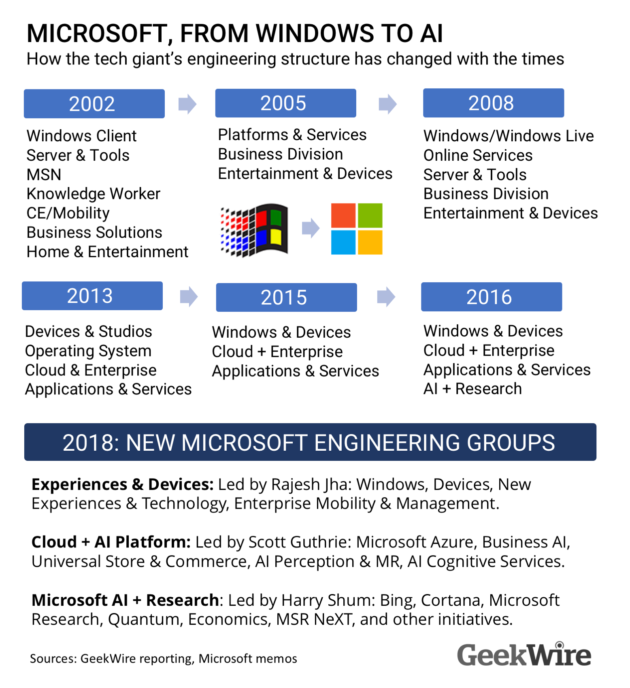 Ultimately, the AI initiative is the biggest test yet of Microsoft’s cultural changes under Nadella. For many years, the rap on Microsoft’s research unit was that its best work too often ended up in papers and presentations, not in actual products. One major goal of the new engineering structure, Shum said, is to get AI out of the labs and into the world at a faster pace.

“It’s not only about winning awards, or about winning ‘best of’ papers,” Shum said. “It’s also about the connection to many millions of customers.”

Microsoft’s AI and Research group was founded 18 months ago, and grew to 8,000 people prior to the reorganization last week. Shum pointed to several signs of progress in the effort to bring AI to market:

Under the new structure announced by Nadella last week, Microsoft’s AI and Research Group is now one of three large engineering divisions inside the company, alongside the Cloud + AI Platform division and the Experiences & Devices division, led by longtime exec Rajesh Jha, which includes Microsoft Office and Windows.

Several groups are moving out of the Microsoft AI and Research Group and into Cloud + AI as part of the reorganization: Cognitive Services, Business AI, AI for Customer Support, and Ambient Intelligence.

Microsoft declined to say how many employees are shifting between the divisions as part of these changes. The teams that develop Cortana and the Bing search engine are still part of AI and Research, along with Microsoft Research and several other groups in areas including quantum technology, economics and MSR NExT.

In addition, Nadella wrote in his memo that Shum and his team will work closely with a new group inside the Cloud + AI division, called AI Perception & Mixed Reality, led by Alex Kipman, the creator of Microsoft Kinect and HoloLens. AI and Research will also still play a role in the cognitive services effort that moved to the cloud group.

Microsoft is taking a stand on AI ethics as part of its effort to differentiate itself from other tech companies in the field. Shum and Brad Smith, Microsoft’s president and chief legal officer, lead an internal Microsoft group called AI and Ethics in Engineering and Research (AETHER).

Asked if recent revelations about Facebook have made things more difficult for Microsoft and other companies that rely on large data sets to fuel their AI and machine learning algorithms, Shum declined to comment on that controversy but pointed to the internal ethics group as an indication of Microsoft’s approach. Over time, he said, he hopes to see the group develop “AI shipping criteria” that the company can use to assess products before they’re released, much as it does accessibility, privacy and security already.

Can Microsoft win in AI? Ultimately, it comes down to a “mindset change across the whole company,” Shum said. “Satya and I keep telling people that AI is not just Harry’s problem. AI is everyone’s problem in Microsoft.”