When NBC News shut down its popular Breaking News website and app in late 2016, the team heard not just from general news consumers but also from disappointed users at big companies and organizations around the globe. They had come to rely on the service for 24/7 real-time news and incident updates to protect employees and assets from threats around the globe.

“These companies were using Breaking News in a way that we really just hadn’t anticipated,” recalled Cory Bergman, who was the Breaking News co-founder and general manager.

That insight was the genesis of Factal, a new Seattle-based startup unveiled today. Factal brings together key players from the former Breaking News team for a new venture — focused on news alerts for corporate users rather than general readers, with a paid subscription model instead of a free service.

Factal was founded by Bergman, vice president of product; Ben Tesch, Factal’s vice president of technology, who was also a Breaking News co-founder; and Factal CEO Charlie Tillinghast, who oversaw the creation of Breaking News as an internal startup when he was president and CEO of MSNBC Interactive, the former Microsoft and NBC News joint venture.

The Factal service is slated to launch in September after more than a year of beta testing. The startup has raised $880,000 of a $1.2 million initial funding round, led by SeaChange, formerly known as Seattle Angel Fund. Seattle-based investment firm Grubstakes and angel investor Dave Smith also participated in the seed round.

Factal uses a news-gathering strategy similar to the one that helped Breaking News attract millions of followers: combining human editors with tech-fueled “signal detection” that includes data from social media and news outlets. But instead of providing information to everyday consumers, Factal is focusing on corporate users who need trusted and verified data about incidents in specific locations that could pose a threat to their workers, facilities and other assets. 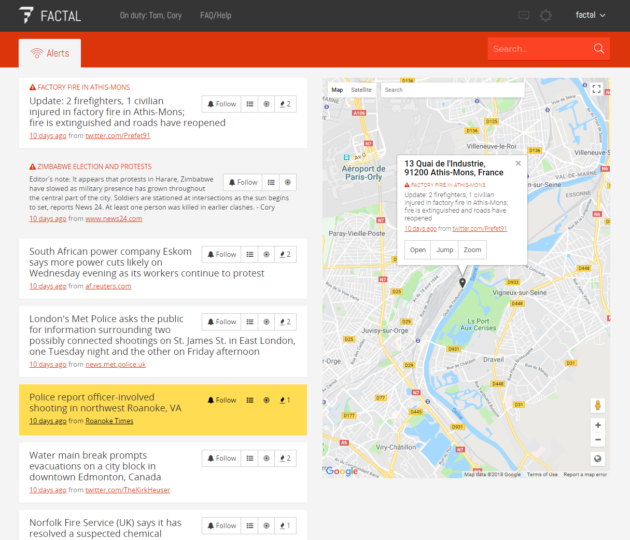 Many companies already have their own analysts who monitor global threats and incidents, but Factal is aiming to be more efficient, accurate and relevant, particularly in a media environment where misinformation can spread quickly. Corporate users say they need this type of service, because “sifting through Twitter is horrible,” Tesch said.

Users can set up custom notifications depending on factors including the location of their facilities and assets. Factal then uses machine learning technology and editors to verify and geo-locate information about everything from wildfires to shootings.

More than 30 Fortune 500 companies have participated in the Factal beta. The Seattle startup plans to generate revenue with a subscription service, but did not provide specific pricing details.

Tillinghast, who was previously CEO of Seattle-based media technology company Mixpo, has led a variety of companies and organizations, but Factal marks his first time working as part of a founding startup team. He said he believes the company will fill an important void.

“It’s not just the value of the information itself, but also the speed at which it is delivered, and the verification,” he said.

Potential use cases go beyond getting simple notifications. Bergman said Factal’s data could ultimately be used to inform algorithms — for example, notifying a self-driving car to avoid dropping off passengers near a wildfire or at an airport with a potential threat.

While Factal is focused on corporate clients initially, it is exploring a potential consumer product that would support its mission of protecting people from harm around the world. Its technology could also be used by large social platforms, Bergman said.

The role of social media in the spread of misinformation has become a key focus in the U.S. in the aftermath of the 2016 elections. Factal focuses on incidents in specific physical locations and doesn’t plan on verifying or fact-checking political news unless it rises to a level that impacts its users.

Competing products include Dataminr, which raised $221 million this summer and has a Seattle office, and NewsGuard.

Breaking News had 9 million Twitter followers and 20 employees when it was shut down by NBC News two years ago. Breaking News was based in the Seattle region, a legacy of the former msnbc.com news operation that was part of Microsoft’s past partnership with NBC News. Three former Breaking News staffers — Jillian Stampher, David Wyllie and Breaking News co-founder Thomas Brew — are now working for Factal, which plans to hire more editors around the world with the fresh funding.