A new software platform incubated inside RealNetworks is aiming to spice up streaming shows and movies with a Twitch-like social interaction layer.

Scener lets people watch Netflix, Hulu, and YouTube with picture-in-picture commentary videos created by other users that play simultaneously with the media. The product launched today as a free Google Chrome extension for laptops and desktops.

Daniel Strickland joined RealNetworks after the Seattle company, best known for pioneering streaming media in the early days of the web, acquired his startup in 2011. He pitched the idea for Scener late last year after watching Game of Thrones with Twitter commentary — a combination he thought should exist all the time, not just during a live airing.

Strickland got approval from RealNetworks executives to incubate Scener. He brought on Joe Braidwood, former vice president of marketing at TraceMe, as co-founder and is working with ten other employees on Scener. 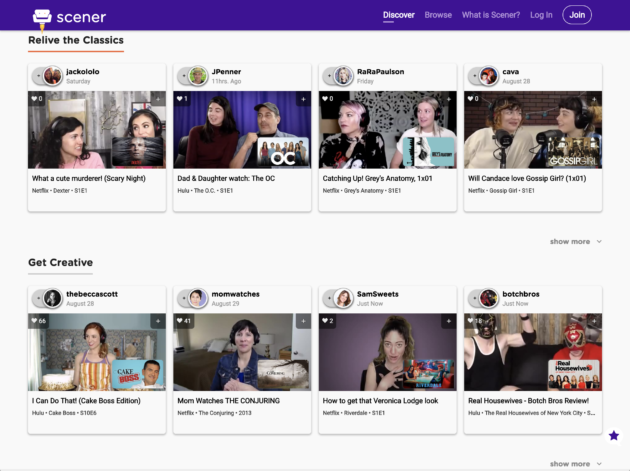 Scener uses publicly-available Chrome APIs and HTML5 video players to sync social commentary with the underlying streaming content, allowing users to watch shows and movies with the picture-in-picture video at any time.

“We spent a lot of time and engineering effort to make sure this was a simple overlay on top of a streaming experience that viewers are used to,” Strickland said. “No one has to learn how to use a new service.”

“Stuff like that with Scener becomes much easier,” he said.

Braidwood also compared Scener to Twitch, the popular Amazon-owned game streaming platform with 15 million daily active users. But Scener is more focused on the entertainment industry, in particular movies and TV shows. It is also launching as more and more people cut the cord, moving from cable to one or more of the streaming services.

“We see that there’s such a new hunger in the market for people to go deeper on the content that they love, whether that’s with ComicCon or VidCon or what we see from Twitch and these empires people are building with their audiences,” Braidwood said. “We felt the real need to bridge that world with something that works with shows and movies we watch everyday.”

Scener doesn’t deal with copyright issues “because there is no copying happening,” Braidwood said.

“The commentary is synced over the top of the underlying content, which can only be watched if someone has a subscription to the relevant premium service,” he said.

Incubating projects is a new concept for publicly-traded RealNetworks, but one that has the support of Rob Glaser, the company’s founder and CEO who is chairman of Scener.

“Over 20 years ago, we at Real revolutionized media by inventing the world’s first commercial internet streaming system,” he said in a statement. “With the launch of Scener, we’re reinventing the streaming experience itself.”

There are 600 videos produced by 200 people at launch. The plan is to spin out Scener and raise outside capital once the platform gains traction, Braidwood said. He added that there are revenue-generating ideas in the works, including monetization abilities for content creators and deals with studios.

RealNetworks was founded in Seattle in 1994 by Glaser, a former Microsoft executive. The company currently develops consumer media services including the RealPlayer video player and RealTimes automatic video-creation technology, as well as mobile technologies and casual games.

Shares of RealNetworks are down slightly over the past year. The company posted revenue of $15.7 million for the second quarter, down from $21.6 million in the year-ago quarter, and a net loss of $0.14 per share. Glaser said “it was a disappointing quarter financially and a strong quarter strategically.” RealNetworks released facial recognition technology to K-12 schools in July.