In the startup world, getting a marketable idea and then getting it to market poses some of the biggest hurdles for most entrepreneurs. But what happens after you actually get that done? And where are you supposed to go from there?

LinkedIn co-founder Reid Hoffman’s latest book, Blitzscaling: The Lightning-Fast Path to Building Massively Valuable Companies, co-written with Chris Yeh, is that master plan to get you from fledgling, struggling company to blowing your competition out of the water and becoming your market’s leader by growing your company at “lightning” speed.

If you’re looking for a fuzzy, story-filled book of hand-holding through your startup’s next stages, this is not it. Blitzscaling is a no-nonsense business book extension of a class that was taught at Stanford about what it took for the world’s largest tech companies to grow fast and become the dominant player in their markets. (Think Google, Amazon, and Facebook.) It’s filled with real-life, ride-or-die choices that some of today’s biggest tech companies have had to face and overcome, including Hoffman’s involvement in helping grow his companies PayPal and LinkedIn. 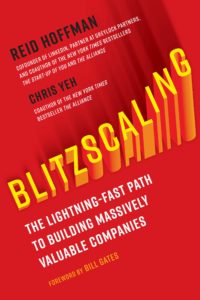 Blitzscaling is also not for people who are risk-averse. Hoffman argues in today’s fast-paced market, you need to be open to abandoning best practices, like solving all problems or putting out all fires, to put on the jet fuel to to accelerate growth: “Blitzscaling is prioritizing speed over efficiency in the face of uncertainty.”

The book opens with Airbnb at a critical moment, when German copycats the Samwer brothers started Airbnb knockoff Wimdu in Europe. Airbnb knew that without Europe it was doomed to fail in the tourism market. Co-founder and CEO Brian Chesky was faced with two options: Play ball with the Samwers by giving them a 25 percent stake in his company. Or blitzscale. Raise tons of capital and fight them in their own market. Risky, but Airbnb prevailed.

And that is the main downside of blitzscaling — increased risk. Hoffman addresses this throughout the book, and how to weigh options. You might go to investors, raise a ton of capital, hire a bunch of people, roll out new products that aren’t quite ready, and still … fail. Blitzscaling requires immense sacrifices. But, as he argues, if your competition is gaining, this may be the best — and the only — tactic you have.

To support his arguments, Hoffman often refers to his Masters of Scale podcast. As a startup founder and current partner in venture capital firm Greylock Partners, he is well-equipped to find the best people to talk openly about their experiences blitzscaling their companies. And just because you’re blitzscaling doesn’t mean you can skip the basics of setting up your business.

Blitzscaling also demonstrates how to successfully scale a company at every stage of growth — and that is essential information for any tech founder or people manager at any stage, whether blitzscaling or not.

The book also revisits the playbooks of Google and Amazon. Google entered a market against another established search giant, Yahoo!, and won by disrupting the ad market with AdWords. Amazon took an aggressive re-investment strategy year-over-year, to the dismay of many who called them out for not being more profitable, to scale quickly and achieve market dominance, especially with Amazon Web Services.

Blitzscaling also demonstrates how to successfully scale a company at every stage of growth — and that is essential information for any tech founder or people manager at any stage, whether blitzscaling or not. Hoffman shares multiple management tactics when it comes to hiring for what you need at the moment (diversity is essential from the start if you want to build a diverse company), knowing when to find new talent, and how to grow a company from a “family” of 10 people to thousands of employees.

As he points out, not only do we need to create more jobs, we need entire new industries — ones that don’t even exist yet — and hundreds, or even thousands, of small startups aren’t going to fill that need. For many companies, blitzscaling will become the only option for survival. The other option? Fade away like a Friendster into that good night.