Original story: Dick’s, Red Mill, Burgermaster, and others take note: Shake Shack is making a serious statement with its debut in Seattle.

The New York-based chain with a cult-like following is set to open this month in the heart of Amazon’s sprawling urban campus. It’s the first Washington-based location for Shake Shack, which launched in 2004 and has more than 180 restaurants worldwide.

GeekWire got a sneak peek — and taste — of the new fast food joint before it opens to the public.

If our dining experience on Thursday and the fervor around Shake Shack’s special preview event this past summer was any indication, the new eatery will surely draw a crowd — especially for any Amazon employees who enjoy a good burger.

“My engineering team is so stoked for this, you don’t even know,” one happy customer said to a Shake Shack employee during our visit.

Those familiar with Shake Shack will recognize the green logo and staples such as the classic ShackBurger and crinkle-cut fries. But what sets this location apart from fellow Shake Shack locations — and perhaps other top Seattle burger spots — is the Montlake Double Cut.

Priced at $10.99, the mouth-watering double-patty delight is a beautiful beast of a burger that features local ingredients, all the way down to the fresh ground meat. For the first time, Shake Shack is sourcing beef from a local farm, thanks to some help from a Seattle startup.

Founded in 2015 by veteran tech entrepreneurs Ethan Lowry and Joe Heitzeberg, Crowd Cow is a digital butcher platform that aims to change how people shop for quality beef products. It lets meat lovers choose beef varieties and cuts and help crowdfund a sustainably-raised animal from independent ranchers. The 30-person company is backed by investors such as Ashton Kutcher, Joe Montana, Madrona Venture Group, and Guy Oseary’s Sound Ventures. It also won the Startup of the Year Award at the 2018 GeekWire Awards.

Related: We bite into a Crowd Cow burger as the startup eyes big growth

“Shake Shack knows all about excellent burgers, and they really understand the difference great ingredients make,” Lowry said. “We were thrilled they wanted to work with us on this, and create something as decadent and delicious as the Montlake Double Cut.”

Customers will recognize a quality difference after their first bite into this juicy burger. Shake Shack also uses a unique cooking method, smashing a ball of meat on a hot griddle to create a sear.

“This is the only Shake Shack in the world where you can get a special burger using local meat, local bun, and a local cheese,” said Mark Rosati, culinary director at Shake Shack. “This is a game changer for us.” 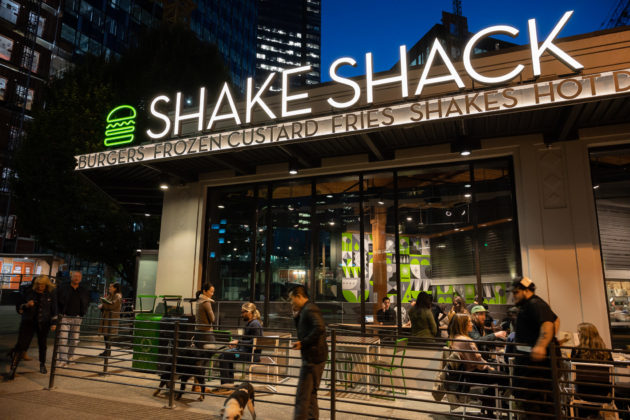 It’s a fantastic concoction that will be made on a limited basis — only 100 will be sold each day. Some of the thousands of blue-badged Amazon employees working in the neighborhood may snag them up each day before dinner patrons have a chance.

One potential downside of the new restaurant is its size. The 3,015 square-foot space, located at a rare standalone building in the heart of Denny Triangle, will surely get cramped during busy hours.

Shake Shack is using technology at a handful of its locations, including Seattle, to get lines moving faster. Customers order at one of seven tablet kiosks that, based on my experience, offer a slick and easy ordering process with nice photos and simple navigation. A text message notifies you that the food is ready. There is one cashier available for those that want to pay with cash.

On the company’s earnings call this past July, Shake Shack CEO Randy Garutti said the kiosks are a way to reduce payroll costs, particularly in markets that have high labor costs. But he added that “what really we’re trying to do with the kiosks is make sure our guests love it.”

Shake Shack also plans to launch its mobile app for the Seattle location. The app, which debuted 18 months ago, lets customers order ahead and pick up their food at the time of arrival, similar to technology being developed by other companies including Starbucks and McDonalds. Garuitti said Shake Shack will also offer a browser-based option for ordering later this year.

The Seattle location originally was set to open the weekend of Oct. 6, but got pushed to Oct. 11. It’s located at 2115 Westlake Ave. and will be open from 11 a.m. to 10 p.m. Sunday through Thursday, and until 11 p.m. on Friday and Saturday.