The tech company posted $53.3 billion in third-quarter revenue, up 17 percent from the same quarter last year. Prior to the earnings release, CNBC said that Apple could be spared the bloodbath due to its profitable hardware business, which online consumer companies like Facebook, Twitter, and Netflix lack.

“Today we’re proud to report our best June quarter revenue and earnings ever, thanks to the strong performance of iPhones, services, and wearables,” Apple CEO Tim Cook said in the earnings call.

Apple also posted earnings per share of $2.34, up 40 percent from last year and beating expectations of $2.18.

Analysts were also watching for any indication of a new iPhone launch come fall, according to CNN. There are already rumors of three new models this fall, though the company is known to be reticent about upcoming releases. Apple is forecasting a revenue guidance of between $60 and $62 billion in the fourth quarter, which is slightly above analyst estimates of $59.57 billion in the next quarter. This guidance could be a signal that the company is gearing up to release new iPhone models.

In the earnings call, Apple CFO Luca Maestri said that the growth in revenue guidance is expected to come from growth in the iPhone, wearables, and services divisions. 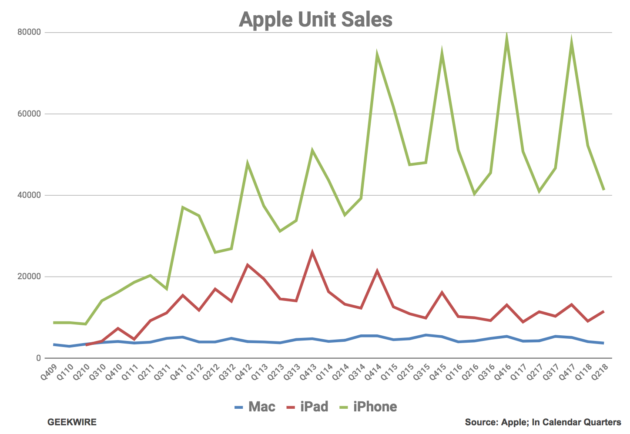 But Apple missed expectations for iPhone sales with 41.3 million units sold in the last quarter. According to CNN, analysts expected Apple to sell almost 42 million iPhones, less than last quarter, as a result of users already owning the newest models or waiting for newer ones. In the earnings call, Cook said that the iPhone X was the most popular iPhone in the quarter.

As for other hardware, Apple sold 11,553 iPads and 3,720 Macs. The company also posted $9.5 billion in services revenue, up 31 percent from the same quarter last year.

“We feel great about the momentum of our services business, and we’re on target to reach our goal of doubling our fiscal 2016 services revenue by 2020,” Cook said.