That’s a turnabout from the broad strokes of White House policy, which has tried to downplay Earth observation and talk up the idea of sending Americans to the moon and Mars.

Despite that dissonance, NASA Administrator Jim Bridenstine welcomed the findings from Pew Research Center’s survey. When reporters told him that 63 percent said monitoring key parts of Earth’s climate system should be a top priority for NASA, Bridenstine reportedly answered, “Good.”

Bridenstine has said that his views have evolved over the past few years, and that he now accepts the scientific consensus that human activity plays the leading role in climate change.

Today he said NASA should play a leading role in teasing out the details of climate science.  “I think NASA can lead when it comes to studying the Earth and studying the climate,” Space Policy Online quoted him as saying. “That’s what we have been doing, and that’s what we intend to keep doing.”

Earlier this year, the Trump administration had proposed canceling high-profile Earth science missions, including PACE, OCO-3, CLARREO-Pathfinder and DSCOVR. But Bridenstine said those missions “could all end up in very good shape.”

“We’re going forth with missions that are going to do carbon monitoring,” The Associated Press quoted him as saying. “We’re committed to that.”

However, Bridenstine emphasized that climate science shouldn’t be the only priority. “I do think it’s important for NASA to continue its other missions as well,” The Verge quoted him as saying. 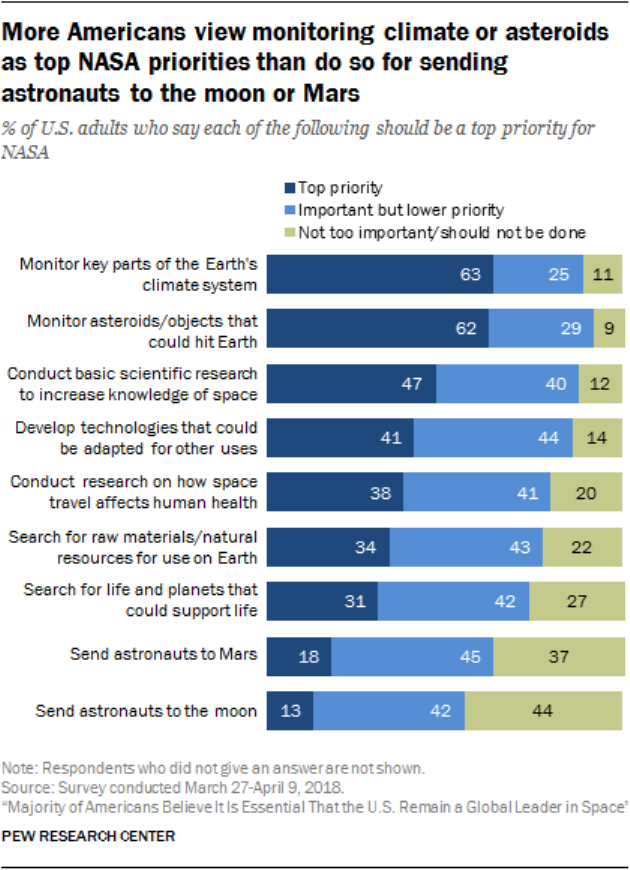 The White House and its National Space Council has turned the near-term focus of NASA’s space exploration program from asteroids to the moon, with Mars exploration and settlement as a long-term goal for the 2030s. However, 62 percent of the Pew survey’s respondents said NASA’s top priorities should include monitoring asteroids and the potential threats they pose to Earth. That’s nearly as high as the support level for climate monitoring.

In comparison, only 13 percent of those surveyed said sending astronauts to the moon should be a top priority, and 18 percent put a high priority on trips to Mars.

On the issue of space commercialization, 44 percent said they had a great deal of confidence that private space companies such as SpaceX, Blue Origin and Virgin Galactic will be profitable. But only a third of those surveyed said those companies will be able to take on space exploration without NASA’s help. Nearly two-thirds said it’s essential for NASA to stay involved.

Most of the respondents said they wouldn’t want to go into orbit (58 to 42 percent). Younger Americans voiced more interest than older Americans: Among millennials (born 1981 to 1996), 63 percent said they were definitely or probably interested in space tourism. The comparable number for those born in 1964 or earlier was 27 percent.

Seventy-two percent of the respondents said it’s essential for the U.S. to continue as a world leader in space exploration, and 80 percent said the International Space Station has been a good investment. 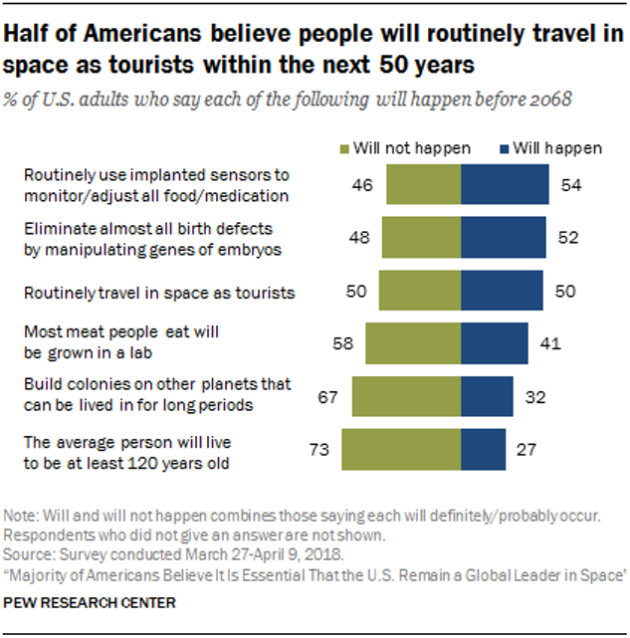 The Pew Research Center’s survey on attitudes toward space exploration was conducted between March 27 and April 9 as part of a larger project known as the American Trends Panel.

The 2,541 randomly selected panel participants were recruited from several large, national landline and cellphone surveys conducted in English and Spanish. Panelists took monthly self-administered Web surveys, and those who didn’t have internet access were provided with a tablet and a wireless internet connection.

The margin of error for sample-wide results is plus or minus 2.7 percentage points, and higher for subsets of the sample. For details, check Pew’s online explanation of its methodology.