The announcements included refreshed versions of existing devices such as the Echo Dot and Echo Show and new devices focused mostly on home and auto uses. Dave Limp, Amazon senior vice president of devices and services, led the event inside the humid Spheres at its growing Seattle headquarters campus.

Limp started the event by talking about how Amazon is making Alexa more conversational and “approachable,” including its “Follow Up” feature that allows for a series of questions to be asked without having to repeat the wake word. Limp said Alexa will have a new “whisper” feature that lets Alexa play lullabies.

The first device Amazon revealed was a new Echo Dot that has improved sound. It has the same price, $49.99, with pre-orders starting today. Amazon also unveiled a new Echo Plus with improved sound and a new temperature sensor, priced the same at $150. It also has a new feature called “Local Voice Control” that lets users control the device without an internet connection.

The second generation of the Echo Show has been redesigned with a smaller size but larger display. There’s now Skype support for voice calls, along with Silk and Firefox browsers, and integration with Amazon Meal Kits. It’s available next month for the same price, $230.

Amazon upped its sound game today, introducing several complements to its Echo speakers to create an entire Amazon surround system. New devices in this area include the $35 “Echo Input,” that connects to other speakers “Echo Sub,” a $130 subwoofer; “Echo Link,” a $200 amplifier; and “Echo Link Amp,” a $300 amplifier. Amazon also has a new API SDK for multi-room speaker capability. Shares of Sonos are down 4 percent.

Smart home devices were a big part of the presentation. The $60 Alexa-enabled microwave is sure to draw plenty of attention, and the tech giant also put a $30 Echo Wall Clock. Both connect to WiFi, but are not standalone Alexa devices.

Amazon’s former smart home chief Charlie Kindel recently opened up to GeekWire about how hard setting up a smart home has become. Amazon has seemingly recognized this and it emphasized “Frustration Free Setup” at the event. The biggest embodiment of that ethos was the $25 Amazon Smart Plug, which makes it easier to control things like lights with your voice.

We also saw a cameo from Ring, the smart doorbell maker acquired by Amazon earlier this year. Amazon unveiled the “Ring Stick Up Cam” a new Ring camera priced at $180.

Building off the acquisition of Ring, Amazon introduced”Alexa Guard” its new entry in home security. The feature, a new mode for Alexa, can listen for breaking glass and detects smoke or carbon dioxide. There’s also a new Alexa doorbell API.

One surprise device was the Fire TV Recast, a $230 device that pairs with a TV antenna and can air live TV, with a DVR feature that can record shows. It streams to Fire TV, Android, iOS, Echo Show, Sony TV, and Lenovo tablets. 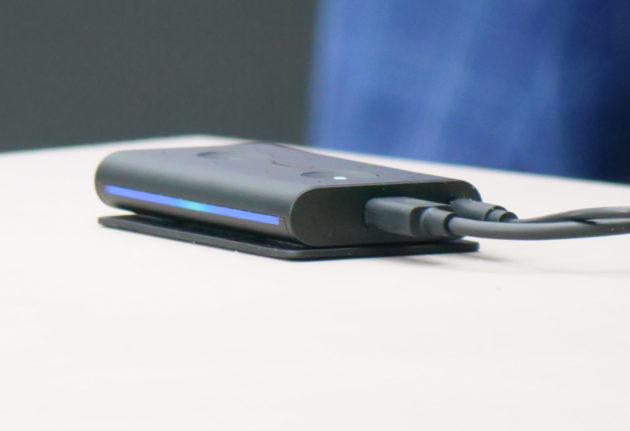 Amazon closed out the event with a discussion of its auto ambitions. Alexa is now built in to the center console displays of several auto makers such as BMW, Toyota and most recently Audi. But these moves only covered brand new cars.

Today, Amazon introduced Alexa Auto, a small $50 Alexa-enabled device designed to sit on a car dashboard. It connects to your phone via bluetooth and brings Alexa into vehicles that don’t have the tech specs to have her built in.

The reveal lost some intrigue after CNBC reported Monday on a new slate of Alexa devices under development. Citing a document describing the plans, CNBC reports that Amazon is preparing to release eight new devices, possibly at today’s event, that can either easily connect to Alexa or already have the digital assistant built in, including a microwave oven, an amplifier, a receiver, a subwoofer and an in-car gadget.

In another hint of what may come out of today’s event, U.K.-based tech site Pocket Lint spotted pages for an Alexa Smart Plug and Echo Sub subwoofer on the tech giant’s U.K. site.

Early fall is the season for tech giants to show off their newest devices in anticipation of the busy holiday shopping season. Last week, Apple showed off the latest iPhone and Apple Watch versions. Microsoft has a devices event scheduled Oct. 2 in New York City, and a week later, Google is expected to unveil the next generation of its Pixel smartphone.

Amazon’s Echo smart speakers have led the way for years, but the market has become much more competitive recently. Amazon’s chief rival Google is gaining ground in the space, and a report out earlier this week found the Google Home Mini was the top selling smart speaker in the second quarter, though Amazon’s devices still outsold Google in aggregate.

It has been nearly a year since Amazon unveiled a major refresh of its Echo lineup, which included the introduction of the Echo Spot alarm-clock style device and the next-generation Echo speaker.