World View Enterprises declared its Tucson headquarters and its hybrid balloon technology to be ready for prime time today, in the wake of a pathfinder mission that captured satellite-type imagery from a stratospheric height of nearly 77,000 feet.

“This technology, sending high-altitude balloons up into the stratosphere, has essentially at this point, with the opening of this building, opened an entire new world of business and aviation,” said former NASA astronaut Mark Kelly, World View’s director of flight crew operations.

World View CEO Jane Poynter said the key to the technology is the ability to control the company’s uncrewed “Stratollites” remotely to make them ascend or descend, hover over one spot for months at a time, or fly on a course around the world.

“That’s really the secret sauce here,” she told reporters today during a teleconference from the company’s Arizona campus.

This month’s pathfinder mission, conducted with Ball Aerospace, sent up sensors that gauged the performance of World View’s Stratollite and captured panchromatic imagery with 5-meter resolution.

“The resolution is good enough to track individual vehicles on the ground,” said Alan Stern, who serves as World View’s chief scientist (as well as the principal investigator for NASA’s New Horizons mission to Pluto and the Kuiper Belt.

At the end of the day’s mission, the solar-powered instrument package sailed back to the ground gracefully, thanks to a remotely steerable parafoil system.

Other ventures, such as JP Aerospace, have been experimenting with near-space stratospheric missions for more than a decade. Hardly a month goes by without an experiment somewhere that puts something interesting on a high-altitude balloon platform.

This is almost a dream boat.

World View, however, aims to take the next step by conducting commercial stratospheric missions on a more or less regular schedule. High winds and bad weather typically rank among the biggest challenges, but World View can deal with those factors due to its Arizona locale, said Taber MacCallum, who is the company’s chief technology officer as well as Poynter’s husband.

“Roughly every week or two, you get a really good window to launch,” MacCallum told GeekWire.

The balloons could also be launched from other sites – for example, to observe hurricanes or wildfires. MacCallum said the most promising locales for future flights include Jacksonville, Florida, and Spaceport America in New Mexico.

Stern said solar-powered Stratollites could be used not only for long-term Earth imaging, weather monitoring and emergency response, but for astronomy as well. At stratospheric heights, cameras could gather infrared observations that would be impossible to get from the ground, he said.

“When you put all that together, this is almost a dream boat,” Stern said.

During the teleconference, Poynter shied away from quoting prices for Stratollite missions, other than to say they would typically cost a tenth as much as an analogous mission using a high-altitude drone, and a tiny fraction of what a satellite mission would cost.

One World View experiment, designed to study methods to control the high-altitude balloon’s altitude, was funded last month by NASA to the tune of $300,000. 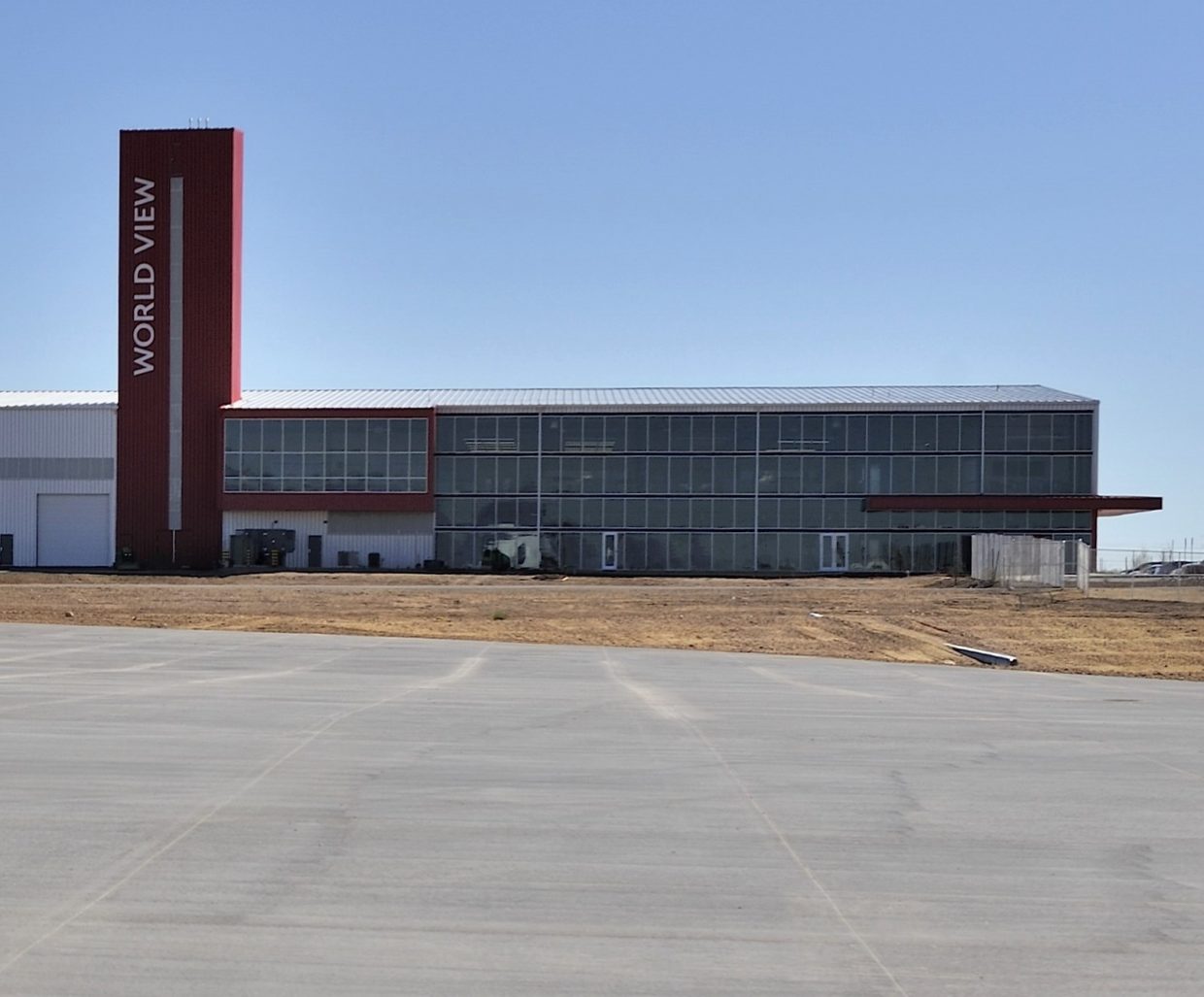 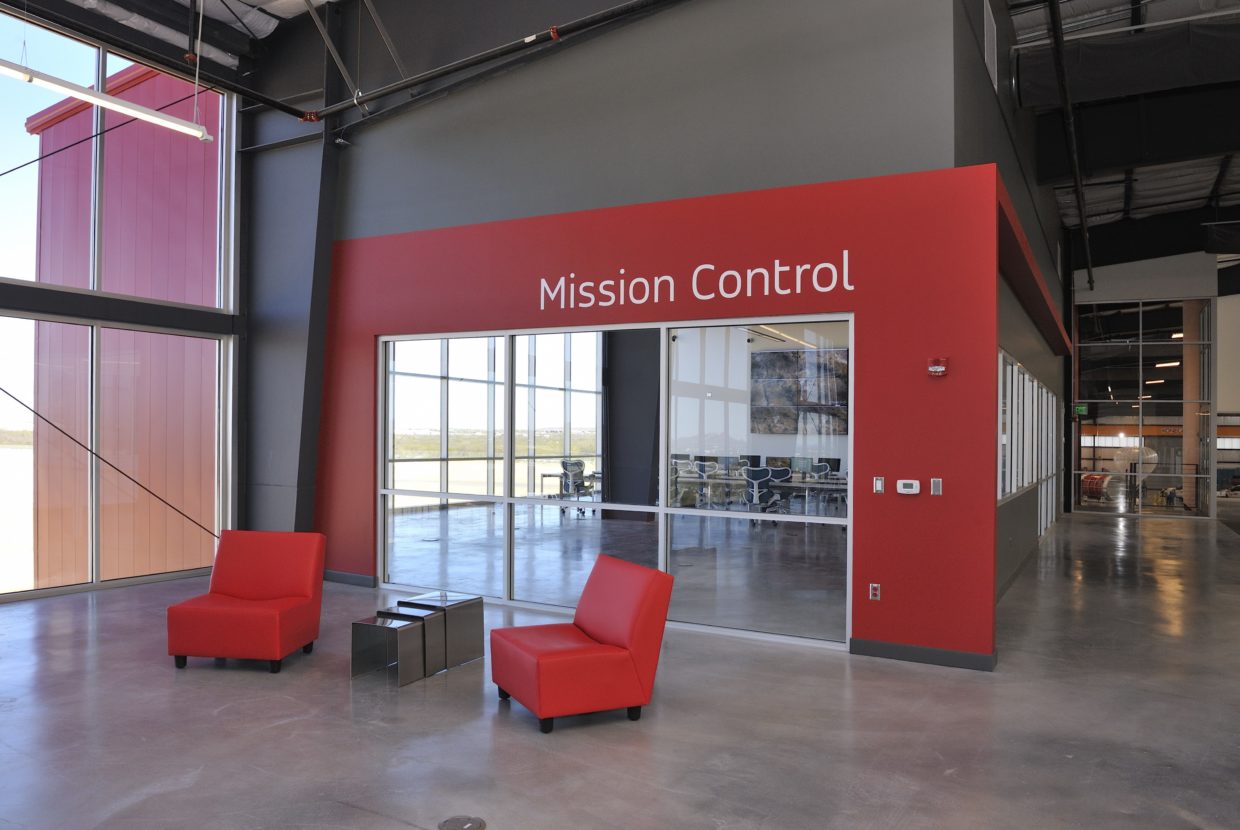 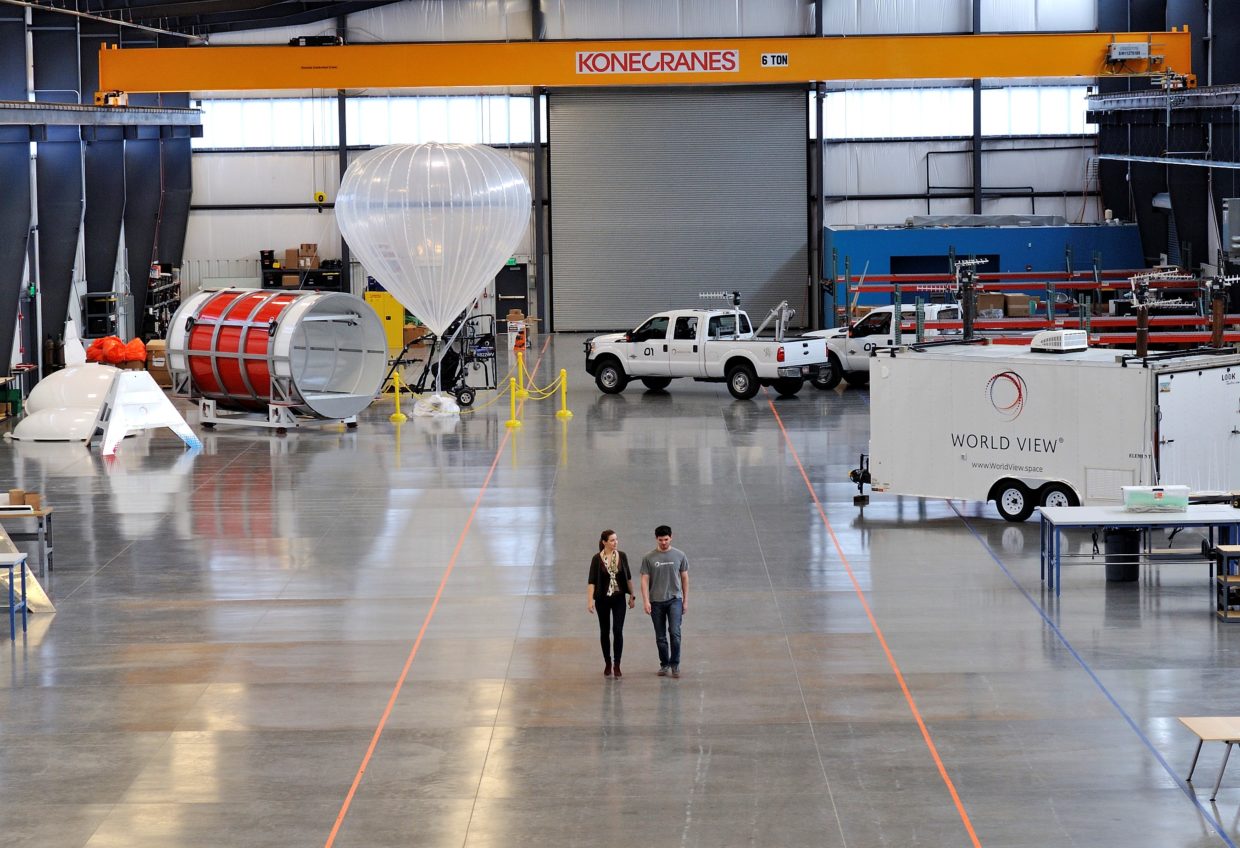 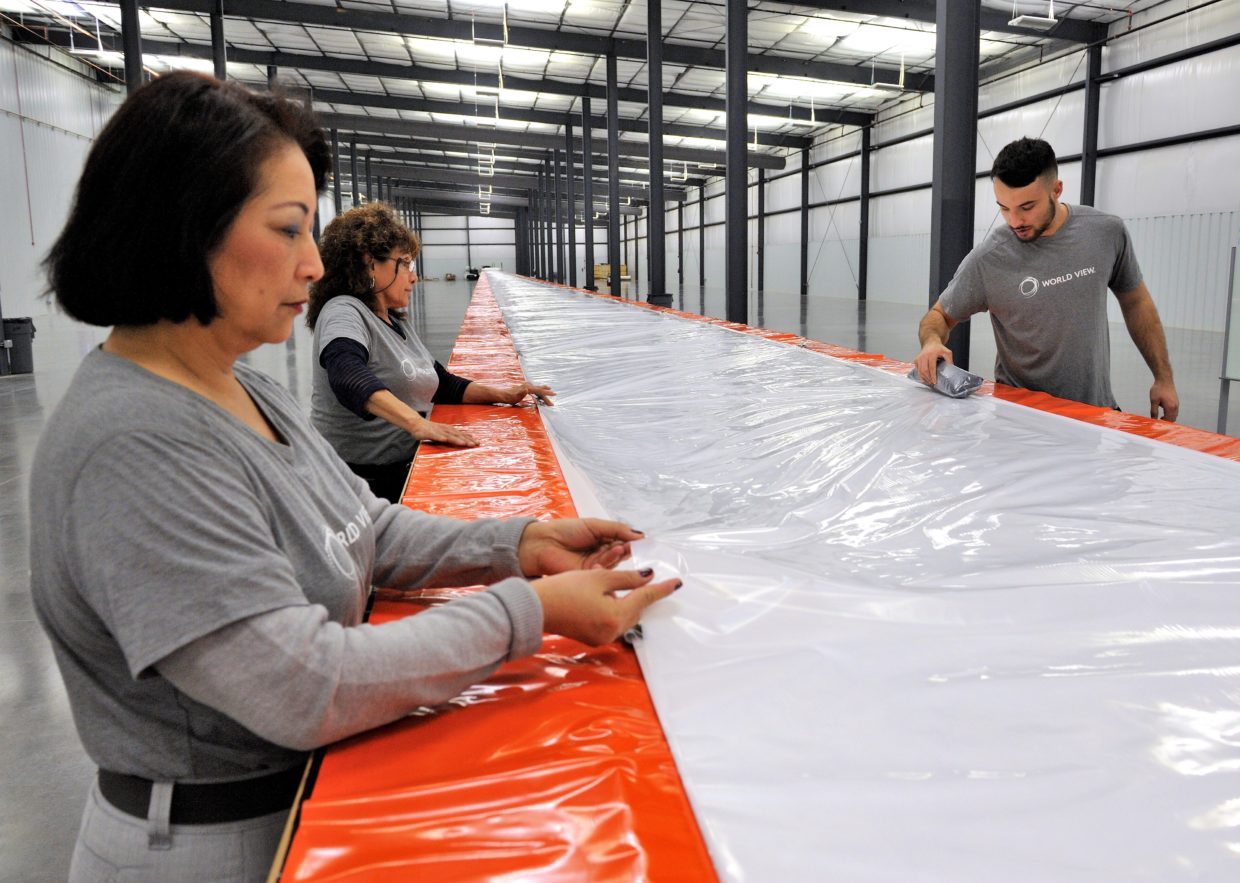 World View’s high-altitude balloons are manufactured on a table that measures a tenth of a mile long. (World View Photo) 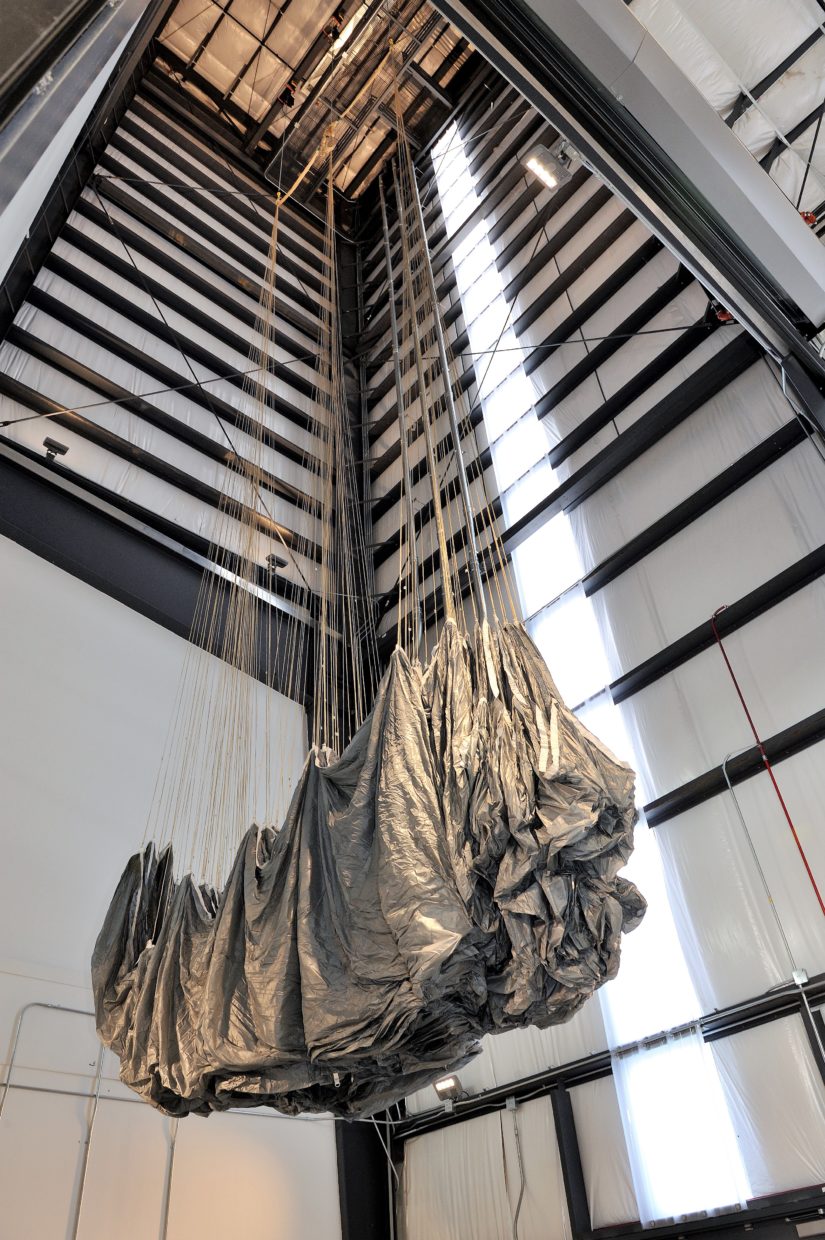 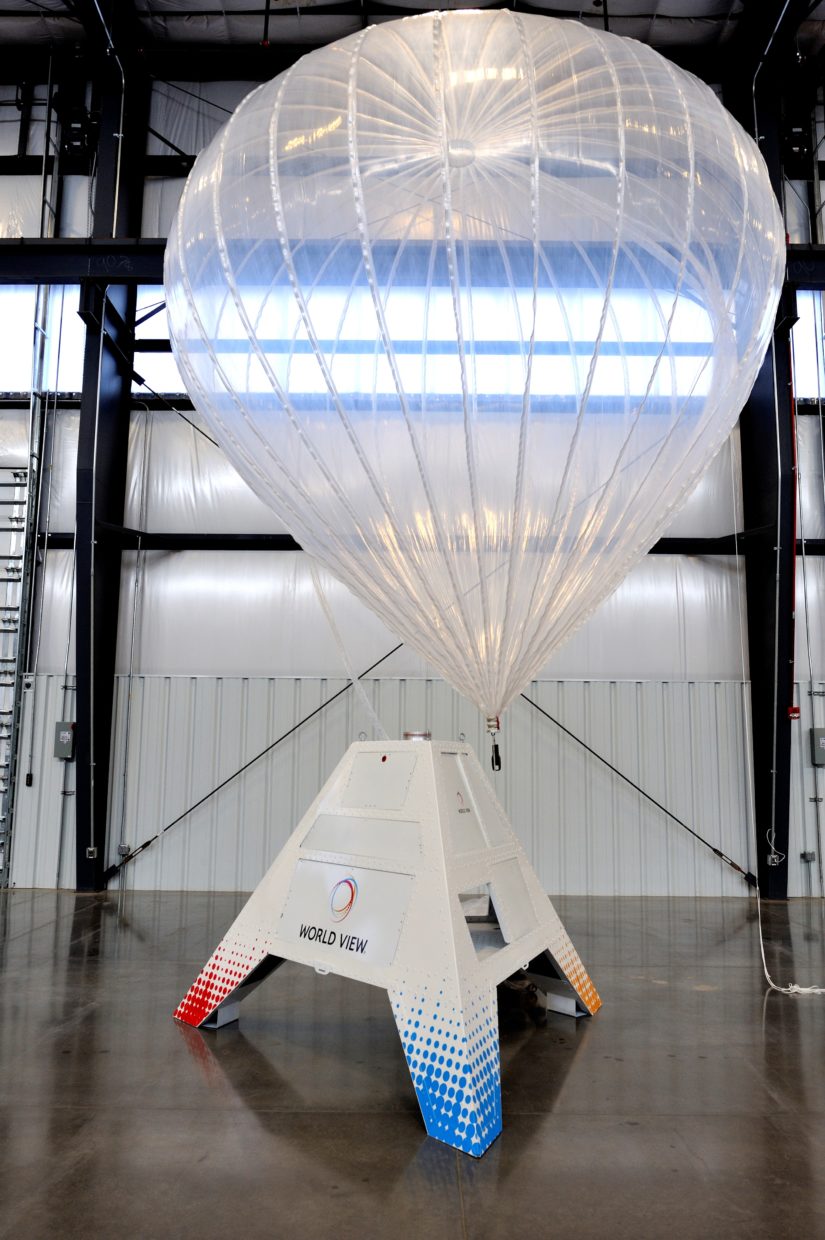 One of World View’s “Stratollites” is ready to fly. The balloon is not to scale. (World View Photo) 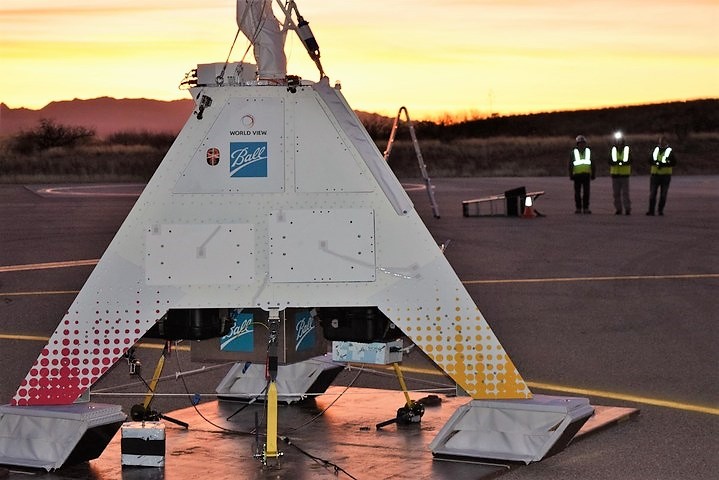 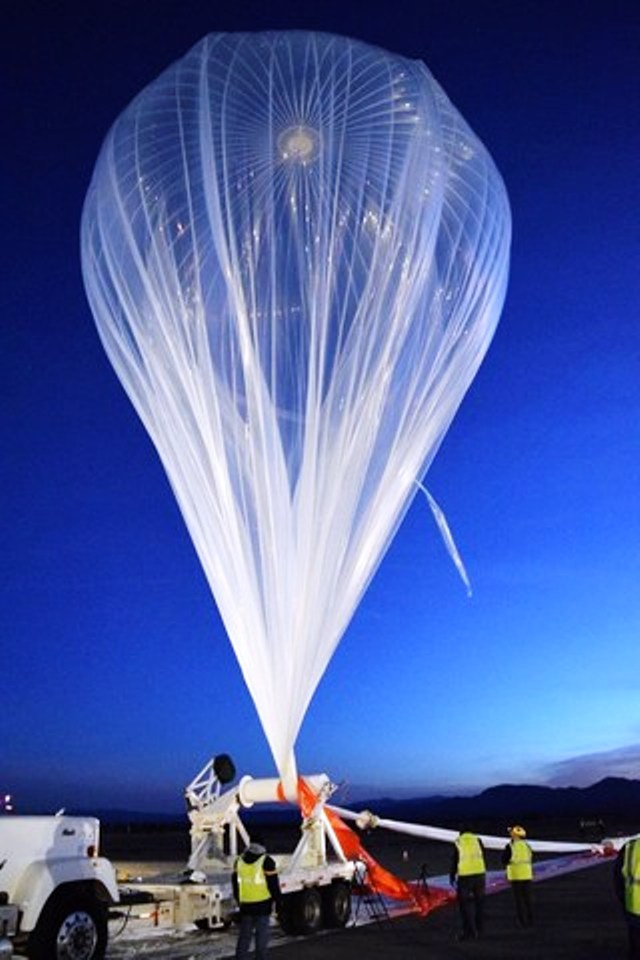 A high-altitude balloon is inflated in preparation for a mission. (PRNewsFoto / Ball Aerospace)

Today’s briefing was conducted in conjunction with the opening ceremonies for World View’s 142,000-square-foot mission control and production facility, which is co-located with Spaceport Tucson. Sen. John McCain, R-Ariz., praised World View for pushing “the boundaries of technology, innovation and exploration.”

“In just a few short years, World View has made historic breakthroughs that have revolutionized the areas of disaster recovery, first response, communications and weather forecasting,” McCain said in a video shown at the ceremony.

The facility boasts a balloon manufacturing table that stretches over a tenth of a mile in length, a 100-foot-tall test and quality-control tower that currently houses one of the world’s largest parafoils, and a mission control room overlooking Spaceport Tucson’s 700-foot-wide launch pad.

The project was funded through a $15 million incentive package from Arizona’s Pima County, which was tied to a 20-year lease agreement with World View. This month, a county judge voided the deal, saying that it violated state laws on competitive bidding and procurement. Pima County’s board of supervisors is appealing the ruling.

Poynter said the legal tussle hasn’t affected World View’s operations because it’s not technically a party to the lawsuit. And MacCallum said there may not be much effect even if the lease has to be negotiated, because he considered the payments to be at fair-market levels already.

“I’m sure that there will be an equitable resolution if there is an issue,” he told GeekWire. “It’s really not a significant concern.”

When the World View venture was unveiled in 2013, the founders targeted stratospheric tourism as their main line of business.

The company is still working on its Voyager passenger capsule, and it’s still taking reservations for hours-long flights. But Poynter held off on giving a timetable for starting the high-altitude balloon tours, in part because of the company’s focus on the remote-controlled Stratollites.

She said the lessons learned from the Stratollite flights will be applied to the Voyager passenger flights, which are currently priced at $75,000 a ticket.

“We frankly do anticipate, because of the demand that we’re seeing, the cost might even go up a little bit before it goes down,” Poynter said. “But of course, we are expecting the price to go down pretty significantly. How low can we get it? I think that remains to be seen. We are certainly hoping to be able to get it down to the $25,000 to $30,000 range.”