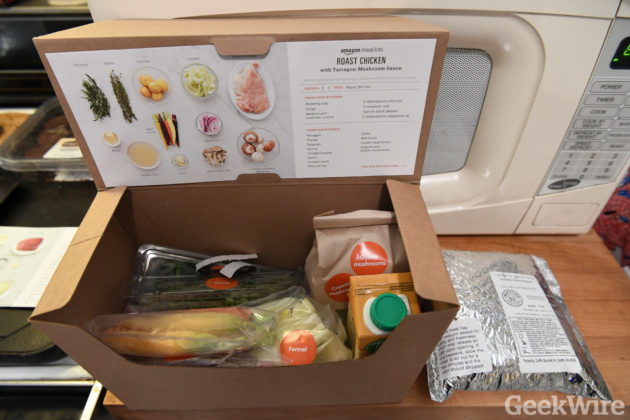 For everyone out there who wants something in between Amazon’s restaurant delivery service and its Amazon Fresh grocery delivery service, your time has come. As GeekWire reported this week, the tech giant has started selling Amazon Meal Kits, rivaling services such as Blue Apron and Hello Fresh.

But rather than subscribing to a service, Amazon customers can purchase individual kits with all the ingredients they need to cook a full meal, along with recipes that lay out how to put them together. Prices range from $16 to $20 for an Amazon Meal Kit with two servings.

So, of course, the GeekWire team placed an order and tried out the Amazon dinners. We talk about the experience on this episode of the Week In Geek.

GeekWire co-founders John Cook and Todd Bishop said they were impressed by the meals, particularly the Steak au Poivre with Parmesan Fries & Snap Peas. All in all, the cooking process seemed to go smoothly, and there’s potential for Amazon to do well in this market.

But they’re not sure how big a market this will eventually become, given that it appeals to a relatively niche customer base. They’re also skeptical if Amazon could rise to the level of established players in the market already, including Blue Apron and the Paul Allen-backed Sun Basket.

In other hands-on news, Todd tried out one of the newest ways to get around Seattle this week: “dockless” bike sharing. Two companies, Spin and Limebike, have signed on to conduct a pilot bike sharing program in the city, just a few years after the flop of bike sharing startup Pronto.

Todd took a Spin for a test-ride this week, and GeekWire is planning a review of the two services when Limebike launches later this month.

The new services are different from past tries in a few ways. First, the bikes float freely around the city. Instead of needing to be picked up and dropped off at special stations, or docks, like the past Pronto service, the bikes can be locked up essentially anywhere, much like Car2go or ReachNow. Todd says he thinks this will be a big boon for the new services.

Unfortunately, the services also don’t provide helmets, something Pronto did provide. This is a big concern for a few reasons: first, carrying a helmet around is a bit of a hassle; second, it could lead to cyclist unwittingly riding without a helmet, something that’s both dangerous and illegal in Seattle.

All in all, the jury’s out on whether these two new experiments will succeed, but that doesn’t stop us from debating it.

Listen to the show above or download it as an MP3.