Venture capital investment activity dipped last year from a record 2015, but returned to normal activity in 2016 and marked the second-highest total in the past 11 years.

Pitchbook and NVCA today released their Venture Monitor for Q4 2016 and found $12.7 billion deployed to 1,736 companies for the most recent quarter.

Washington state ranked fourth with $568 million invested across 81 deals, while Texas ranked fifth in dollars invested with $385 million. It ranked fourth in terms of deals with 106.

Bellevue, Wash.-based OfferUp had the fifth-largest VC round at $130 million, while the biggest financing was the $210 million round for San Francisco real estate company Opendoor.

In its report, Pitchbook said that the number of deals increased in 2015 due to large valuations. 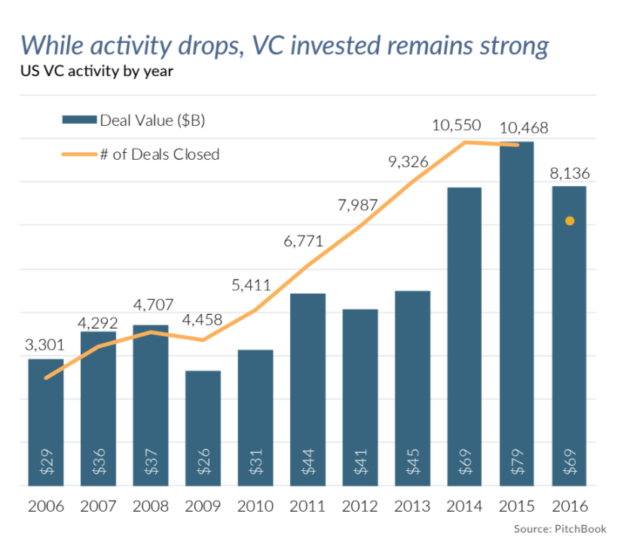 “As a result, 2016 represented less of a slowdown and more of a return to normalization,” the report notes. “Venture investors are now circling back to tried and true ways of deploying capital and being much more critical of their investment options. Going into 2017, the question remains whether venture investment activity has plateaued, or if it will continue to downshift.”

“As companies stay private for longer than ever, the venture capital markets are maturing accordingly,” Gabbert said in a statement. “After a couple years of frenzied investments and lofty company valuations, the venture capital ecosystem is moving away from a financing peak and returning to a normal, healthy investment climate.” 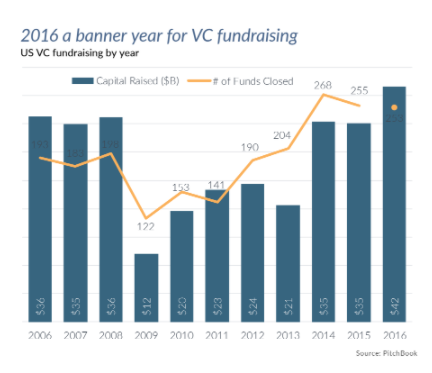 There were more than 8,136 VC deals that Pitchbook-NVCA found completed in 2016, a 22 percent decline from this time last year. It’s a “clear indication that venture investors are being much more critical of their investment opportunities,” the report noted.

Fundraising reached its highest levels in the past decade, with $41.6 billion raised across 253 funds in 2016.

As far as exit activity, the median exist size in 2016 for venture-backed companies was $84.5 million, the highest in a decade. The report noted 39 IPOs in 2016, the fewest since 2009. Looking ahead, there is “newfound optimism” for more companies going public in 2017, the report said.

A separate report released Wednesday from PricewaterhouseCoopers and CB Insights, found that venture capital investors sunk $11.7 billion in 982 deals during the fourth quarter, a 17 percent drop in dollars and a 14 percent drop in deal compared to the third quarter. For the year, the report showed $58.6 billion invested in 2016, a 20 percent decline from 2015.

“Despite continued deceleration in venture capital investment activity, the startup ecosystem remains flush with quality deals,” Tom Ciccolella, US Venture Capital Leader at PwC, said in a release. “As industries continue to be disrupted by technology and Internet capabilities, new opportunities are emerging. It’s these opportunities, despite the decline, that continue to drive venture capital momentum.”