Some Uber and Lyft drivers in Seattle say a new law that would give them the right to unionize actually endangers their livelihood. 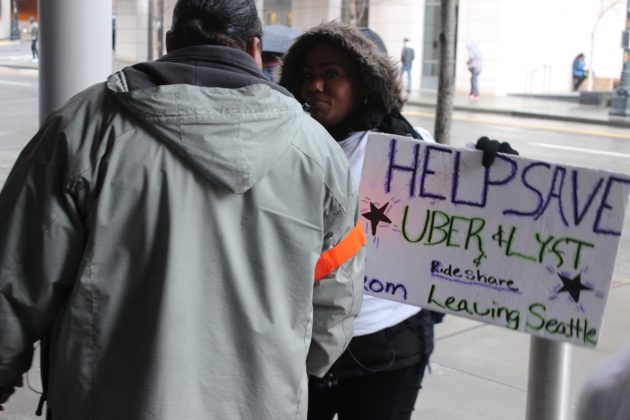 Chants of “Who’s the boss? We’re the boss!” rang around Seattle City Hall on Tuesday as a small group of drivers protested the landmark law set to go into effect today that lets drivers for ride-hailing companies decide if they want to bargain collectively.

The first-of-its-kind law, passed last year, gives drivers the ability to band together to negotiate pay rates and employment conditions, among other conditions. Currently, these drivers are considered independent contractors and are not protected by traditional labor standards — including Seattle’s $15 per hour minimum wage law. They also do not have collective bargaining rights covered by the National Labor Relations Act.

Hours after Uber filed a petition in King County Superior Court on Tuesday to block recently-published rules that cover issues related to the ordinance, a group of about 30 drivers gathered at City Hall.

“We feel like the City Council decision to allow for collective bargaining is essentially threatening our livelihood,” said driver Chris Pugh. “We are all small business owners and feel like the union involvement could result in us losing a lot of our freedoms.”

Those freedoms include deciding when, where, and how much drivers can work. Pugh said he’s “definitely” not anti-union — he just thinks that the law would negatively affect many drivers.

“Not only would it result in me losing a lot of my freedom as a small business owner, but both companies might leave Seattle,” he said.

Much of the protestor frustration was directed at Teamsters Local 117, an organization that represents taxi drivers and unions across the Puget Sound region and helped craft the union law.

“All they want is money and dues,” said Charles Jenkins, who helps lead a non-profit called Drive Forward that was co-created by Uber.

Jenkins added that the drivers who want to unionize “don’t actually understand what unions are.”

“We won’t stand and let [Teamsters] come in and destroy our flexibility,” Jenkins said.

The most controversial aspect of the law concerns which drivers get to vote on collective bargaining. New drivers who have been with their respective ride-hailing companies for less than 90 days prior to today’s kick-off of the law will not get a vote. Drivers also need to have made 52 trips starting or ending in Seattle during any three-month period in the last year to be eligible.

Mike Livingstone, a part-time driver for Uber and Lyft, wouldn’t be able to vote under these rules. He said the job provides a “very important” second income and is worried Uber and Lyft will leave Seattle because of the union law.

We’ve reached out to Teamsters for comment and will update this story when we hear back. Update: Here’s a statement from Teamsters:

“We are working with drivers to raise up standards at Uber and to make sure that Uber jobs are good jobs. Drivers want flexibility and independence, and they also want to be paid a living wage. Right now too many Uber drivers are reporting making less than the city’s minimum wage. Uber is telling drivers that it will have to leave Seattle if they come together to have a voice over their pay and working conditions. They are also telling them that they will lose their flexibility. There is nothing in this law or in the collective bargaining process that would limit their flexibility. This kind of scare tactic comes right out of the anti-Union playbook. Uber is a $67 billion company and it can afford to give drivers the flexibility and independence they need while creating a mileage rate that the majority of drivers can live on.”

In the past few months the city has struggled to implement the landmark law. City staff asked for an additional six months from the original September onset date to figure out some of the key issues, but a frustrated City Council Education, Equity and Governance Committee granted a shorter extension to January.