Today is the deadline for groups to turn in applications to renovate Key Arena at Seattle Center, possibly for the return of an NBA and/or NHL franchise, and two groups have come forward with details of their bids.

The two are AEG and Oak View Group (OVG), which is led by former AEG CEO Tim Leiweke. Both groups bring with them plenty of arena and team ownership credentials, and both are looking to preserve Key Arena’s iconic roof. The arena was built for the 1962 World’s Fair and received an extensive renovation in the 1990s.

Seattle Mayor Ed Murray had previously said the city was not interested in Key Arena as an NBA/NHL arena site, but that later changed, and the city issued a request for proposals in January to redevelop the arena. The deadline for the RFP passed this evening.

“Today is an important day in our goal of bringing the Sonics home and the NHL to Seattle,” Murray said in a statement. “Two well-known organizations submitted proposals to redevelop KeyArena, totaling more than $1 billion in investments between them. Their interest shows how Seattle has become one of the most desirable cities in America for sports and entertainment.”

Key Arena isn’t far from the South Lake Union where thousands of Amazon, Facebook, and eventually Google, employees work everyday. The site is a traffic challenge on a daily basis, and could be even more so with an NBA or NHL game drawing thousands more people done there every few days. Any decision on an arena is sure to affect the tech industry from a quality of life and traffic standpoint.

GeekWire sat down with Leiweke last month. He said the Seattle Monorail could be a solution to some of the traffic difficulties with a Key Arena renovation. There are also ways to automate to the surrounding traffic light system, Leiweke said, and set-up nearby pick-up locations for ride-hailing companies like Uber and Lyft. 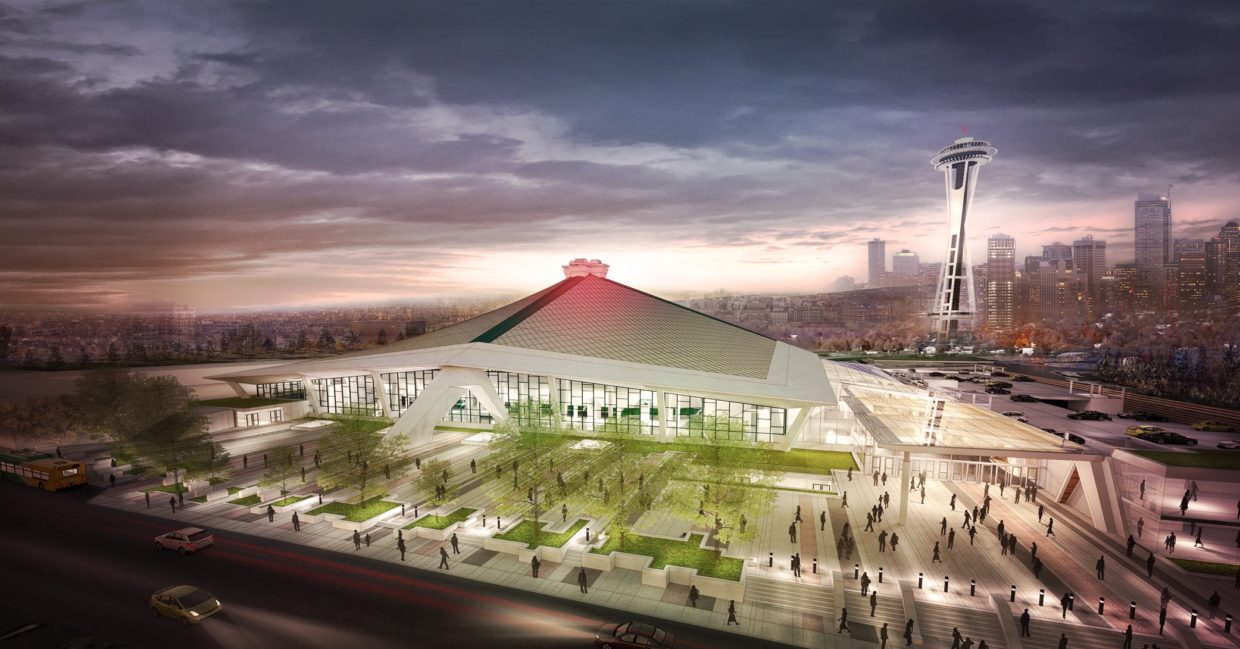 OVG is proposing a $564 million, privately-financed project called New Arena at Seattle Center that protects the roof, columns and walls of Key Arena, but rebuilds pretty much everything else, KING5’s Chris Daniels reported. To create more room for a full ice rink and concourses in the arena, OVG proposes digging down an additional 15 feet, a move Leiweke told Daniels dramatically increased the project budget. OVG’s plan also includes building an 800-stall parking garage and eight loading docks on the south side of the site.

You can read OVG’s executive summary here. The firm notes that it will “incorporate the latest technology to facilitate pre- and post-event fan communication.”

“For example, OVG will identify available parking spaces in advance for its customers using mobile apps that provide realtime pricing, availability, reservations and other parking services,” the executive summary reads. “Our vision is to create an environment where drivers know their route in advance, predetermined parking destination, and can access real-time traffic updates before they begin their trip to the Seattle Center.”

“We welcome and would like to explore innovative ride sharing programs and build designated drop-off and pick-up locations for mobility network companies (MNCs), such as Lyft and Uber,” it noted. 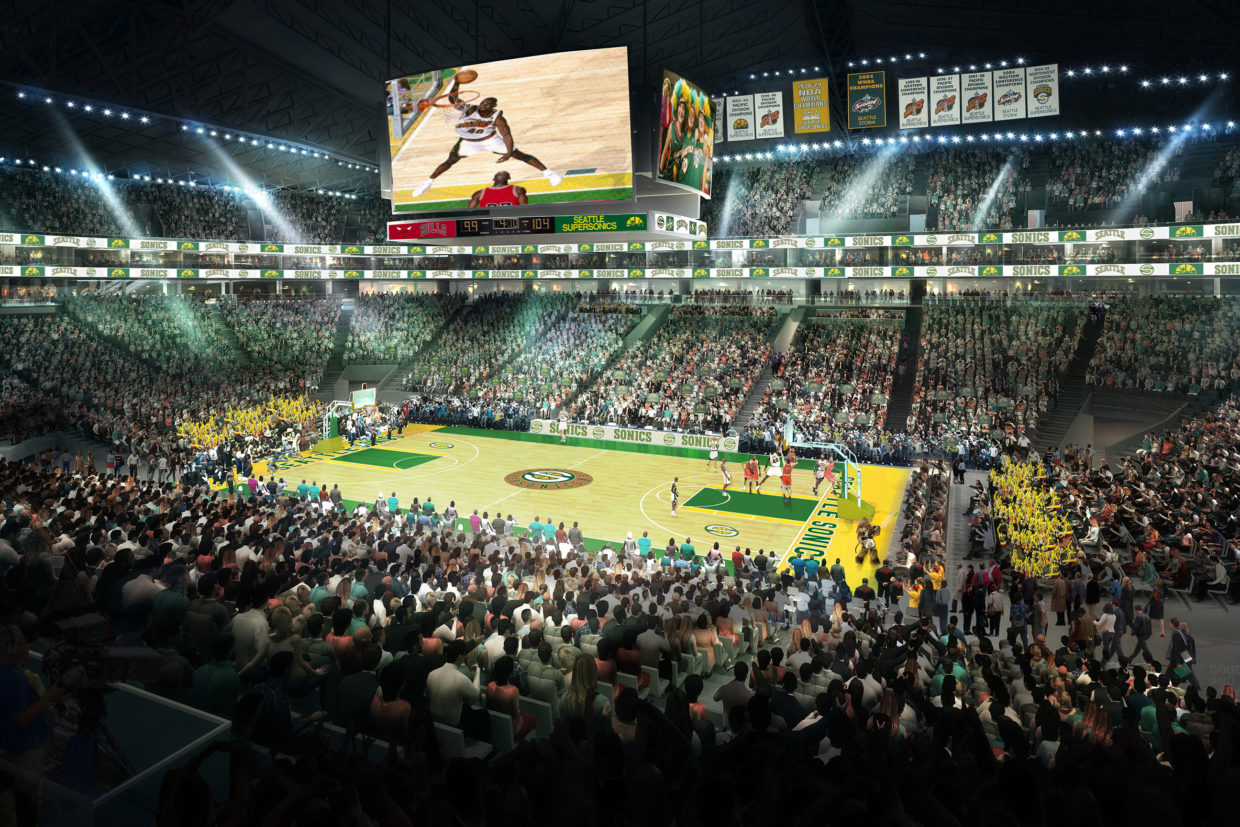 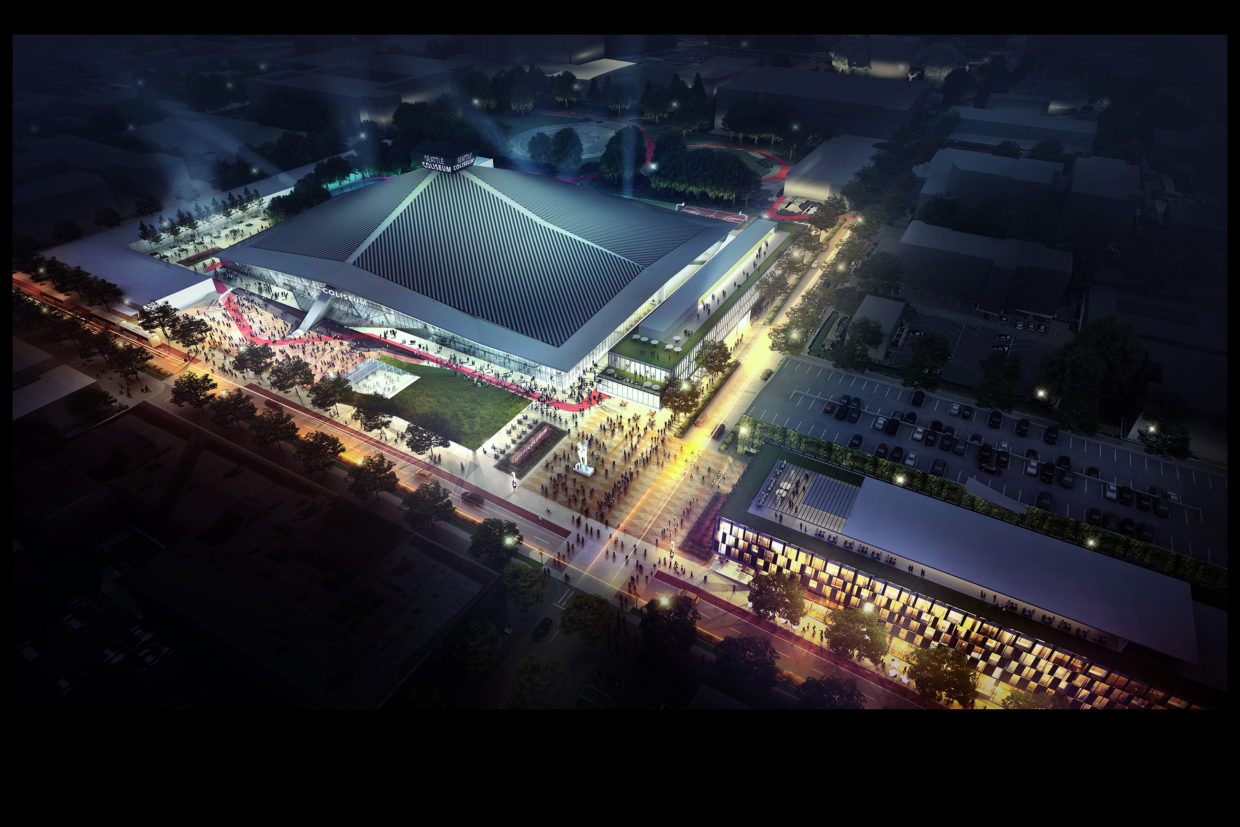 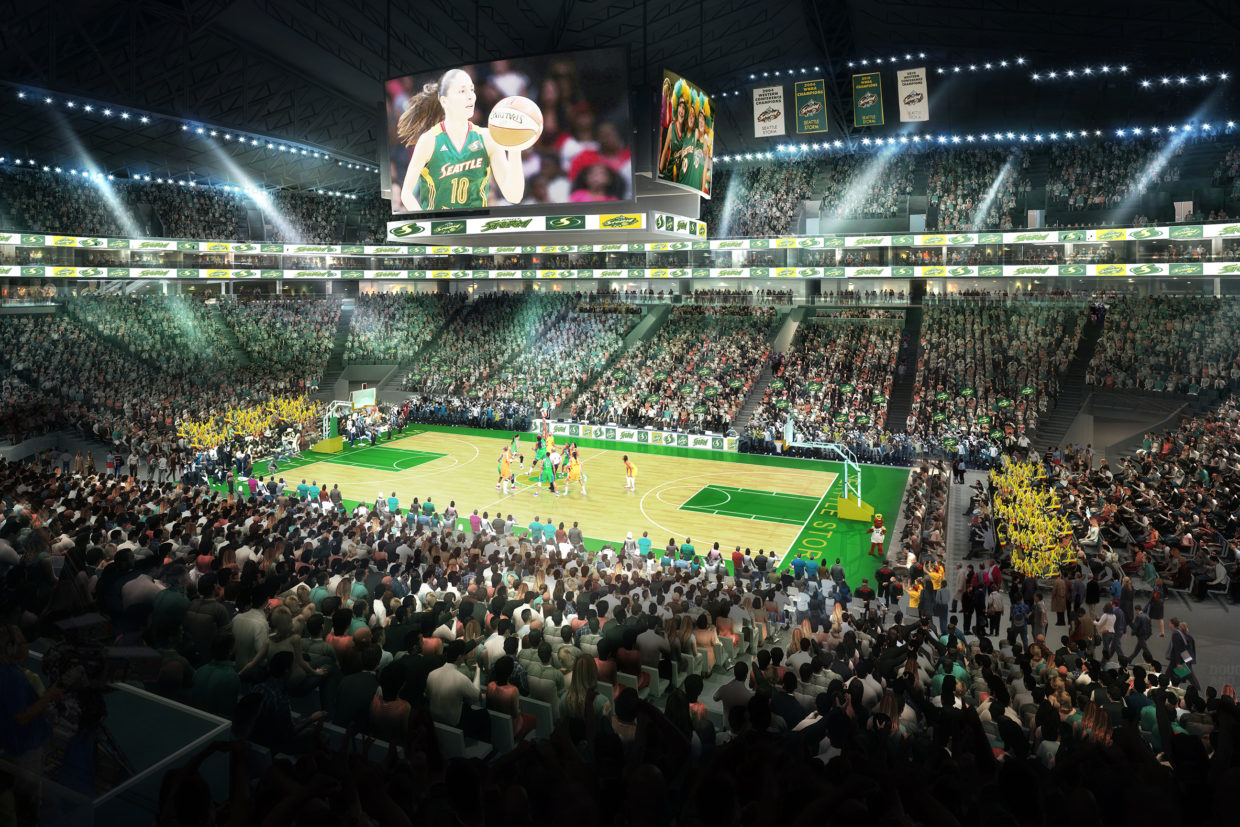 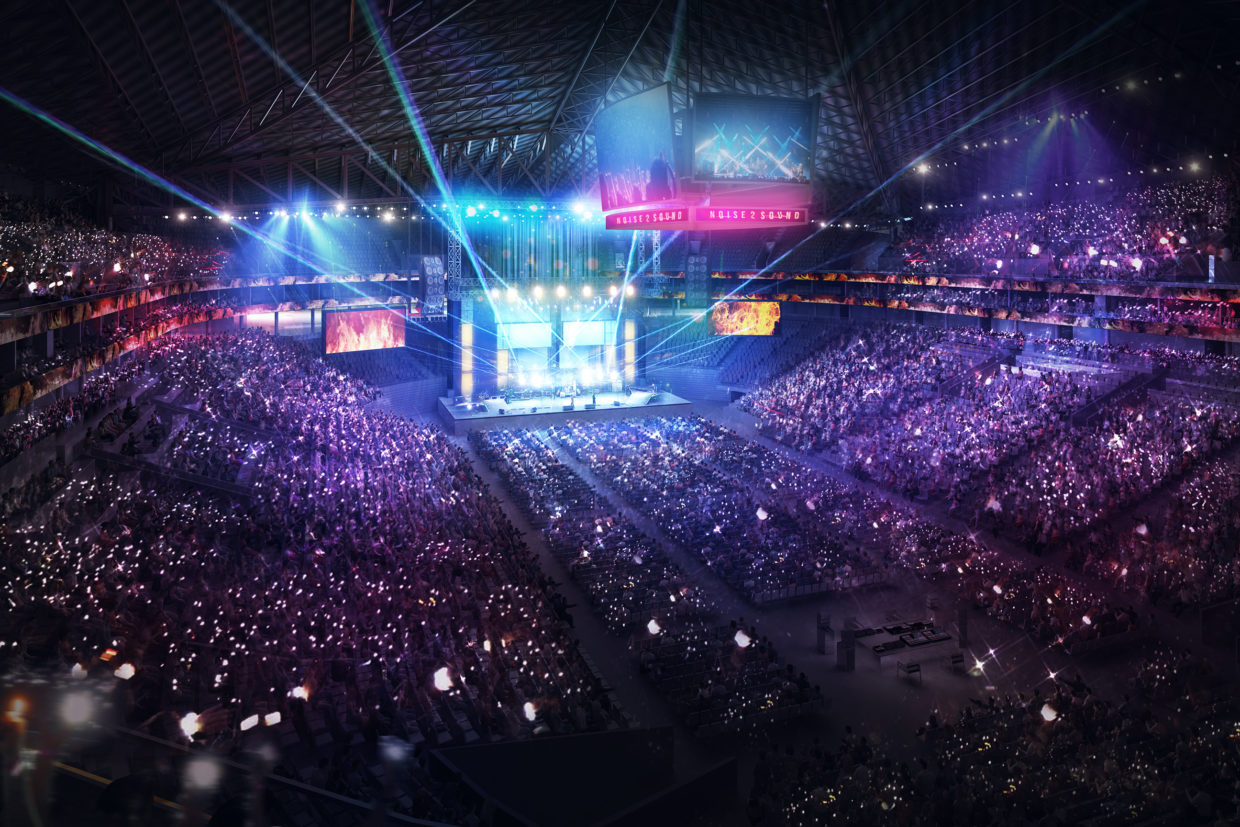 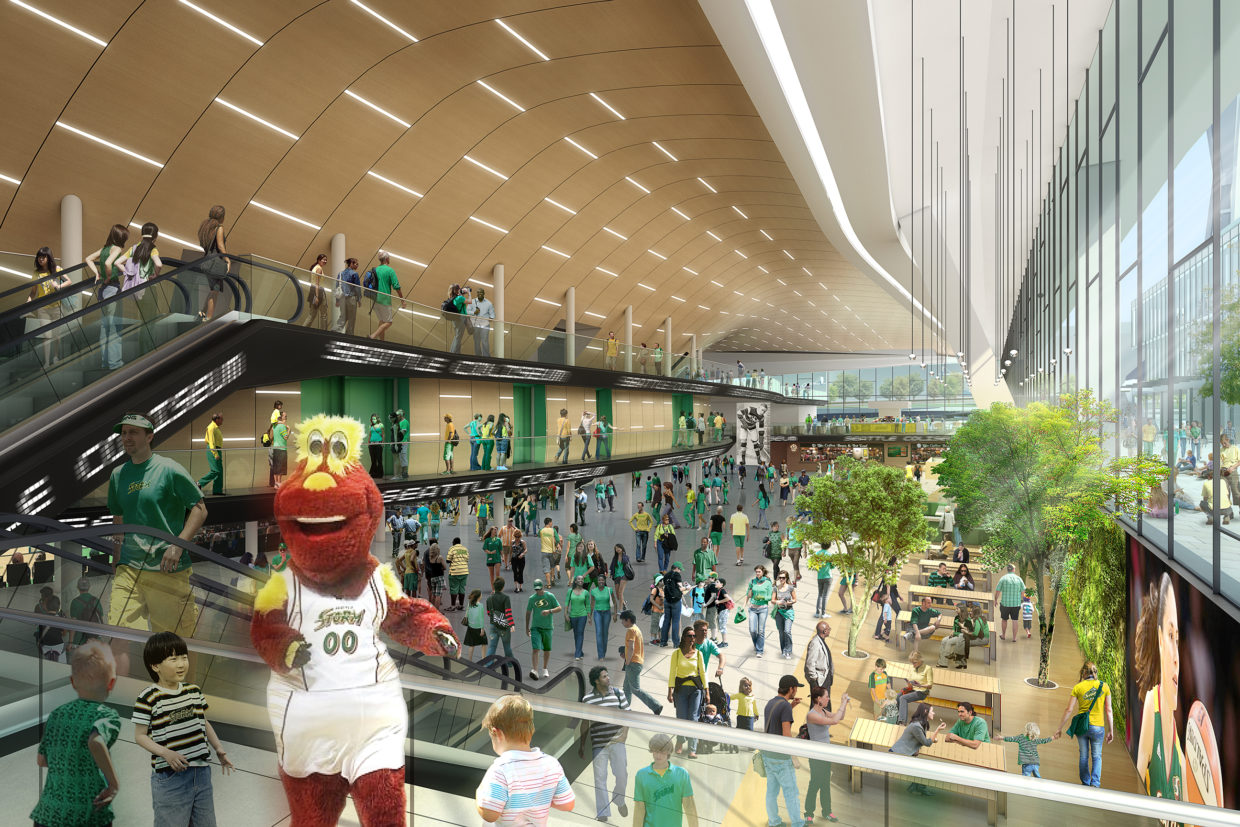 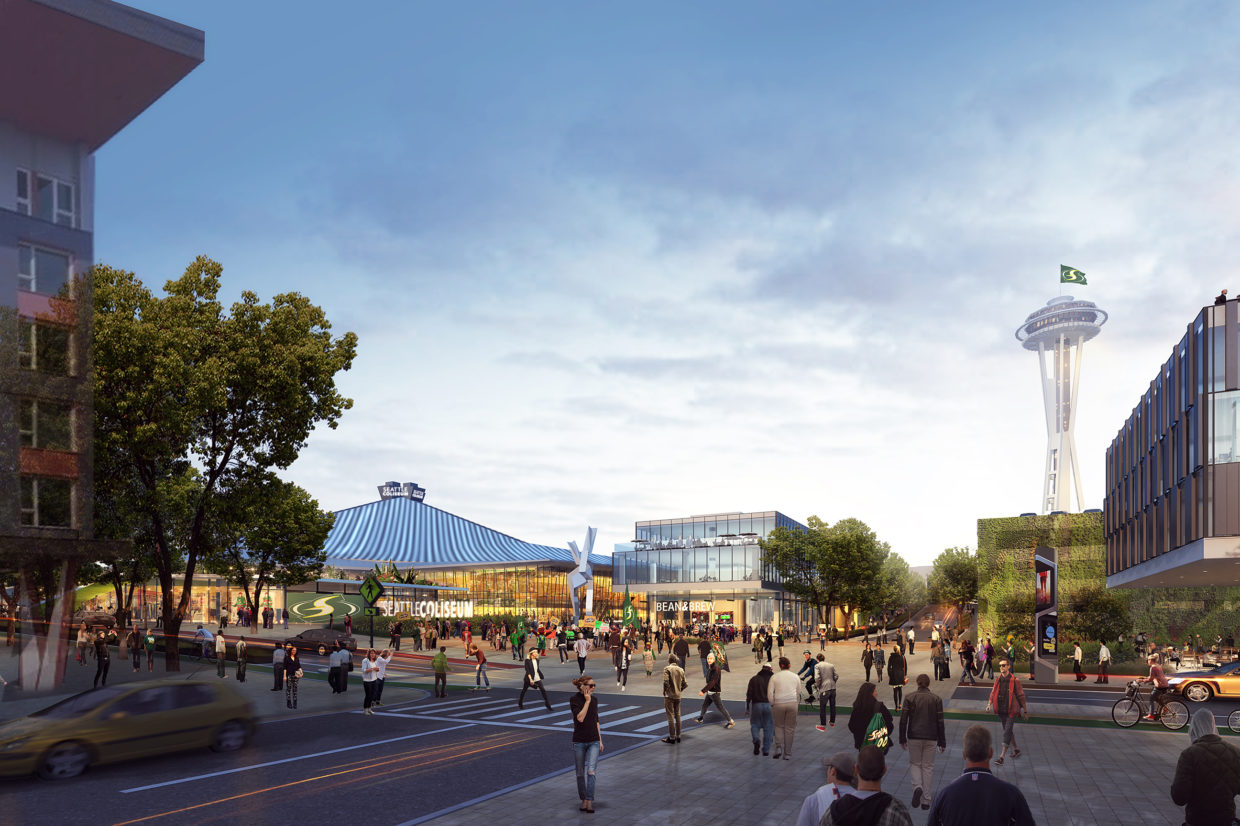 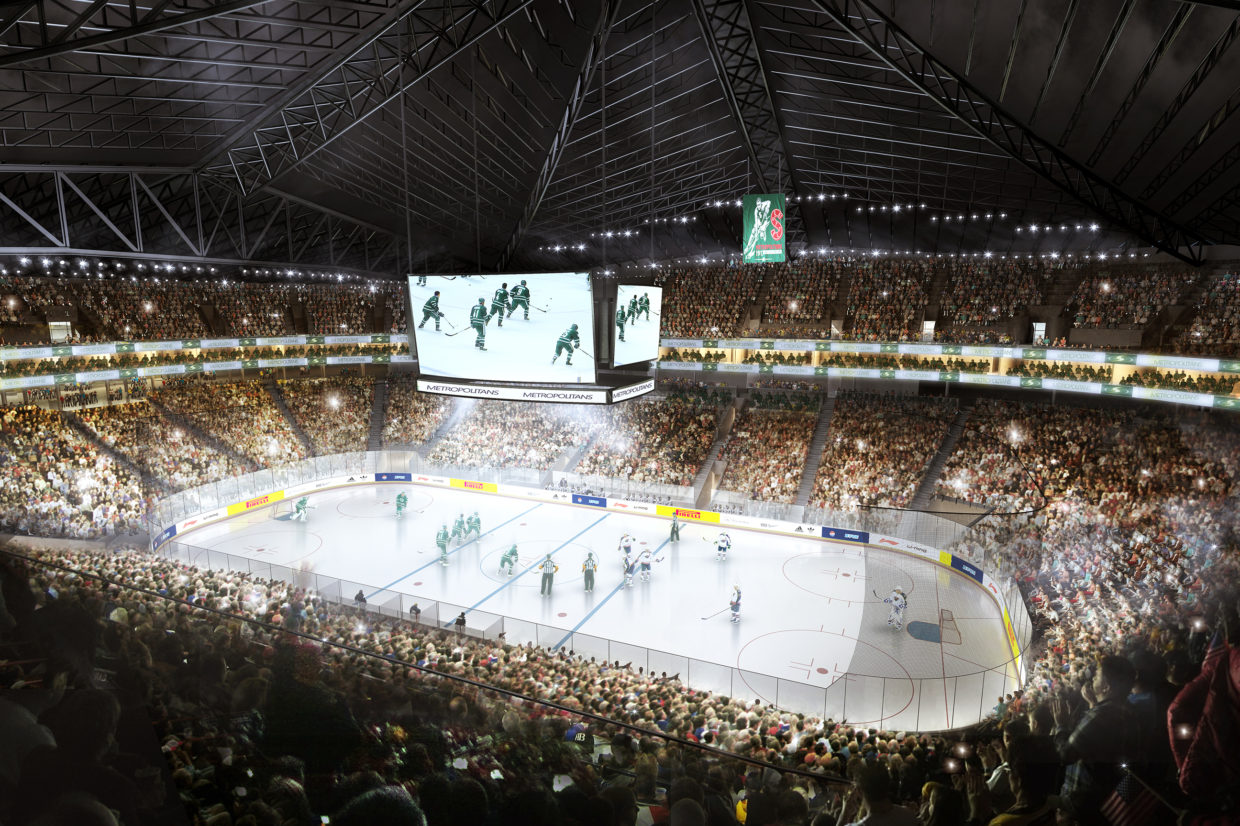 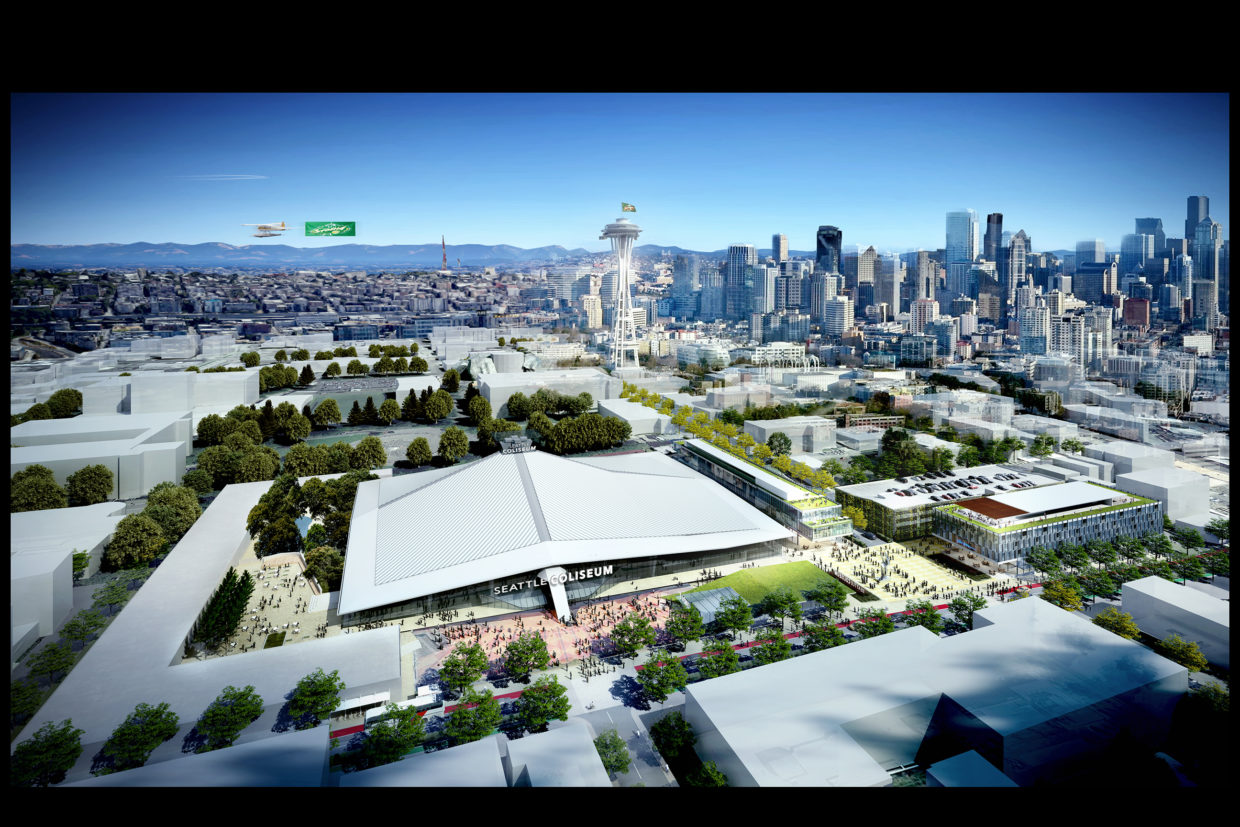 AEG and Hudson’s $520 million proposal calls for a 600,000-square-foot facility. Seattle Coliseum does include some “public financing concept,” Daniels reports, but the team says it will not seek new taxes or existing public capital from the city. It will also invest $5 million to “accelerate existing transportation strategies” around the arena.

You can read AEG’s executive summary here. It noted that it will invest $5 million “to accelerate existing transportation strategies around the arena and create a shared mobility hub adjacent to the arena,” adding that “The Seattle Coliseum will be fully connected into Seattle’s transportation infrastructure, and the arrival of Light Rail will integrate seamlessly into the facility.”

AEG said on its arena website that it seeks to retain the historic character of Key Arena as well as “Seattle’s legendary 12th Man phenomenon.” But the renovated structure will also be built as the “‘venue of the future,’ featuring the latest facilities, technologies and services amenities.”

The Key Arena proposals compete with each other, but they are also competing with another location entirely. The city is still evaluating a proposal from Chris Hansen to build a new arena south of downtown near Seattle’s other major arenas, CenturyLink Field and Safeco Field.

Hansen is taking a second run at the Seattle City Council to secure vacation of one block of Occidental Avenue that is crucial to his $500 million privately-funded arena. The council declined his original vacation request last year, but Hansen has since added more public benefits to his proposal.

Daniels reports that a vote on a street vacation for Hansen’s project probably won’t come until this summer, after the Key Arena situation is settled. The City will review the proposals for Key Arena and recommendations will be delivered to the mayor in June.

Editor’s note: This story was updated with comments from Murray and information from the city’s press release.