I’m not exactly a car junkie, but I just had a lot of fun at the Seattle International Car Show — all thanks to technology.

This annual event brings together nearly every big car company, from Toyota to Tesla, which set up big booths inside the CenturyLink Event Center and roll in their latest vehicles.

Technology is now everywhere at the show, given all the innovation happening with electric cars, in-vehicle connectivity, autonomous driving, and much more.

“Companies are trying to get these cars as technically able as they possibly can,” said Tom Voelk, an automotive contributor to The New York Times. “They see it as a selling point. They are looking for every advantage that they can possibly get.”

“I think the auto industry has finally understood that you can’t just put flash in a car,” he said. “It has to really benefit the consumer.”

Toyota steps into the future 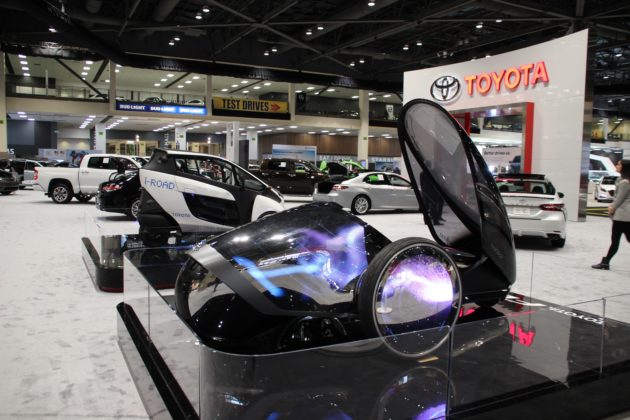 Toyota had two of the most futuristic vehicles on the show floor. The first was its iRoad, a three-wheeled electric motorcycle-meets-car that is being tested in Europe and Japan. The iRoad is three feet wide, seven feet long, gets about 30 miles of range on one charge, and has a top speed of 37 miles per hour.

“This was basically designed for urban living,” said Steve Dahlberg, a product training specialist for Toyota. 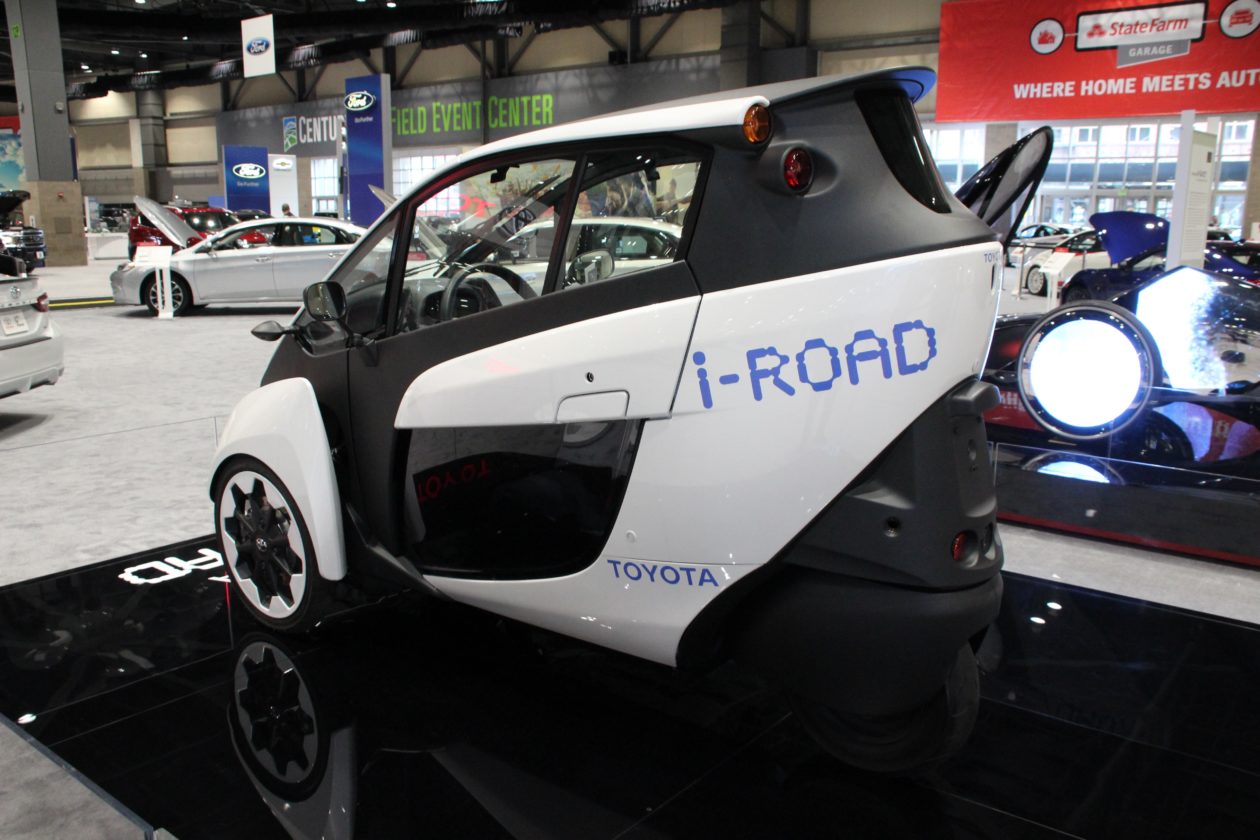 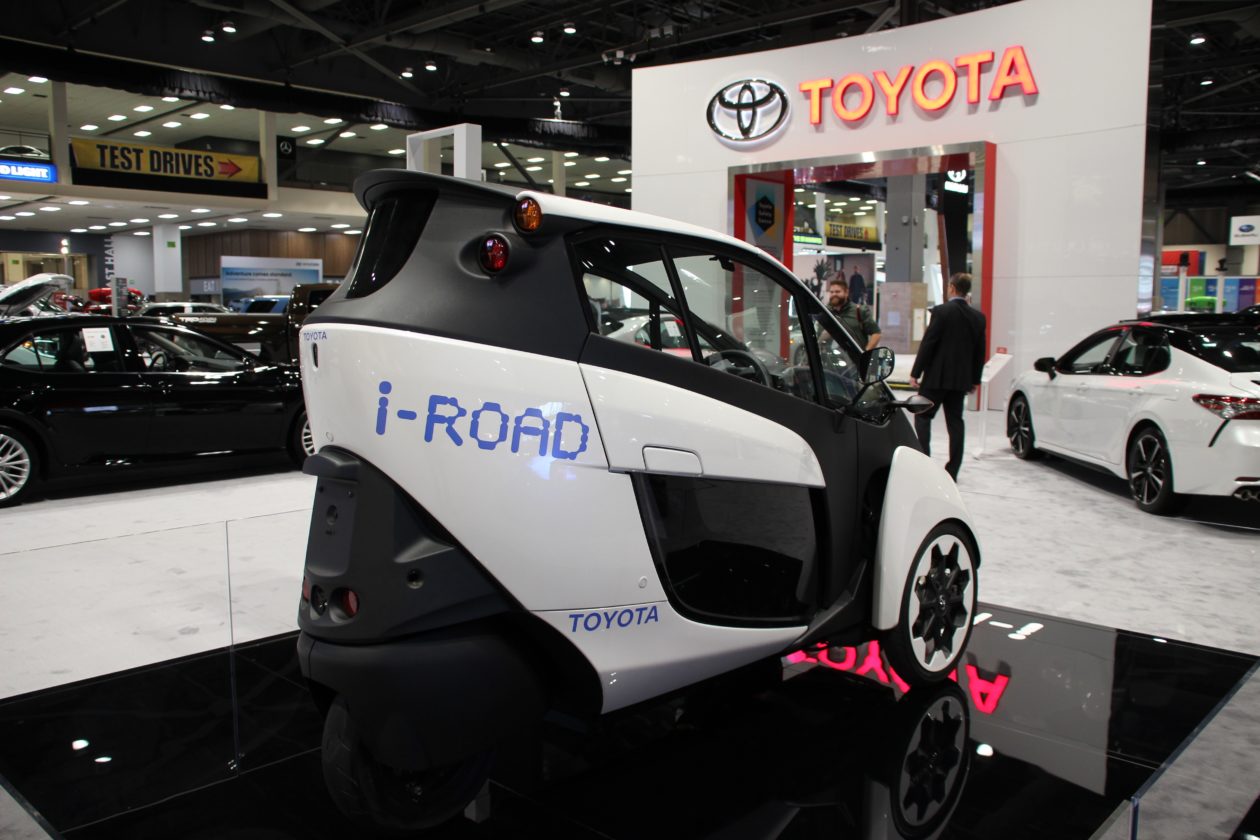 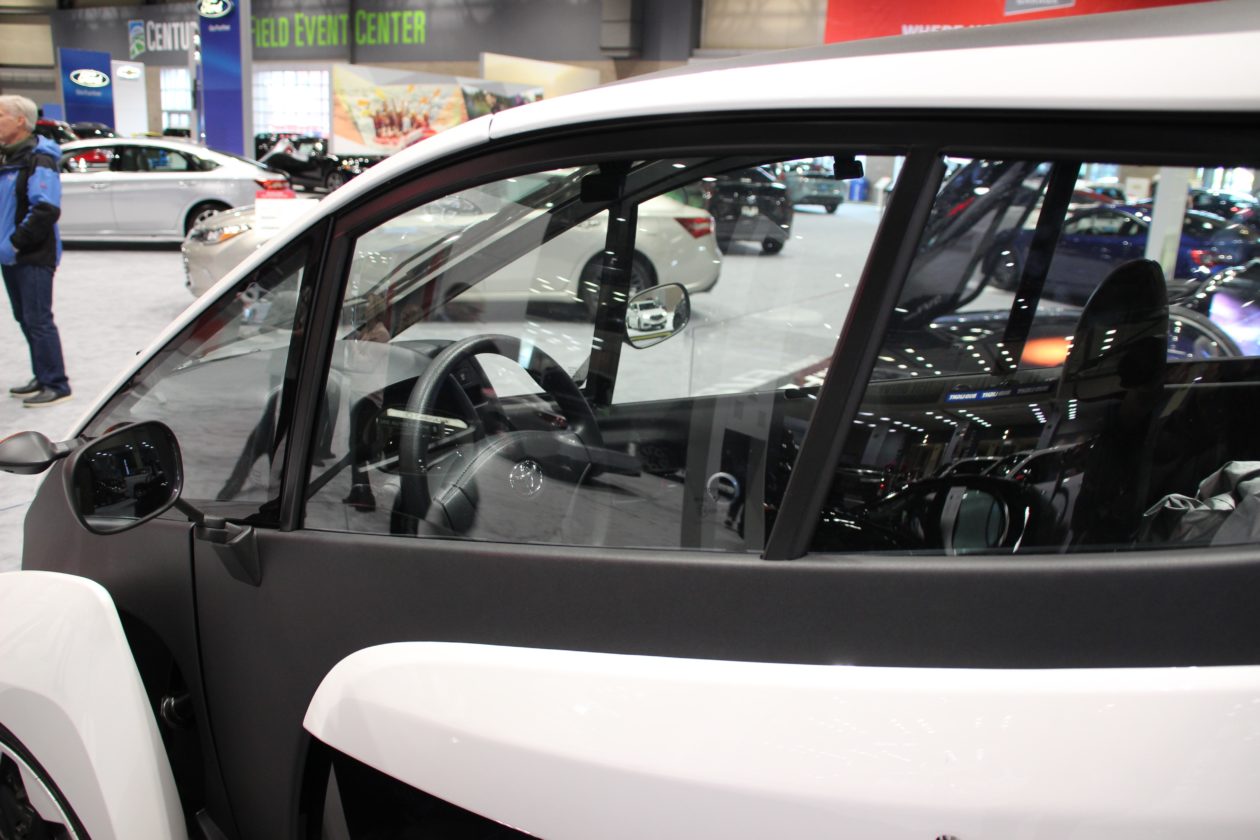 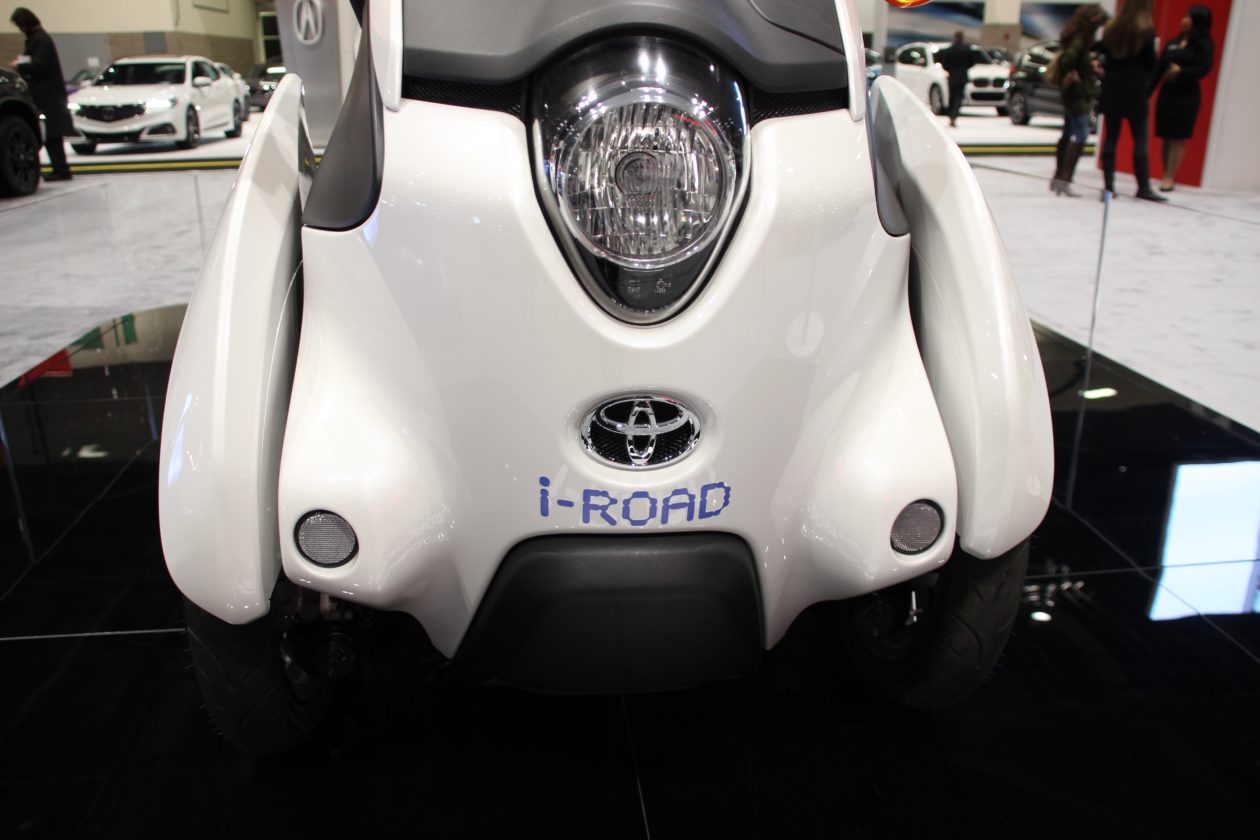 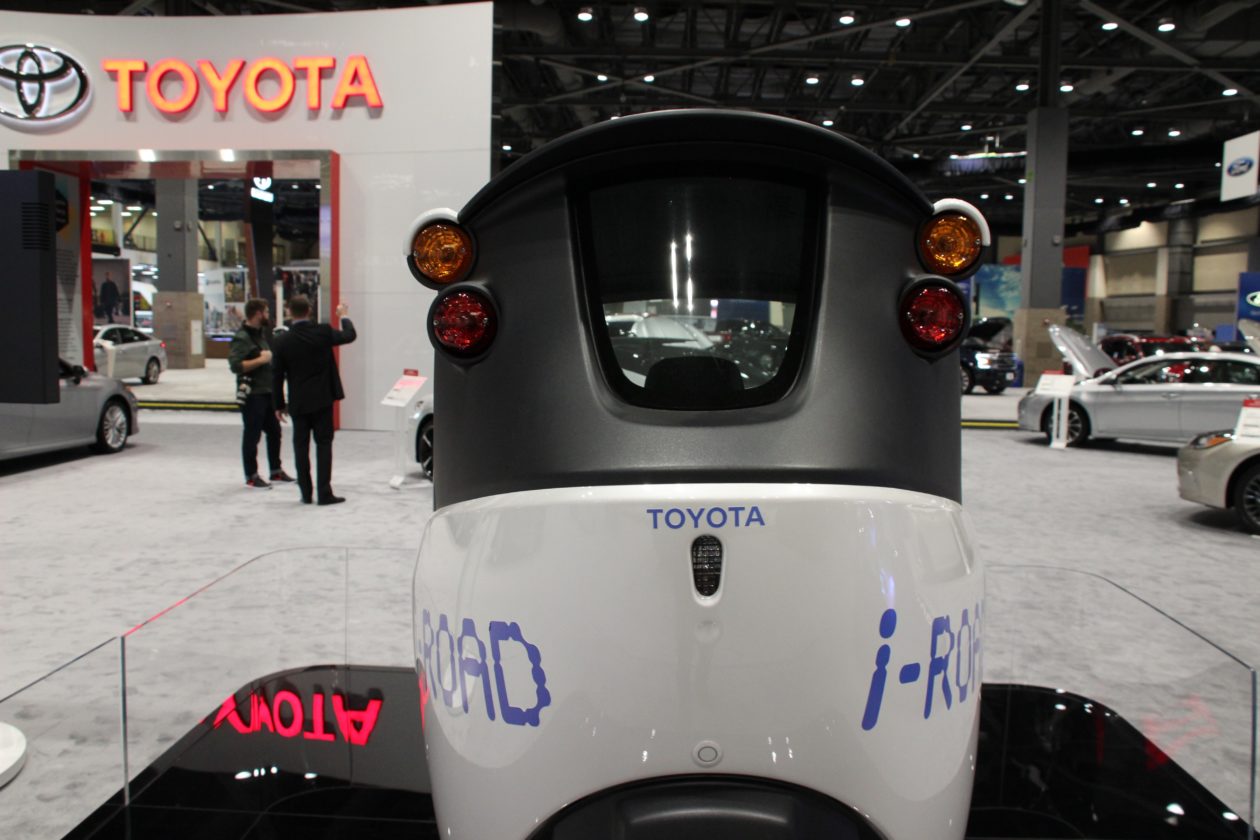 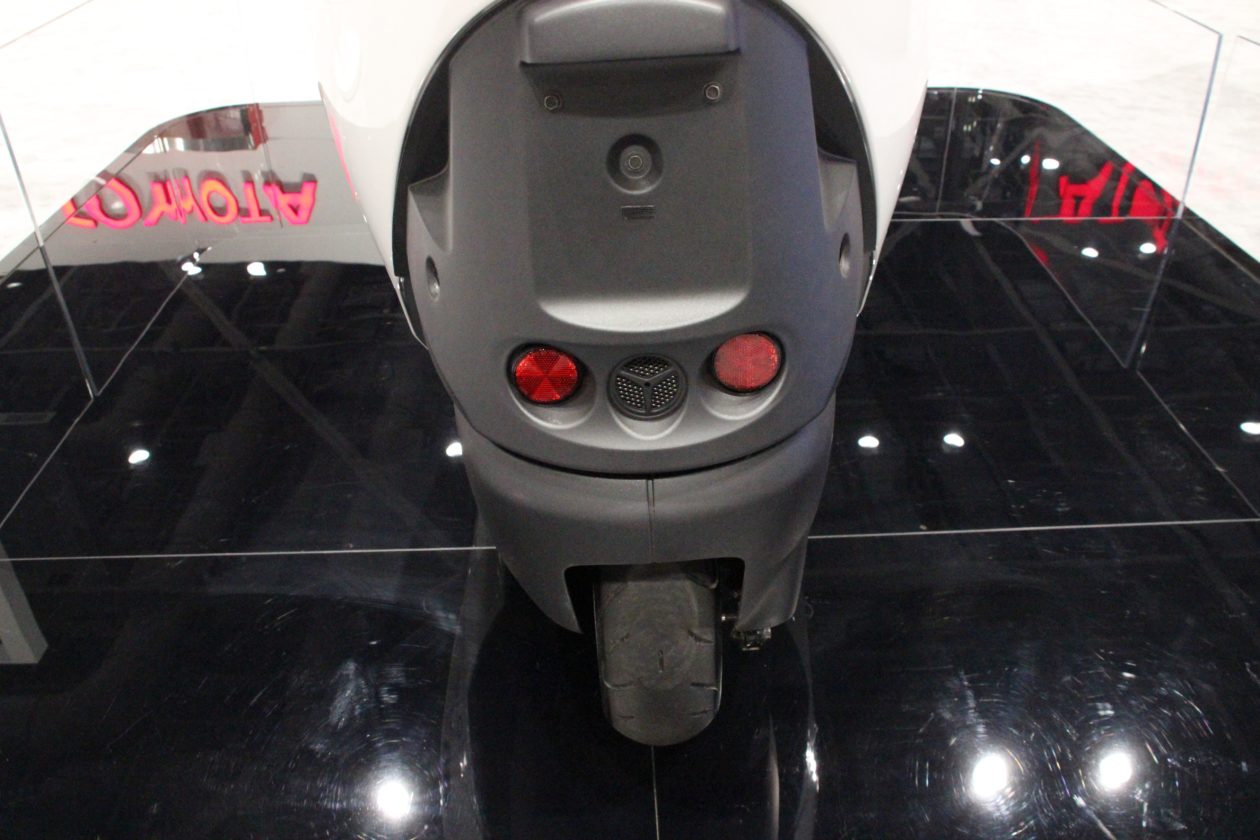 The iRoad features some unique engineering, as it can lean side-to-side depending on where the driver puts his or her weight. Check it out in this video:

The car, which first debuted in 2014, could arrive in the U.S. as early as next year, but Toyota hasn’t made an official announcement. I could totally see this catching on in big cities, depending on the price point.

“This is for the person that truly loves city living and just wants to go to work, the grocery store, and the gym,” Dahlberg noted.

Looking further into the future, Toyota also had its FV2 concept car on display. This vehicle, which also debuted in 2014, has no steering wheel and is operated by the driver shifting his or her body to move forward, backward, left, or right. And yes — those are wheels with TV screens. 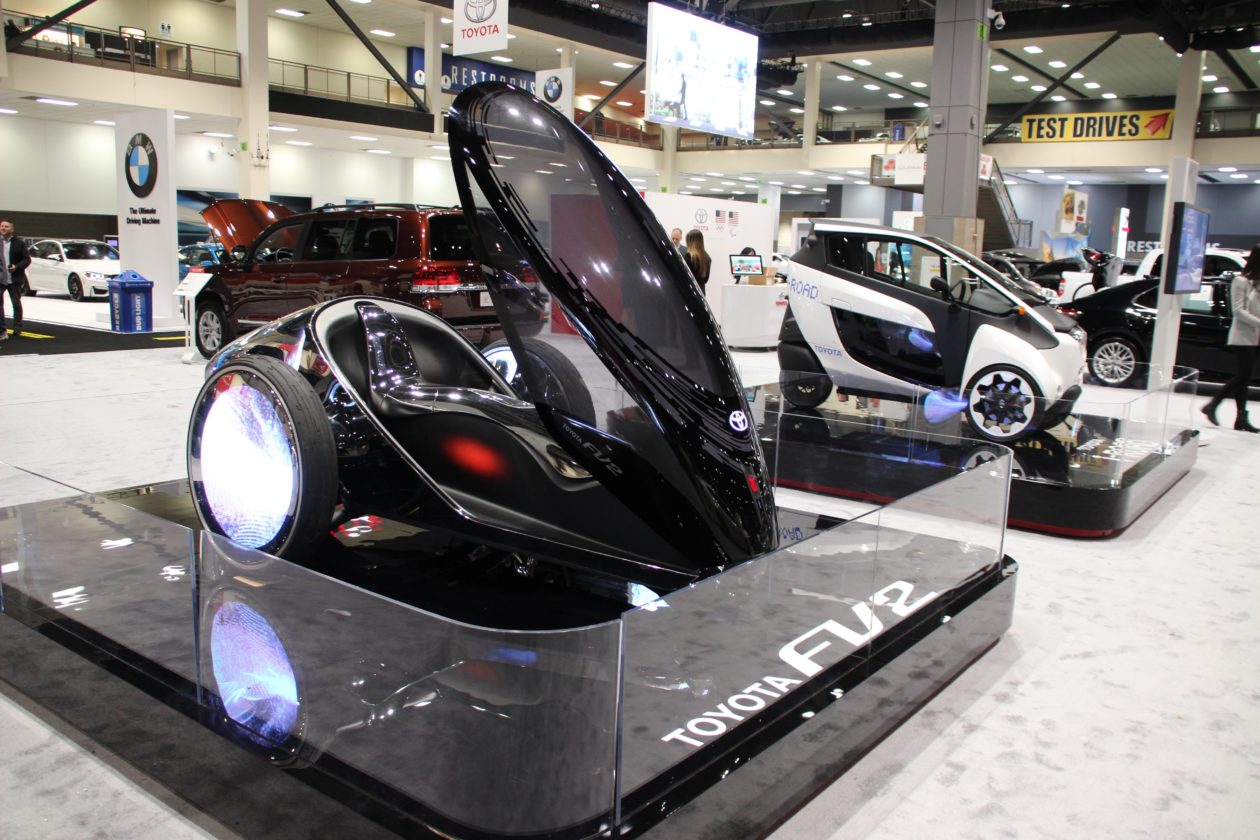 A glimpse of the future at Toyota’s booth. (GeekWire photos / Taylor Soper) 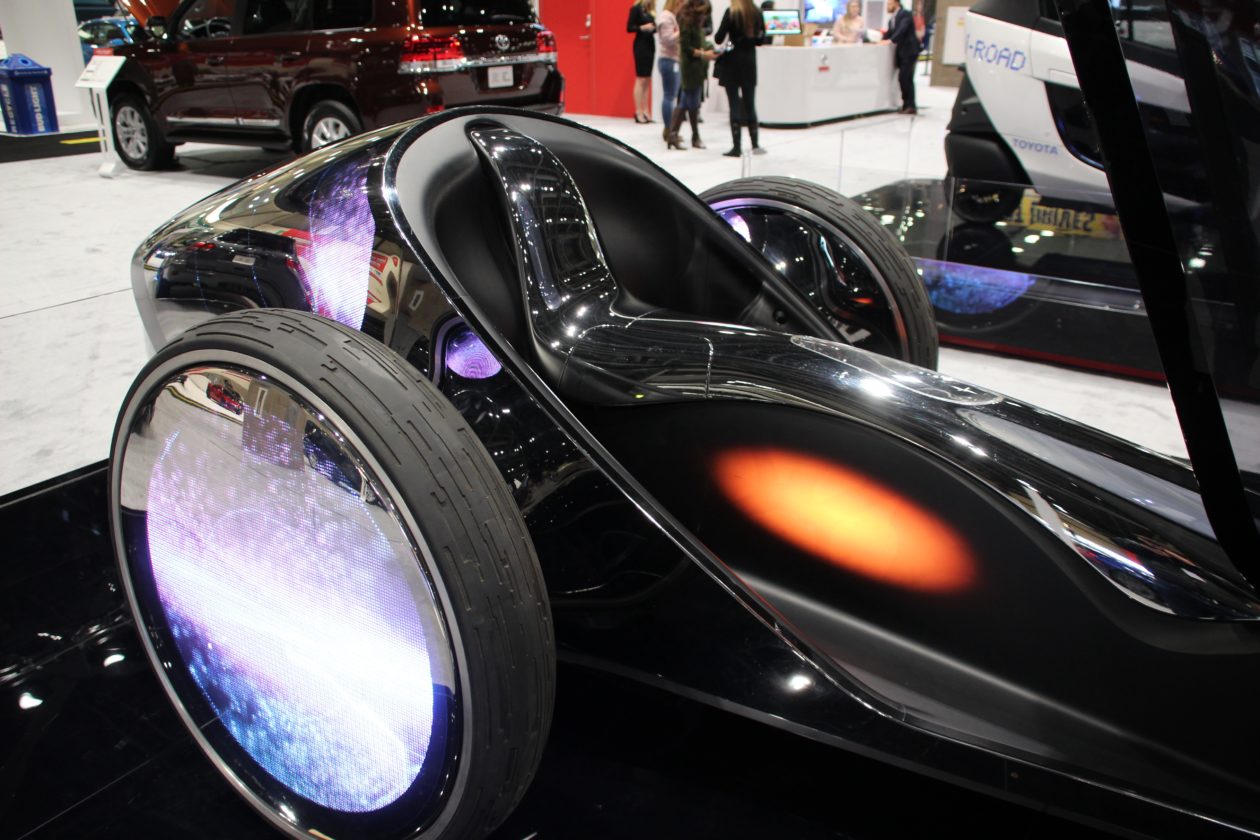 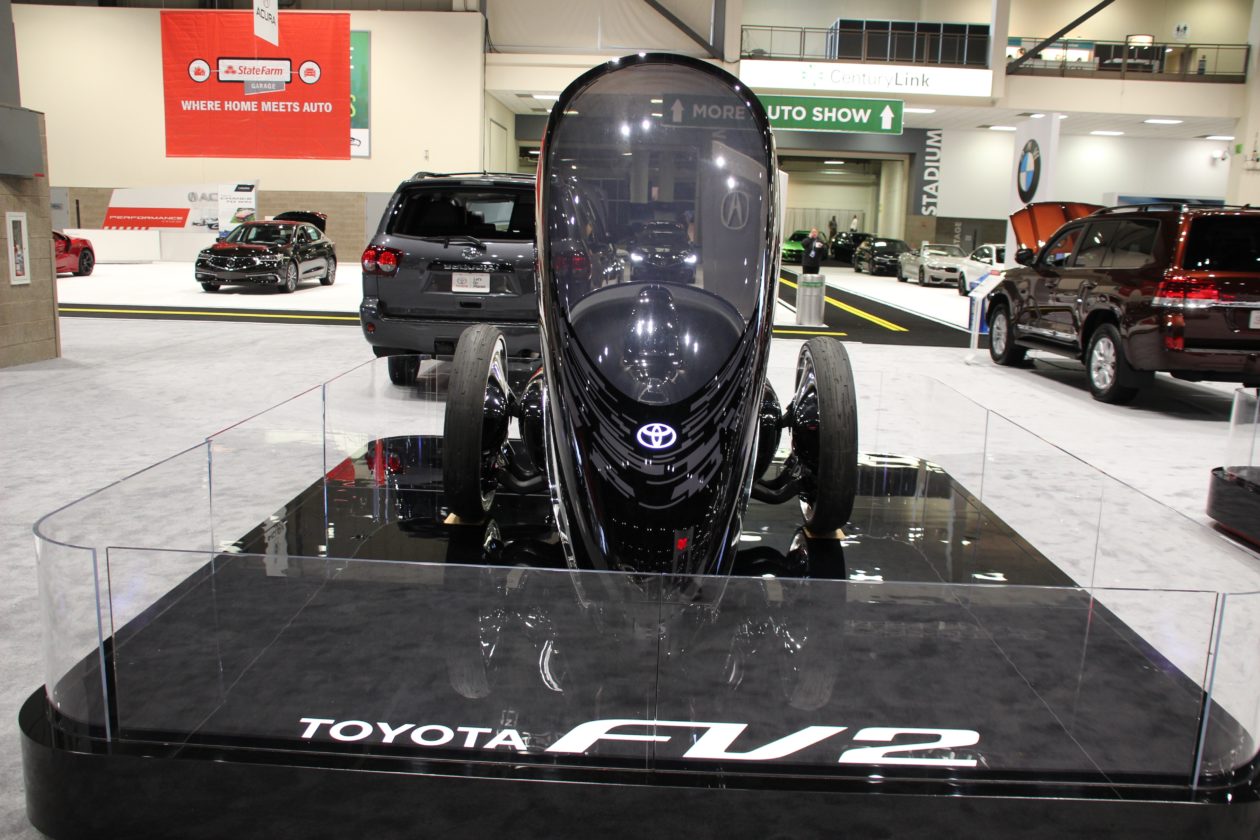 While the iRoad could very well be available to customers soon, the FV2 seems to be much more a concept. Toyota’s initial vision for the FV2, which you can watch below, features voice and image technology that can sense a driver’s emotions and “learns to anticipate your needs and intentions,” according to the company. 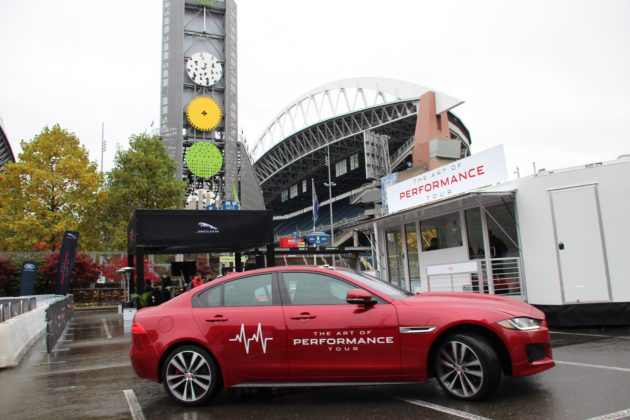 Walking around the car show was fun. But my adrenaline got going when I stepped outside.

Seattle is the latest stop for Jaguar’s “The Art of Performance Tour.” The British carmaker staked out half of the parking lot just north of CenturyLink Field and built its own circuit of sorts that lets people test their driving skills with two of Jaguar’s new high-powered sedans. 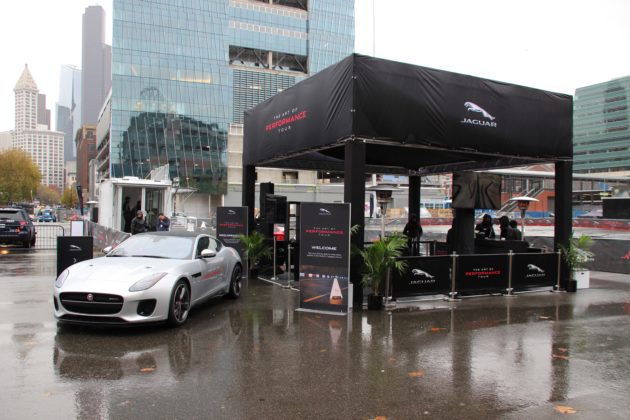 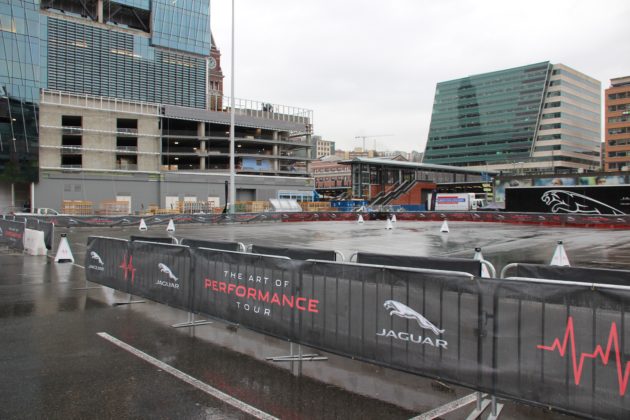 The entire experience is made possible with cool technology. To start, drivers head toward two cones lit up with green LED lights. At the same time, another pair of cones light up in blue, notifying the driver of which cones to go through next — this is how you know where to drive on the circuit. This video shows how it all works.

Jaguar embedded the cars, a F-Type and XE, with both WiFi and GPS sensors to track movement. This allows the company to not only measure a driver’s speed, but also accuracy through the cones, as the GPS system knows the dimensions of each car and the position of the cones. The idea is to be quick, but also go through the cones perfectly straight. 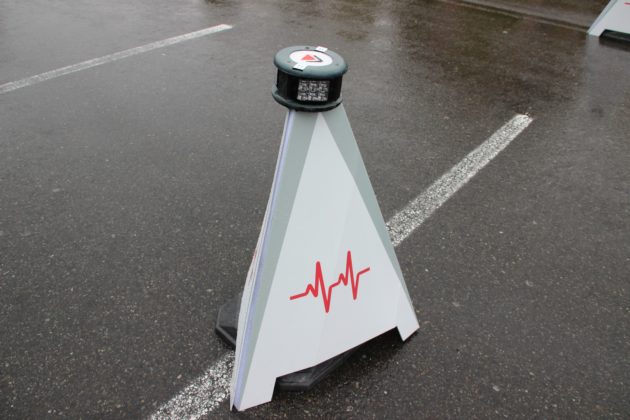 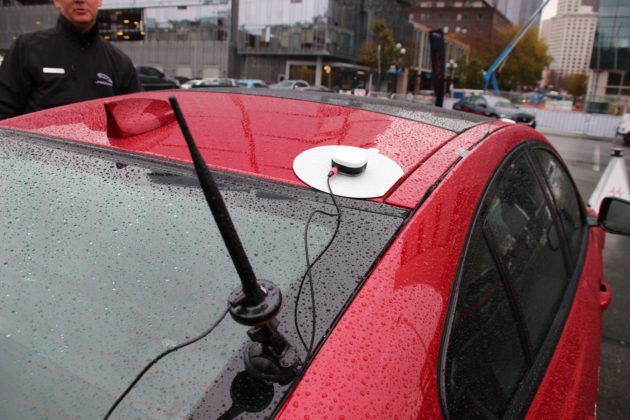 After hopping in an XE with Adam, a Jaguar rep, off I went. Even with the Seattle rain creating a slick surface, the XE handled like a beast.

I zoomed from green light to green light, trying to position the vehicle best for the next set of cones as Adam provided some tips. Holy crap, this was fun. 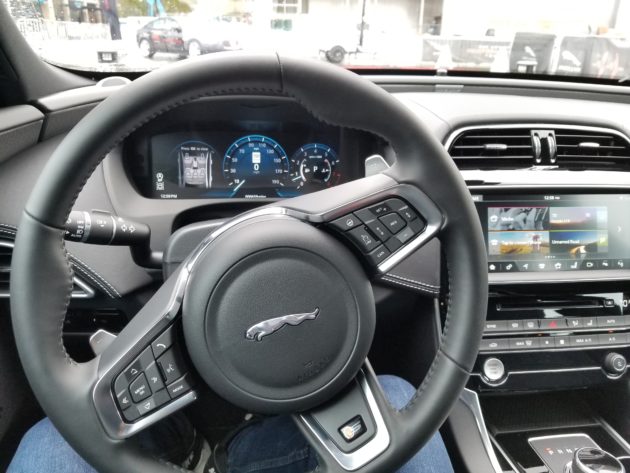 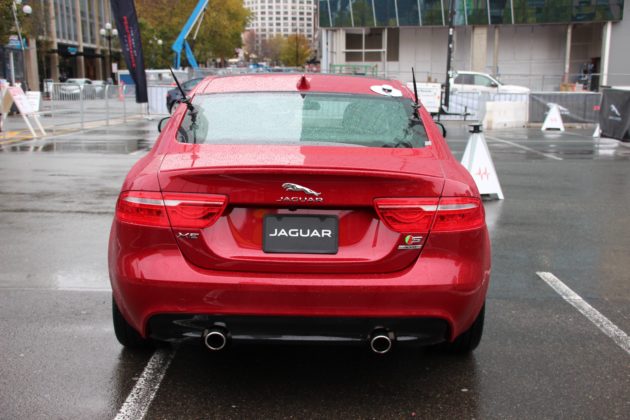 Afterward, I liked seeing my driving results on a screen, where Jaguar calculated total time, distance covered, and accuracy. I finished in 1 minute, 30 seconds (less is better); I covered 582.82 meters (less is better); and my accuracy was 68.67 percent (higher is better). There was also a map of my driving path. 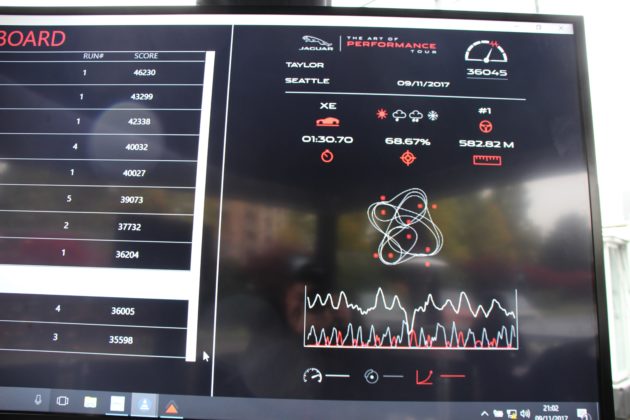 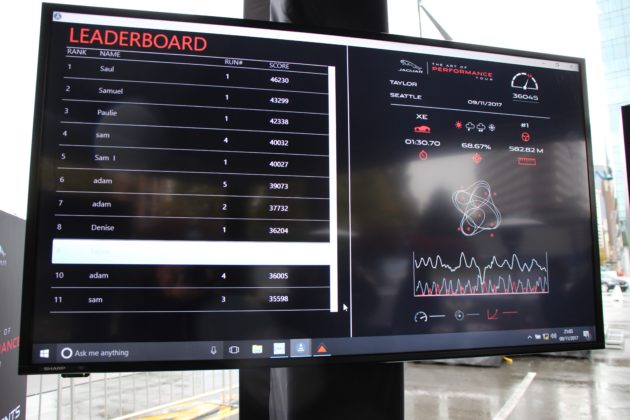 My total “score” was around 36,000 — Adam said anything above 40,000 meant that you’re putting the car in the right places, and being smooth and quick. I have work to do. 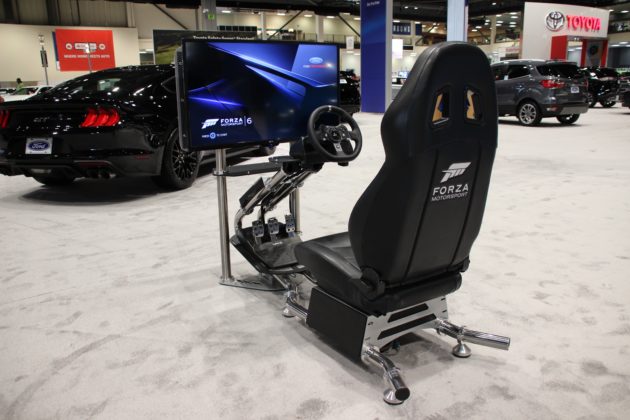 As I was leaving the show, something caught my eye in the Ford booth: video games.

Ford set up an Xbox with Forza Motorsport 6 — and, most importantly, a steering wheel and clutch pedal accessory made by Logitech.

It was funny going from racing in real-life to doing it in a virtual world, but I forgot how much a difference the steering wheel can make when playing games like Forza — it’s very much like being in an arcade. This wasn’t quite as fun as the Jaguar experience, but I could have played for hours.

You could only use Ford vehicles in the game — a nice marketing move by the American carmaker. The only thing missing was the new Xbox One X, the latest Forza game, and a 4K TV — Forza Motorsport 7 looks pretty incredible on Microsoft’s newest console.